A.P.C. founder, Jean Touitou, has dubbed an assortment of items from his forthcoming fall ’15 menswear collection, “Last Niggas in Paris.”

The Tunisian-French creative director unveiled the controversial collection during the final weekend of fashion week in Paris.

According to Style.com, Touitou presented four models, each wearing unique camel overcoats, gray sweatpants and A.P.C. co-branded Timberlands. He explained that the inspiration behind the pieces came from “the hood” and the 1972 film Last Tango in Paris.

While holding up a sign that read: “Last NI##@$ IN PARIS”, Touitou addressed the audience.

“I call this one look ‘Last Niggas in Paris.’ Why? Because it’s the sweet spot when the hood—the ‘hood—meets Bertolucci’s movie Last Tango in Paris,” he said. “So that’s ‘Niggas in Paris’ and Last Niggas in Paris. Oh, I am glad some people laughed with me. Yes, I mean, it’s nice to play with the strong signifiers. The Timberland here is a very strong ghetto signifier. In the ghetto, it is all the Timberlands, all the big chain. Not at the same time—never; it’s bad taste. So we designed Timberlands with Timberland…”

Touitou, doesn’t believe the title of the items is racist. In fact, he says that the collection is actually a sign of his admiration for West and their friendship.

“I am friends with Kanye and he and I presented a joint collection at the same place, one year ago, and that this thing is only a homage to our friendship,” Touitou said “As a matter of fact, when I came up with this idea, I wrote to him, with the picture of the look and the name I was giving to it, and he wrote back immediately saying something like, ‘I love this vibe.'”

Check out images of the “Last Niggas in Paris” collection below: 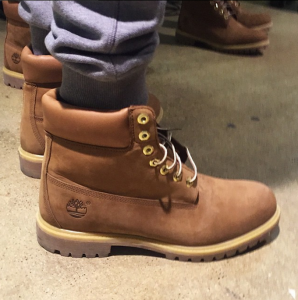