With the release of his debut album scheduled for later this year, Grand Hustle rapper Travis Scott will soon embark on his “Rodeo” tour.

The tour will make stops in 23 different cities beginning on March 1.

The “Rodeo” tour is scheduled to hit venues in Chicago, IL, Houston, TX, Philadelphia, PA, and a handful of other North American cities.

Joining the G.O.O.D. Music producer on the tour will be Rich Gang rapper Young Thug and producer Metro Boomin.

Although a release date for Scott’s Rodeo album remains unknown, the musician did reveal that his debut will be released in March, during an interview with CR Fashion Book weeks ago. He also spoke with the publication about the concept for the album.

“It’s like a Beyoncé concert,” Scott said during an interview published earlier this month. “The carnival, the livestock, and the show are all parts of the event. I feel like that’s how my life is. The carnival is like my imagination—it’s the drive behind my vision. Even though I don’t feel like I’m at a point where my shit is at an all-time high, we’re working to get there. We are working to get to the level of where your magazine is and to stand on that level. The livestock show is the road to get to where I’m going. At this point, I’m riding a bull for just eight seconds and it’s hard as fuck. But we made it.”

Dates for Travis Scott’s “Rodeo” tour can be found in the flyer below. 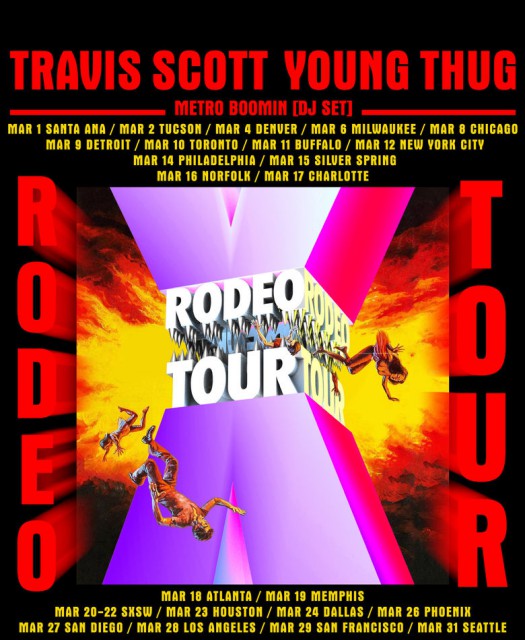