Nearly two weeks after dropping the video for anthemic homage to his home state, “I’m From Texas,” Houston rapper Doughbeezy (real name Tai Carr) was a vicitim of a home invasion Tuesday (January 20) that left one suspect dead. The other has been arrested.

According to reports, Doughbeezy was pistolwhipped during the incident. He then fatally shot one of the two suspects. Doughbeezy is now in an area hospital with severe lacerations on his face.

The co-owner of Headwreckas Worldwide spoke on the incident via his Instagram page today (January 21).

The suspect who fled the scene, Marquez Romero Heckard, was arrested inside a nearby Wendy’s restaurant. Heckard faces three counts of aggravated assault with a deadly weapon and one count of aggravated robbery.

Receiving co-signs from Bun B, Big K.R.I.T., Killa Kyleon and Dom Kennedy, among others, Dough gained notoriety via 2010’s Reggie Bush and Kool-Aid mixtape. Early last year, he dropped Footprints on The Moon, which features the local hit “I’m From Texas.”

Doughbeezy’s Instagram[Before Deleting] post and the video for “I’m From Texas” are below. 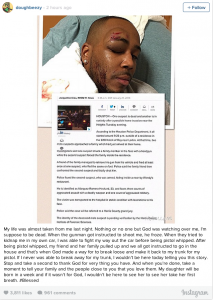 The Houston rapper went to Twitter to thank fans for support as well as ask for privacy for himself and the family involved.

Thx for all the prayers. I am good. I wont discuss the incident any further. Pls respect me & my families wishes/privacy @ this time Thank U