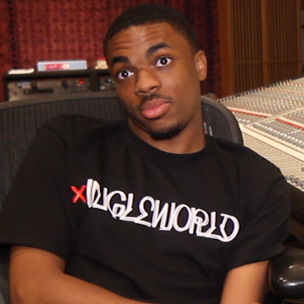 Speaking with HipHopDX ahead of his Converse Rubber Tracks performance at the Echoplex in Los Angeles this past weekend, Vince Staples broke down his thoughts on the ongoing controversy of Iggy Azalea’s place in Hip Hop and the issue of cultural appropriation within the genre.

“I do not care,” Staples said in a clip that debuted as a part of today’s DX Daily. “White people invented basketball. I don’t care. Why would I care? She getting paid. We speak English, we go to Christian churches. It’s the same thing. Yeah it’s fucked up but you just now getting a whiff of that? That’s what it is. Nobody got mad when Eminem did it. Why you mad at her ’cause she a girl and Eminem would probably slap you? It’s more than that. Azealia Banks got a point with the stuff she saying. Everybody got a point. But at the end of the day we all just got jobs. That’s the way I look at it because a lot of things are culture, you never know where none of this shit come from, man. Of course Hip Hop is something that’s very important to Black people but it’s a lot of other things that are important to us that we tend to neglect like family structure. It is what it is. It happens.

“Everybody entitled to their opinion,” he added. “I stay out of all that. I don’t wanna argue with nobody. I wanna be able to pay my rent and I need a carwash right now so I’m ’bout to go do that. I’m just happy I’m able to do the little stuff. I don’t care, all that bigger picture—ain’t nobody give a fuck when my homies got shot in their face. So if you talk about, ‘What you care about?’ That’s what I care about. When the police start paying for some funerals and something like that instead of softball games then I’ll probably have something to say about that issue. It just don’t relate to me. I come from a different place. We got white people [who] gangbang. We got white boys from the hood. Are they appropriating Black culture? Yeah, but them is my niggas because they care just as much as me. Who are you to say what somebody actually love? You can’t say what touched anybody any kind of way. I don’t think that’s up to me personally. That’s not up to me. She might love Hip Hop to her core. That might be what she always wanted to do when she was younger because she seen it on the TV but that’s the reason everybody wanted to do it. We just happen to look like them.”