According to Australia-based publication WA Today, a photographer on the popular photo and video-sharing site Instagram isn’t too pleased with Atlanta rapper Ludacris after a picture of his was posted on Luda’s account without any credit or acknowledgement.

The picture Ludacris posted, which merely featured a series of emojis as its caption, shows the coastline at North Beach in Perth, Australia. 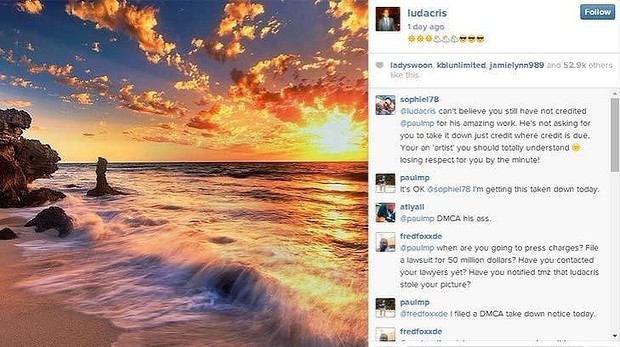 The man who took the picture, photographer Paul Pichugin, says he was made aware of the fact that his picture was reposted by Ludacris after one of his Instagram followers tagged him in the rapper’s picture. Pichugin revealed that he was initially excited about his photo being shared, but says his excitement withered when he realized he received no credit.

“One of my Instagram followers spotted it and tagged me in Ludacris’ post so I could see it,” Pichugin said while speaking with WA Today. “At first I was pretty excited, but when I saw there was no credit I thought that wasn’t cool because it doesn’t actually do anything for me.”

Pichugin has since filed a Digital Millennium Copyright Act takedown notice with Instagram in the hopes that his picture will be removed from Ludacris’ account.

“In general, it’s absolutely essential that photographers are credited so that people know who took the photo and who to go to if they want similar photos taken for a business or tourism campaign…There seems to be a very basic misunderstanding of copyright on the internet, that because something is posted on a public website it’s OK to use,” he said. “That’s not at all true.”

As of today (July 20), Pichugin’s picture no longer appears to be on Ludacris’ Instagram page.