Following initial reports that the project would be released on the first of the month, Gucci Mane and Young Thug released their collaborative mixtape Young Thugga Mane La Flare today (April 20).

As the title alludes, the mixtape is a full-out collaboration and features exclusive material from both artists on every track. The single feature comes from fellow Atlanta rapper PeeWee Longway on the song “Took By A Bitch.” Longway’s “Servin Lean” single was also recently remixed by A$AP Rocky.

The thirteen-track mixtape is hosted by DJ Holiday and was reportedly scheduled to release alongside a solo mixtape from Gucci Mane called Brick Factory Vol. 1 earlier this month. Young Thugga Mane La Flare is the first full project from Young Thug since Black Portland released in late January. The mixtape is the latest in a string of projects released while Gucci Mane remains behind bars.

Last month an article published by Noisey detailed Young Thug’s complicated label situation with a note from 1017 Brick Squad distributor Ronald “Caveman” Rosario. “The fucking reality of it is Thug is signed to 1017, regardless of where he wants to go,” he said. “So regardless of what people want to say, what they want to Tweet or Instagram, Gucci is still gonna get paid. Thug is running around saying Rich Gang, but a lot of people don’t understand that Rich Gang is a management company. It is a management deal. It isn’t a record deal. So Birdman and his team are now representing him, but regardless of his representation he’s still signed to Gucci.” In the same interview Rosario claimed that Gucci Mane made “about $1.3 million” from music in 2013.

Cover art and a full stream of Young Thugga Mane La Flare are available below. 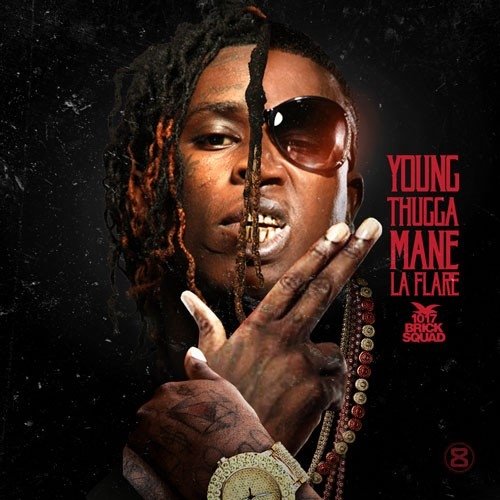