In 2009, Lil Mama was criticized by many when she unexpectedly joined Jay Z and Alicia Keys on stage at the MTV VMAs without being prompted to be a part of the performance. During a recent interview with Billboard, Lil Mama speaks about what she learned from that incident.

“The 2009 VMAs was an example of my courage, my free spirit and my free will,” she says. “I had been in the audience with all kinds of artists and I was so new to the industry. I was so raw at that time. I was so Brooklyn and so Harlem at that time that when someone was singing about New York and being inspired, I took those words in a literal sense. It really touched my heart. But the message wasn’t meant for me to respond in that way. I later learned that this is an industry—everything is planned and everything is a business. However you may learn your lessons, you take it and you grow from it. I feel like I’ve truly grown. Not in a sense that I’m more confined. I just know that there’s a time and there’s a place. No matter what someone’s singing about or no matter what someone is saying, they may not even mean it. They may just be saying it because they’re entertaining. And you’re in a place where you’re responding to something that’s not real.”

In 2009, Alicia Keys addressed Lil Mama’s decision to join the duo on stage. “I can appreciate her overwhelmed and inspired, but we would have preferred her doing it from her seat,” Keys said at the time. 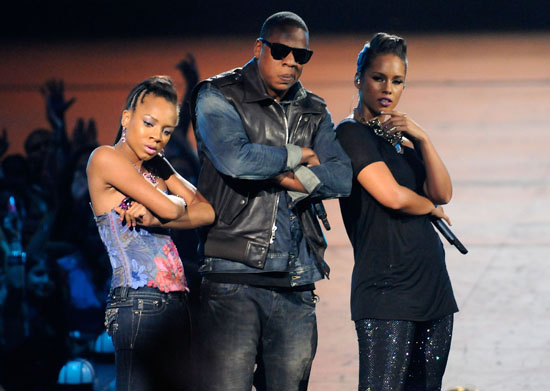 Since this 2009 VMA incident, Lil Mama has found many changes in her life. She’s gone from rapping to acting and she’s experienced hardship in her personal life.

“The loss of my mom definitely affected me professionally, because at that point I felt like I wasn’t fully equipped as a woman to make decisions for myself,” she says. “The mental and emotional imbalance of being hurt by the loss of my mom and trying to be prepared for business wasn’t there. I was pretty much all over the place in a sense…It was difficult to put out a project at that time. Not only because of my age, but because at a moment when the best thing in the world was happening to me, the worst thing in the world was happening to me simultaneously. I had a very uncomfortable balance between the success and acceptance of my music and my mother suffering with cancer. She was basically slowly dying. It was a really hard experience for me.”

Through some of her hardship, Lil Mama says she has been able to count on others, including MC Lyte.

“There were people around me that helped me and believed in me,” Lil Mama says. “My dad was there for me and then I met my mentor MC Lyte. At one point, we were just really good friends. People would tell her, ‘You know, Lil Mama really reminds me of you.’ And they would tell me, ‘You really remind me of MC Lyte.’ And because of that connection from people comparing us all the time, we linked up. She would see how I was doing periodically. And more recently, she became a force in my life, a person who gives me direction, and a great mentor. Upon [MC Lyte’s] presence, I realized that a woman’s advice and a woman’s outlook is very important in my life.”

Lil Mama was interviewed recently by Billboard as part of the publication’s Ladies First: 31 Female Rappers Who Changed Hip-Hop article. Yo Yo, MC Lyte, Gangsta Boo, Ms. Jade, Angel Haze and Charli Baltimore have also been included in the series.