Eminem joined a cast of performers on the set list that included but was not limited to Nas, Teddy Riley & Blackstreet, members of Pharcyde, and Busta Rhymes. Ma$e and Diddy also reportedly reunited on stage to perform their collaboration “It’s All About The Benjamins.” MTV reports that Macklemore attended the party, but did not perform on stage. Last night’s launch party closely precedes the airing of the 56th Annual Grammy Awards tomorrow evening (January 26).

Eminem, who has been nominated for an award within the Best Rap Performance category for his hit song “Berzerk,” unveiled his public affiliation with the company in August of 2013 with a collaborative commercial during the MTV Video Music Awards announcing his latest album, The Marshall Mathers LP 2. Billboard cites a previous interview with the rapper’s manager, Paul Rosenberg, in an explanation of the partnership. “The partnership with Beats is the relationship with Em, Dre and Jimmy from the beginning of time,” he said. “That’s really where that comes from. When we were discussing who the potential partners were going to be for this record, it was the first time that Beats was able to come in and say ‘Hey, we’re the right partner for you, because there’s obvious natural synergy, and by the way, we’re a really big company now and we can do this.’”

Beats Music, a paid, subscription-based streaming service, was spawned from Dre and Iovine’s Beats Electronic. Beats Electronic, which is best known for its line of personal headphones named after the rapper/producer, joined with Monster Cable in an exclusive manufacturing partnership for three years between 2009 and 2012. Since the resolution of that contract, Beats has manufactured its own products. In late 2013, the company appointed a new Chief Operating Officer in Matthew Costello, a man previously employed by Ikea and the cell-phone manufacturer HTC which formerly owned a majority stake in the company.

Beats Music is currently available for $9.99 per month and is advertising a catalog of 20 million songs. The service hopes to distinguish itself from other streaming subscriptions like Pandora, Spotify, and Slacker Radio with its own proprietary algorithm of curating music for customers. Despite its launch earlier in the week, the service has already suffered connectivity issues for some users. The company issued a statement encouraging users that were able to connect to continue utilizing the service and promised a swift fix for those who were unable to use the subscription. Beats Music also extended its free trial period to 14 days from its original week-long promotion following the announcement.

The service was launched with the help of a $60 million investment from Warner Music Group owner Leonard Blavatnik’s Access Industries. Billboard also reports that besides advertisement slots throughout the NFL playoffs, Beats Music has purchased a $4 million 30-second Super Bowl advertisement slated to run on Sunday, February 2.

HipHopDX has obtained a photograph of the setlist for the Los Angeles event, which can be seen below. 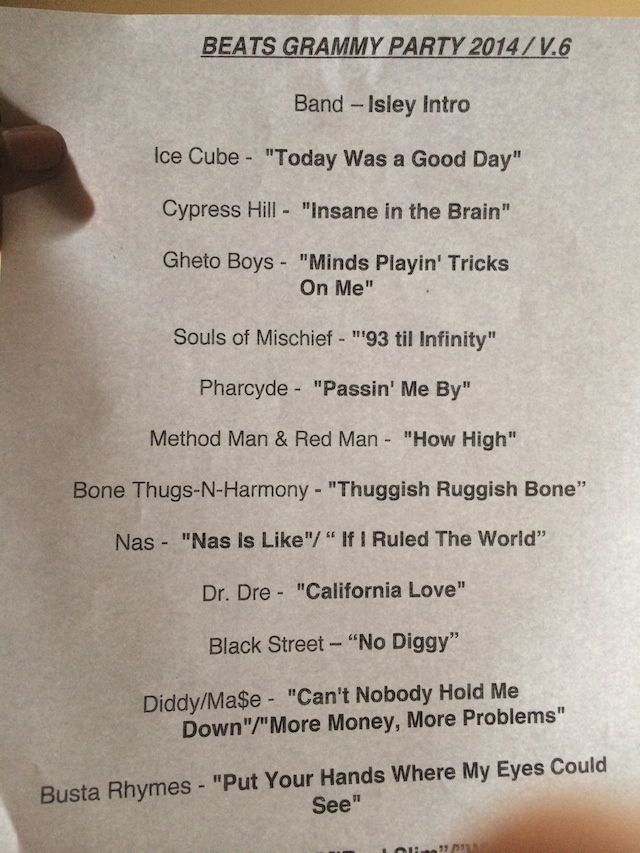