YG, who is readying his My Krazy Life album release, recently spoke about how he got Drake on a track for the project.

“I feel like he probably was fucking with it so hard because he heard the shit,” YG said during an interview with Complex. “He was hearing about me on the West Coast, he’s out there a lot. All these little females that be fucking on me, they’re playing my shit. That’s how it happens most of the time. There’ll be artists from out of town that will move out there, and they’re living the life, having females over, and they ask, ‘Who the nigga out here?’ And the females will tell you.”

During the interview, YG also said he is the face of the West.

“They look at me as the face of the West, like the new West Coast,” YG said. “What Snoop and them did back in the day, they look at me as the new version of all that shit that was going on because it’s like the same type of shit. It’s just we bring our own sound and the music is different. But the shit I rap about, the lifestyle, is all the same that they was rapping about back in the day. And the way I paint my pictures in my videos, it’s similar to that. So I’m giving the people the same type of feel. The culture, the streets. and that’s what I am. The West Coast.”

While YG feels he’s the face of the West Coast, he also takes inspiration from albums from the East Coast. When speaking about his new work, YG said his album will be a great one.

In an interview with HipHopDX published yesterday (November 28), YG spoke about what he’s thankful for.

UPDATE: YG’s My Krazy Life is set to be released March 18 via Def Jam Recordings. The project is slated to be executive produced by Jeezy.

UPDATE #2: YG has released the cover art for his forthcoming My Krazy Life album. The set is scheduled to feature the RIAA-certified platinum single “My Hitta” with Jeezy and Rich Homie Quan, as well as “Who Do You Love,” which also features Drake.

The My Krazy Life cover art is as follows. 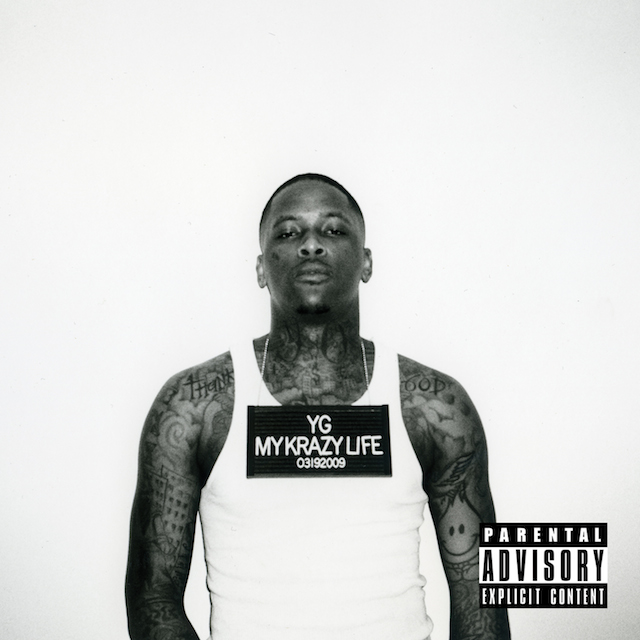 UPDATE #3: YG has released the tracklisting for his My Krazy Life album, an album set to include appearances by Jay Rock, ScHoolboy Q, Kendrick Lamar, Jeezy, Rich Homie Quan and Drake. The tracklisting can be found below, as per MissInfo.