Action Bronson said on Twitter today (October 1) that Blue Chips 2 will be released “The First Day it rains in NOVEMBER,” and that it will be a free release.

“For the people who liked Blue Chips, [the sequel] is gonna be a similar vibe,” Party Supplies said during an interview with nahright.com. “We recorded it in the same spot in Williamsburg. We never stopped the same process. Nothing’s changed.

“I’ve just been recording endless amounts of material with him,” Party Supplies continued. “I can tell you, [what we’ve already recorded] is absolutely absurd. I think it’s crazy. We took it to another level. Blue Chips was sick, and Blue Chips 2is gonna be even better. He’s having even more fun on this one than the last one.”

Action Bronson’s tweets from today regarding Blue Chips 2 are below.

BLUE CHIPS 2… The First Day it rains in NOVEMBER. Be ready.

IF U WANNA LAUGH, CRY, HATE ME, LOVE ME, WANAA FUCK ME , WANNA FIGHT ME, LOVE RABBITS THEN ULL CRASH UR CAR TO BLUE CHIPS 2!!!!! I PROMISE.

“We’ve been recording for a year and a half now, almost two years [for Blue Chips 2], which is crazy because he tweeted we were ten songs in last June, and we’ve kept working [since then],” Party Supplies says. “He’s been touring a lot, but the weeks that he’s been in New York, he’s been coming through, and we’ve just been putting the songs in a folder and [keeping] the ideas going.

“We have some joints,” Party Supplies continued. “Most with samples, but some without. If some of them end up on [his debut label] album, and others end up on Blue Chips 2, it’s his decision. But [I can say] the intro to Blue Chips 2 is really awesome. And a lot of the samples are things you wouldn’t expect people to be rhyming on, like crazy stuff we grew up on back in the day.”

BLUE CHIPS WILL DROP WITHIN THE FIRST FIVE DAYS OF NOVEMBER…. NO MATTER WHAT.

UPDATE #3: Action Bronson has announced that Blue Chips 2 will be released November 1.

UPDATE #4: Action Bronson’s Blue Chips 2’s cover art has been confirmed. It can be found below. 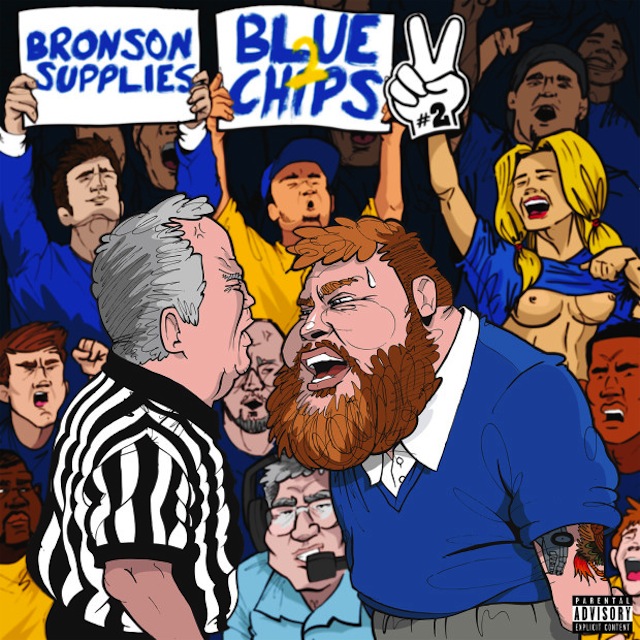 UPDATE: Action Bronson and Party Supplies teamed up for Blue Chips 2. The mixtape is available to stream below via livemixtapes.com, following the tracklisting.