With a newly private Twitter profile, Chicago wordsmith Lupe Fiasco let loose another Twitter rant as he he sent out dozens of Tweets last night (August 12), attempting to impersonate a handful of rappers including Rick Ross, 2 Chainz, Tyler, The Creator, and Pusha T.

A sampling of Lupe’s rapper “rebuttals” can be found below (via Imgur.com). As of now, it does not appear that any of the artists who Lupe impersonated have responded to his Tweets.

The Food & Liquor II rapper also commented on fans being “easily impressed” and shared his thoughts on the state of rap as he stated, “I really don’t want to but fuck it. We all rap. Some of us just rap to rap but others of us RAP.”

Lupe was also asked by one fan to share his thoughts on Kendrick Lamar’s verse on Big Sean’s “Control” to which he replied, “I liked it!” 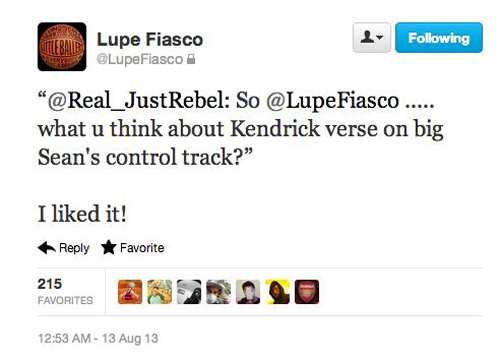 The Windy City emcee’s latest Twitter rant comes shortly after he voiced his thoughts on race and the George Zimmerman trial and as a result switched his Twitter profile to private following the backlash which followed.