This September, the late Eric “Eazy-E” Wright would have turned 50 years old. Tragically, the Compton, California rapper/record industry mogul died from AIDS over 18 years ago. However, that does not stop Eazy’s family and friends from celebrating. A plethora of former Ruthless Records artists and affiliates have confirmed their support for a third-annual September 6 event in Santa Ana, California.

N.W.A.’s DJ Yella will host the evening’s affair at Malone’s Bar & Grill. Yella, a member (with Dr. Dre) of the World Class Wreckin’ Cru, was one of Eazy’s first Ruthless signings. Other acts to perform include Above The Law front-man Big Hutch (a/k/a Cold 187um), Kokane and H.W.A. (Hoes With Attitude). Eazy’s “Real Muthaphuckkin’ G’s” collaborator B.G. Knocc Out will also be performing, as well as Eazy’s third son, Yung Eazy-E.

According to the flyer, invitations have also been sent to Eazy’s business partner Jerry Heller, Bone Thugs-N-Harmony, Dr. Dre, Ice Cube, Playa Hamm, and Kid Frost, among many others.

The event is presented by Eazy-ECPT.com and Ruthless Propaganda, makers of the upcoming Ruthless Memories documentary. Tickets are available at RuthlessFamily.com.

The flyer is below: 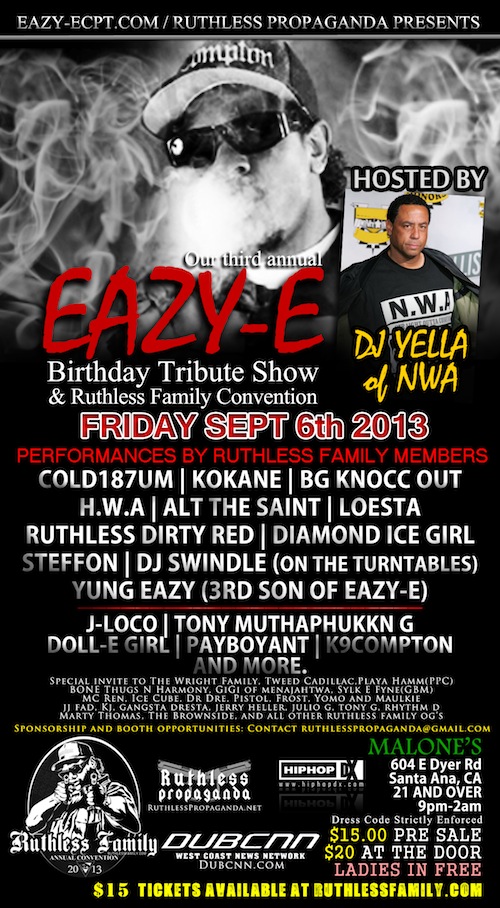