Nearly six months after Ahmir “?uestlove” Thompson revealed that The Roots were working on an album with veteran Rock & Rock/New Wave singer/songwriter Elvis Costello, additional details have emerged. According to Radio.com, the album is titled Wise Up Ghost, and will be released through the famed Blue Note Records imprint.

Costello penned late ’70s hits such as “Watching The Detectives,” “Radio, Radio” and “Pump It Up.” The last song was among the samples on “Egg Man,” from Beastie Boys’ Paul’s Boutique LP. Costello, an English musician is also considered a pioneer within Punk’s first wave.

The album is slated to release on September 17. This is The Roots’ first effort, as a group and collaborative, since their 2011 effort with John Legend, Wake Up!. Previously, the Philadelphia, Pennsylvania natives have also released an effort with Betty Wright.

Additionally, the band has plans to release their own album later this year, said to be titled, & Then You Shoot Your Cousin. This Friday (May 31), the band will be honored by a mural on Philly’s Broad & South Street’s, that is currently being painted.

UPDATE: ?uestlove has posted a tracklist to The Roots & Elvis Costello’s Wake Up Ghost album, via his Instragram account, as reported by OkayPlayer.com. ?uest said the following with the post, “Guess What Just Got Mastered Kids? The New #WiseUpGhost by Elvis Costello & The Roots. Gotta say this sounds incredible!”

The 14-song tracklisting is as follows: 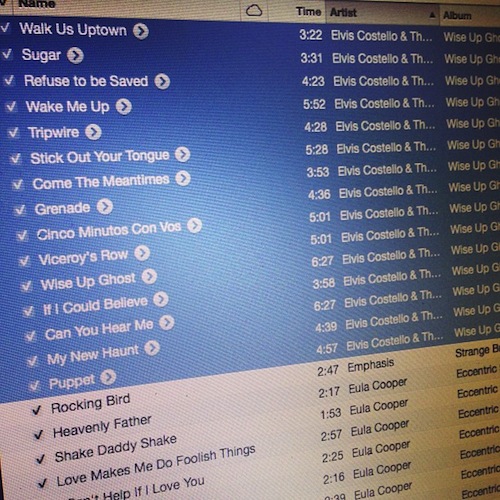