Grammy Award-winning Philadelphia, Pennsylvania Hip Hop band The Roots garnered success in the early 1990s playing sidewalk concerts on the city’s famed South Street district. Throughout the years, the group including Ahmir “?uestlove” Thompson and Tariq “Black Thought” Trotter would play at South Street venues such as Legendary Dobb’s and The Living Arts Lounge, in addition to ?uest’s deejay residency at Fluid.

Now, the 20-plus year collective will be immortalized on South Street by the acclaimed Philadelphia Mural Arts Program. On May 31, The Roots will appear alongside their Broad & South Street mural, designed and implemented by Amber Art & Design featuring Tatyana Fazlalizadeh for a public dedication. The title of the painting, as seen below, is “Legendary.” 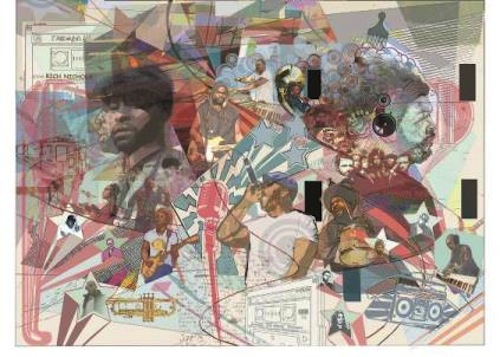 “Like many Philadelphians, we love The Roots,” said Jane Golden, Executive Director of the Mural Arts Program in a press statement. “We have enjoyed getting to know them and appreciate the opportunity to celebrate the many gifts they have given our city, our region, and indeed the world.”

The Roots are presently recording a Def Jam Records album believed to be called, & Then I Shot Your Cousin.