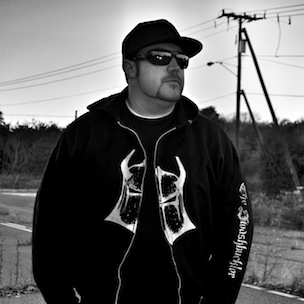 On the evening of March 13, Virginia-based Man Bites Dog Records will host their first South By Southwest showcase at The J.R. The established independent imprint responsible for albums from Copywrite, Killah Priest and Vast Aire will bring their entire current roster to Austin, Texas for a fan-focused six-hour night of music. Label founder and CEO Ryan “R.M.L.” Lynch recently spoke with HipHopDX about the event and his plans.

The complete label showcase will be complemented by nearly 1,000 specially-made cassette tapes to be given to fans at the event. The cassettes include a Copywrite Beatles-inspired side project, Hayze’s Smokers Section, Recapture The Sun by Blockhead & Illogic, Curly Castro’s Fidel, and Pussy Rich by Wais P, of Da Ranjhaz fame.

“Whoever’s in the crowd when it ends at 2 a.m., will leave with something, most likely a cassette,” explained Lynch. Additional goodies on hand will be placed in 200 “South By Southwest Survival Kits,” made specially by the Man Bites Dog. These include label logo deejay tote bags, Raw rolling papers, Zen rolling trays, Beeline hempwick, sunscreen, a label beer koozie, Krave jerky, Chronic Ice hemp tea, a label bottle-opener, RC lip balm, and a Surf School shot glass. “We have fans coming in from around the country.” The event will be filmed by Man Bites Dog’s in-housr camera crew. For the label, the affair begins before they ever reach Austin, “Kount Fif and Ciroc are gonna make a beat in the air,” Ryan reveals of this week’s travel arrangements.

Outside of the Texas music and film festival, Ryan Lynch also detailed some recent and upcoming label releases, beginning with Hayze of New London, Connecticuit. The Apathy protege has impressed the label at just 22 years old. “He’s on this weird shit. He’s a Tupac fan, who got together with Apathy. They made this mixtape called The Smoker’s Section,” said R.M.L. The EP features Street Fam affiliate Freck Billionaire, with Apathy producing/appearing on two of its eight songs, “This kid is so talented. He’s a lot like Kendrick [Lamar], where he can do a lot with his flows. Plus, he sings.”

Horsepower will follow, a prelude EP by Eddie B & Harry Fraud. The Surf School project features Mayhem Lauren, AG Da Coroner and Ap. “It’s like four songs, all original beats, and that’s warming everybody for Ed’s record that’s coming out in May.” The Horsepower EP will set-up Paper, Priff & Polo, the 14 track album to follow later this year, produced entirely by Harry Fraud, and featuring Sean Price, Termanology, and Mistah F.A.B.

Following Horsepower will be April 16’s first full-length collaboration between Illogic & Blockhead, Capture The Sun. The release will be supported by a series of Blueprint-directed documentary-style webisodes. “We want to bring in more visual, artistic expressions,” Lynch notes. Previous montage videos have been released for works by Vast Aire and Diggaz With Attitude. He adds, “People don’t want to just stare at an album cover [on YouTube].”

After a 2012 where the label released albums by D.W.A, MHz and Copywrite, Lynch was asked about lessons learned. He admitted, “Forecasting is bullshit. What you thought would happen—in this day and age—isn’t what’s gonna happen. You can forecast this on what that did. You have to approach everything D.I.Y.” The label now boasts  an in-house graphic designer, staff of interns, and a professional commercial studio. “Paying for features is super out. It’s stupid. There’s no point to it anymore,” R.M.L. also says, of the challenging climate in Indie Rap. “We’ve always tried to record our own stuff, ’cause it goes back to promoting our own brand. If you like the way this [upcoming] Blaq Poet album sounds, well, that’s Kount Fif [who mixed it].” He continues, “In this day and age, you can’t just do one thing. I like to bring in other types of business for my people…You need to act like a major [label]; champagne tastes on a budget.”

Overall, the label appears to be headed in a defined direction, something that fans at SXSW might hear on March 16 as an indication. “Our sound as a label, is getting darker—more carnage. I think we’re gonna be something for people when they’re exercising demons, going to a football game, painting the house. I want to be brutal music when you’re in your cubicle. That’s where we’re going, but it’s hostile times.” Comparing 2013 releases, R.M.L. differentiates, “Curly Castro isn’t brutal like Stu [Bangas and Vanderslice], but it’s what he’s saying. It’s gonna poke you in the eye a lil’ bit. It’s militant. Illogic is saying stuff on his record that is just so honest; he calls his dad ‘an absentee landlord.'” Going back to one of the label’s flagship artists, Ryan also says that veteran Copywrite has heard his fans. “I don’t think the next Copy album is gonna be friendly,” following an at-times, uplifting MHz LP. “We’re trying to take our music to a darker place.” Esoteric’s Machete Mode, Blaq Poet’s upcoming album, and a third solo LP from a noteworthy Hempstead, New York emcee/producer all fit the bill. “The Roc Marciano record is very greasy,” Ryan hints.