It looks like tragedy has already struck the local Atlanta Hip Hop scene just days into the new year. According to a recent report from AllHipHop, an up-and-coming Atlanta rapper Yung Teddy was found dead just hours after Tweeting about a death threat he received.

On January 2 at 10:18 PM, Yung Teddy – né Justin Mitchell, age 23 – was found dead from a gunshot wound in his apartment in Austell, a suburb of Atlanta. According to reports, Mitchell had Tweeted about receiving a text message death threat five hours before his death, writing that, “niggas wanna see me dead.”

Witness reports indicate that two men were seen at the scene of the crime directly before Mitchell’s murder. The Atlanta Journal-Constitution reports that the first suspect is a black man between the ages of 20 and 23 with a thin build and a height of between 5’6″ and 5’9″. He was wearing a grey sweater, a beanie and dark pants, and was armed with a pistol.

The second suspect wanted for questioning is black man between 5’4″ and 5’6″ tall. Reports indicate he was wearing a multi-colored beanie and a navy blue bandanna tied around his face at the time of the crime.

Anyone with information on the suspects are encouraged to contact police at the number 770-499-3945. A screen cap of the death threat that Mitchell received prior to his murder can be found below. 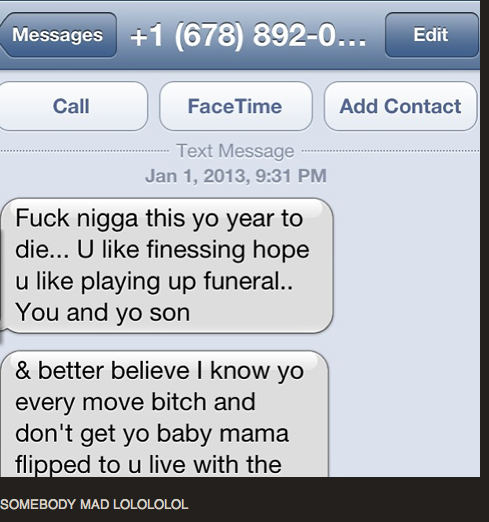