Angel Haze and Azealia Banks are the latest rappers to spar on Twitter.

After Banks interpreted some of Haze’s tweets as subliminal, the “212” spitter responded directly to Haze. “@angelhaze hahahaa.. i see ur TL… first off… NOBODY WAS TALKING ABOUT YOU. second off…. weren’t you the same girl in your interviews + on twitter saying you want to eat my pussy and shit… ??? third off…. you are not from new york. lol so whats the problem with me now? are you mad i rejected your sexual advances? Angel Haze has a crush on me. Thats it. Case Closed.”

Haze was quick to respond with her own scathing messages. “Begging me to come hang out with you and your fat friends? You still wear rocawear. U are null and Tf void, RATpunzel. @AZEALIABANKS. You don’t want this fucking work. Bitch get those fuck ass paraplegic dicks out your twat and step the fuck on. @AZEALIABANKS.”

Retweeting Azealia’s first message, Haze asked why she was on her timeline and said that Banks had contacted her before she said anything about her. “First off, we all know nobody wants that sewage sweat pussy of yours. @AZEALIABANKS. Second off weren’t you the same bitch in my texts? Bitch I got these screenshots.”

Haze finished her tirade by writing, “And you don’t want this to fade off twitter. So knock it offffff” and calling her a “charcoal skinned bitch.”

Both have deleted their tweets, but check the screenshots below. 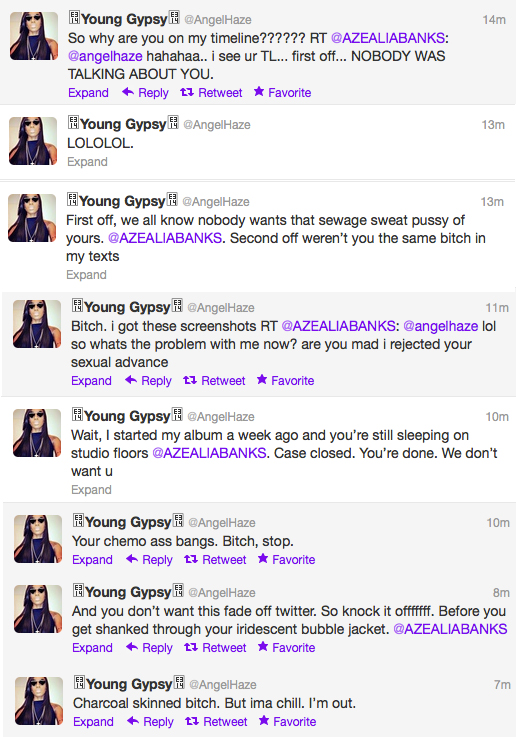 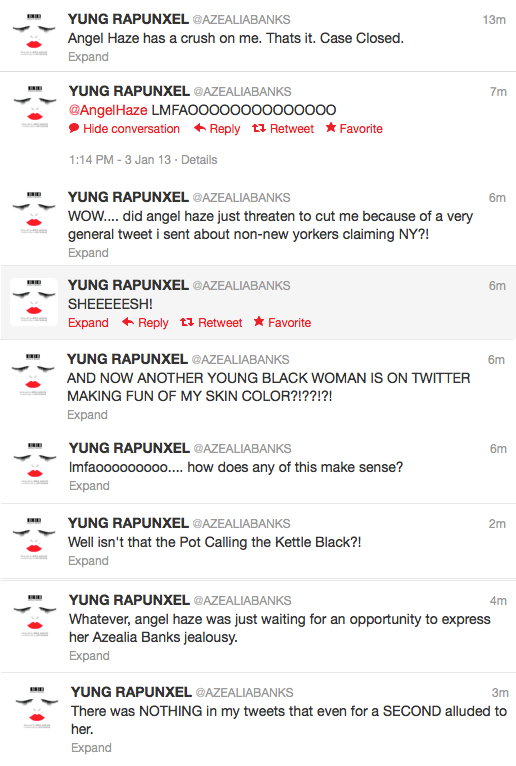