For the past two decades, the World Famous Beat Junkies has been lacing some of Hip Hop’s finest acts with acclaimed production. Now, the California-based crew is looking to celebrate their 20th anniversary in New York.

This October 21, the Beat Junkies will be hitting the Brooklyn Bowl for their 20 Year Anniversary Show and Celebration. Members DJ Rhettmatic, J. Rocc, Melo-D and DJ Babu will be rocking the stage with an assortment special guests from 8 PM onward.

Tickets will go for $15 can be purchased at the Brooklyn Bowl’s website. A flier can be found below.

In other news, Jay-Z isn’t the only Hip Hop icon who will be ushering in the opening of the Barclays Center this weekend. Hova’s own sound engineer Young Guru will be hosting a series of three shows in Brooklyn this weekend as well.

On Friday September 28, Guru will be hosting a live after party performance for the Brooklyn Nets’ new home, featuring Talib Kweli and a number of special guests. Then, on the following two days, Jay’s backing band the Roc Boyz will be throwing a pair of shows hosted by Young Guru.

Tickets for Kweli’s show, as well as the Saturday and Sunday performances with the Roc Boyz, can be purchased at the previous links. Fliers for both events can be seen below. 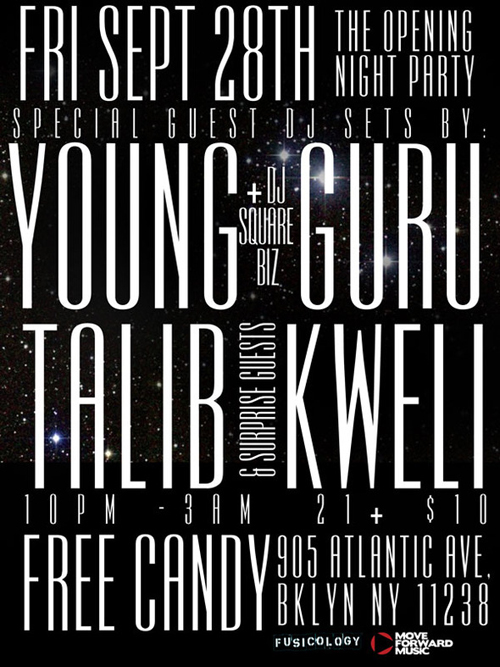 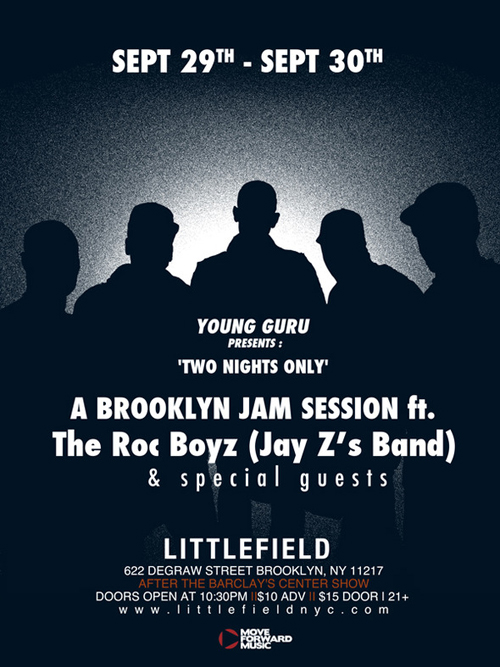 Finally, K’Naan is preparing to release his long-awaited fourth solo album Country, God or the Girl this October 16. To ring in the release of the new LP, the Somali-Canadian emcee is preparing to embark on a tour through the United States.

K’Naan is preparing to embark on a 19-date tour in support of his new release. A complete list of tour dates can be found below, and tickets can be copped through his artist website.