Veteran Hip Hop writer, reporter and illustrator Andre LeRoy Davis (a/k/a A.L. Dre) has revived his column, “The Last Word.” The Brooklyn, New York resident famously illustrated the topical Hip Hop spoofs for The Source magazine between 1990 and 2006. Sometimes humorous, sometimes controversial, these captioned illustrations were integral to the early Hip Hop journalism experience and led the established Dre to work with an array of artists and publications on design and reporting.

This month, A.L. Dre previewed his first “The Last Word” to run independent of The Source. Titled “baby-blueprint,” the work alludes to Jay-Z’s era as a father, 11 years after his Roc-A-Fella Records classic album. Dre provided a video on the caption and spoke to DX about bringing his own baby back.

HipHopDX: Can you give the history of how and when “The Last Word” came to be?

Andre LeRoy Davis: It was in 1990 and I had already been freelancing for three years at various magazines and newspapers when I came across a Source magazine at a newstand for the first time. On the grind you always opened and looked through new magazines to see if they utilized artwork and where they were located. I saw that The Source was located in Manhattan, actually just a few blocks from the newstand where I was standing. I copied the number down and called them from the nearest phone booth, I asked them if they looked at portfolios and scheduled a meeting in a half hour. I went to their new offices on Broadway, met with the then editor John Shecter, showed him my work, had a conversation and he said that he had an idea for an illustration in the back of the magazine. I sketched down and illustrated a visual of his idea about Eazy-E’s phone being bugged by the F.B.I. He liked the sketch and asked if I could have a finished illustration in a few days. The rest is history, as I received a monthly call for an illustration for the last page in the magazine for the next 16 – almost 17 years.

DX: What prompted you to bring “The Last Word” back. Do you think Hip Hop needs a sense of humor with art/visuals again?

Andre LeRoy Davis: Every day, week and month since I left The Source ideas pop into my head like clockwork, but I just concentrated on other creative endeavors, teaching and drawing for the kids. Being out and about and then on Facebook folks started reaching out to me about my work and thanking me and that lead me to create a fan page where folks started requesting that I post specific “Last Words” from previous years. Towards the end of 2011 there was so much going on in Hip Hop that my brain like “Rainman” [from the film of the same name] was being flooded with ideas, visuals and jokes. I decided that in 2012 that it was time to once again draw specifically for the Hip Hop masses.

DX: Tell us a little bit about Jay-Z’s influence. Is this the first time he’s been your subject?

Andre LeRoy Davis: Jay-Z’s influence… Hmm, I suppose you mean in the Rap game, right? Well as with anyone who has worked hard, showed others their deserved respect and is skilled at what they do, Jay has been a subject that I have enjoyed drawing, lampooning and pulling his card when necessary. I think I have illustrated him at least four or five times previously and the Jay-Z vs. Nas (LL Cool J vs. Kool Moe Dee battle revisited) was my favorite Jay illustration up until the idea and illustration for Jay-Z and the “Baby Blueprint” album spoof was created. I think it”s always important to give respect to those who proceeded you, even when you go on to get respect and influence those who come after you… 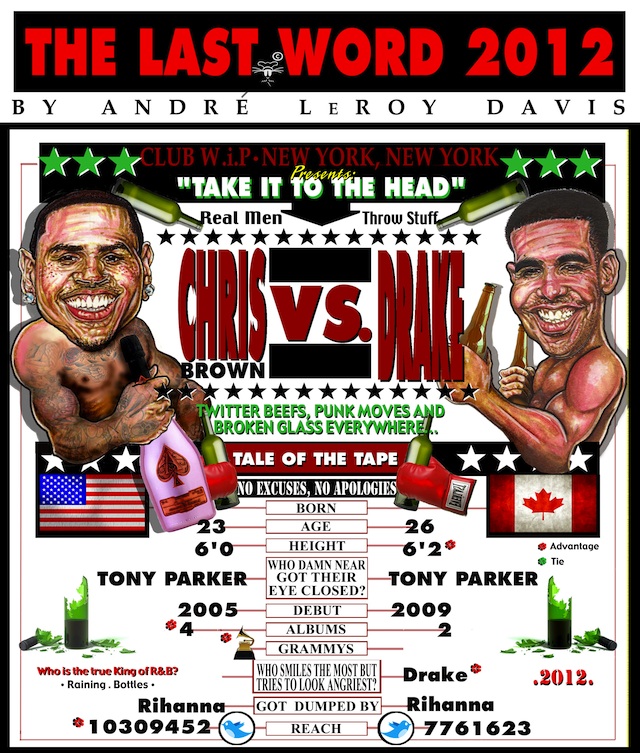