Now is the time where things get interesting. The dates are below, but some movements have happened in the release dates world that are worth mentioning. First off, Kid Cudi is back, prepping an album called Indicud. He announced his fourth album title via Twitter, but details are still up in the air on the project. Meanwhile, Mobb Deep’s Prodigy will drop H.N.I.C. 3, his third solo album on July 3rd. The album marks his first full-length release on Infamous Records. The tracklist was revealed, and appearances from Havoc, T.I., and Wiz Khalifa are included in the cameos. Fans of Slaughterhouse will have to wait a little longer for welcome to: Our House. While the album was supposed to arrive this week, we’ll have to wait until July. In other news, Pink Slime will be coming. That’s the title of the EP Mac Miller and Pharrell have planned. Mac told his fans on Twitter that the first leak off Pink Slime will be coming soon and it has. Check out “Onaroll.” 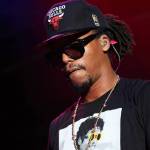