Earlier this year, Action Bronson and producer Harry Fraud turned heads when the duo linked up for a song with RiFF RaFF titled “Bird On a Wire.” Now, it looks like the rising New York artists have something bigger planned.

Harry Fraud announced to The Source earlier today that he and Bronson are planning to release an album together this summer titled Saab Stories. Although Fraud kept tight-lipped about the extent to which they’ve been working together and they features they’ve secured, he did say that the duo have enough material for two projects.

“Right now we have enough material for two projects,” he explained. “We’re definitely going to do an LP. Right now it’s called Saab Stories—Saab as in the automobile company. You can lookout for it in the summertime. Already we’ve got records and features on there that are going to have people blown away at the fact that we’re working with these artists. We have shit on there that they’re not even ready for. We got a lot of surprises.”

UPDATE: Action Bronson has now confirmed, via Twitter, that Saab Stories with Harry Fraud will release in June. The Queens, New York emcee says it’s coming, “no matter what.” The project is believed to be a free album, though that is not confirmed.”

Finishing SAAAB STORIES WIT MY BROTHA @harryfraud RIGHT NOW. THIS WILL BE OUT EARLY JUNE 10000000% no matter what

This year, Harry Fraud has already released two free mixtapes, Horsepower with rhyme-partner Eddie B, and his own High Tide for Scion A/V.

Harry and Eddie are planning, Paper, Piff & Polo for later this year, their retail debut. Action Bronson is also believed to be recording his major label debut for Vice/Warner Bros. Records.

UPDATE #3: The cover art and tracklist for the Action Bronson and Harry Fraud Saab Stories project has been released. 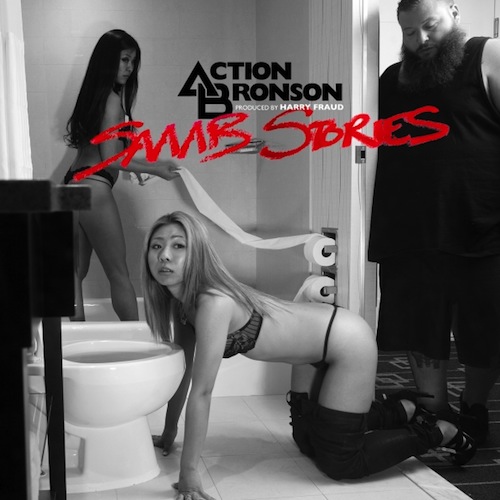