For years, DJ Whoo Kid has been the resident deejay for 50 Cent and his G-Unit camp. During a recent stop at ThisIs50, Whoo Kid talked about his experience with G-Unit and described what it feels like to be fired and smacked by 50 Cent. DJ Whoo Kid also explained why Eminem and his camp wanted him killed.

“The first DJ got stabbed and left town, went to Tennessee or somewhere,” Whoo Kid said, describing how he became a part of G-Unit. “I think it was during that studio situation where the lights got cut off. It was a deejay that got stabbed. When 50’s mixtape came out, they had the tour schedule. They just needed a deejay but at that time, they weren’t interviewing anybody. The trust issue was crazy. So, I was put into G-Unit as the deejay.”

Since then, Whoo Kid has rocked with 50 Cent on stage. However, during that time, 50 also fired Whoo Kid on several occasions.

“It’s up to 48 [times being fired] now,” he said. “I don’t mind getting fired because I guess he’s so used to doing it so much that he gotta keep firing me. You could go on YouTube and see all the countries I got fired from.”

Firing has been one part of the job, but smacks have apparently been another. According to Whoo Kid, he watched as 50 “smacked random people” during a tour, adding that he’s also been smacked.

Still, that tactic didn’t keep him safe from smacks, though he says they were “love smacks.”

“He loves me so it’s like a love smack. But the new niggas was gettin’ wrecked.”

During the interview he also explained why Eminem wanted him killed.

“Along time ago, I leaked an Eminem joint by mistake and they wanted to kill me,” he shared.

More from the interview can be seen below, courtesy of ThisIs50. 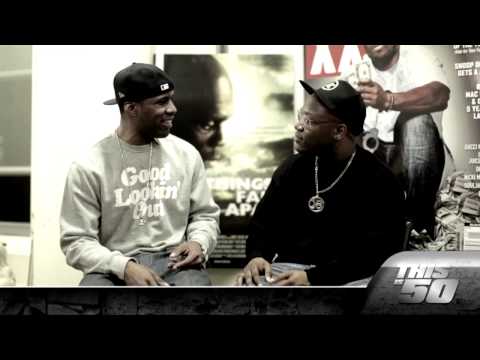