During a recent interview with DJ Absolut’s Take This Serious, J. Cole spoke on his creative control while making his debut, Cole World: The Sideline Story. He also shed light on what Jay-Z did during the process and why he preferred to produce for himself instead of having big names come and help him out.

“I had a hundred percent freedom, the whole album. Yeah, the whole album is my creative control…It was all me,” he said of his hands-on approach. Cole did, however, share that Jay-Z played an important role as well. “[Jay] had a lot of input. Say I would do six, seven song over the course of a few weeks, I would go and play it for him and try to get his feedback on certain songs…I would really go to him like, ‘What you think about this single?’…That how a lot of songs like ‘Blow Up’ was made and ‘Can’t Get Enough‘ because I was trying to impress him.”

Aside from trying to impress Jay-Z, Cole was also trying to impress fans by producing for himself. Acknowledging that he will now try to enlist others, Cole said he refused collabos this go-around to try to solidify his own sound first.

“I’ma  producer myself so it helps me establish my sound. The reason I’m even here right now is because my fans fell in love with my songs that I produced in the first place so it would be oput of character for me to be working on my first album and go see Swizz and go to see Timbaland. When you go to producers it’s because you feel they got something you don’t got, hits basically. So, you end up having an album full of wanna-be hits. But, please believe now that I’ve done this, I would definitely want to go see these guys because they got knowledge that I don’t.” 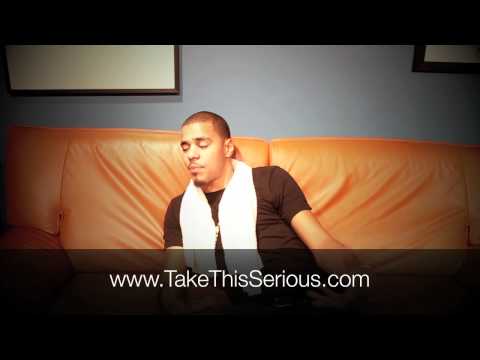