While Dr. Dre has inched his way closer to presenting fans with his long-awaited Detox album, he’s also taken some time out to collaborate with other artists. He recently produced a song with Jay-Z, “Under Pressure,” which is said to be the first single from the album and now he’s reportedly teamed up with Justin Bieber to crank out some tracks.

The 16-year old pop star tweeted today, “Got to be in the studio with the legend himself Dr. Dre. Made a couple beats and he gave me some advice…i was hyped. can u blame me?” The young singer has gained co-signs not only from his mentor Usher, but also from rappers like Game. “He’s another artist that breaks the color lines,” Game told Rap-Up TV. “Everyone loves this kid and he seems like a good kid. More power to him.”

Bieber’s peer Sean Kingston also tweeted that he’d spent some time with Dre and Bieber in the studio.

Aww Man Today Was A Dope Day!!! Got To Meet Dr. Dre… EVEN FREESTYLED ON 1 OF HIS BEATS 🙂 MUST SAY THAT WAS #LEGENDARYless than a minute ago via webSEAN KINGSTON
SeanKingston 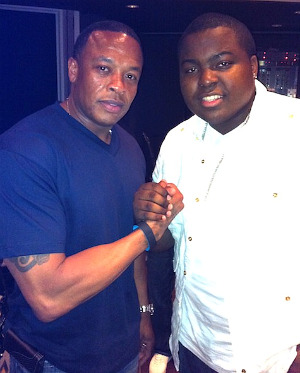 Detox is scheduled for a fall release.