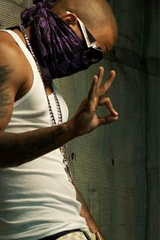 The Game: Man Vs. Machine

The game don’t wait, at least that’s what Warren G once said. However, The Game says that Hip Hop may have to wait on him to hear more after three largely-publicized, arguably classic albums. The third in the trilogy, L.A.X., is the topic at an early afternoon conversation in a Geffen Records corner office in New York City.

Surrounded by his homeboys from Compton and industry mastermind Jimmy “Henchman” Rosemond, The Game discusses Hip Hop in its purest form. Spouting off artists of yesteryear, recounting famous battles and quoting lyrics, The Game might seem like an unlikely lecturer for the university circuit. However, The Game is both a diligent student of Hip Hop and one of its biggest headline drivers. The 27 year-old needs no inquisition to speak about separation from Dr. Dre, a self-proclaimed victory over G-Unit and a sleeping giant perspective on Jay-Z.

Although it seems it’s impossible to get The Game to not be controversial, the first Compton rapper since his mentor to further the city’s legacy seems to be about bigger issues than feuds, bravado and half-stepping rumors of retirement. Whether his promises are to be believed or not, the rapper who has been one of the few platinum superstars to still serve time, demonstrates his love of Hip Hop history, and use his underdog status to do what EPMD, Too Short, Master P and Jay-Z did before him – threaten to hang it up if we don’t wake up. HipHopDX shows you an artist, a dreamer and a victim of circumstance – Game, the man, versus the machine.

HipHopDX: One of my favorite singles of the year is