With truly eye-catching cover art designed by Marvel Canada’s Michael Del Mundo, the artist and the producer spoke to HipHopDX to premier this album’s vivid artwork. 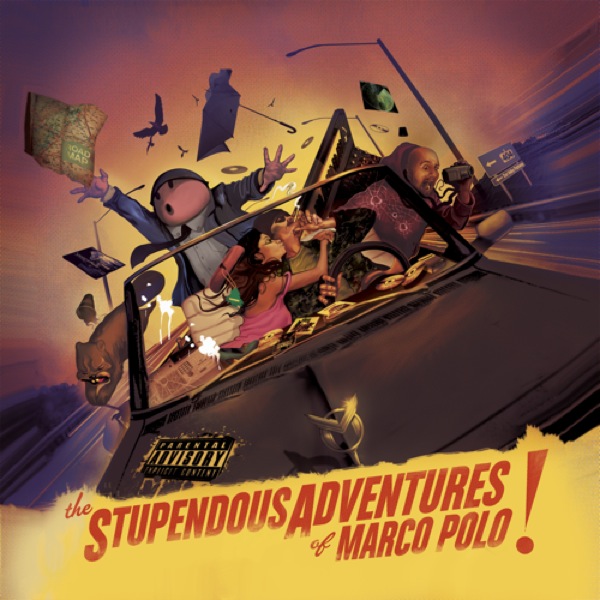 HipHopDX: Marco, your sound is largely synonymous with east coast, traditional Rap. On The Stupendous Adventures of Marco Polo, you remixed Diamond District’s “Who I Be.” Certainly, Oddisee and crew are well-known in the New York Rap community, but seeing with the regional nuances in the group’s sound, what sort of energy did you try to bring to the remix?
Marco Polo: Diamond District‘s In The Ruff was a hardcore album. The beats Oddisee made for that shit is what I personally would like to hear in 2010. So regardless of their regionally/vocal uniquness, I kept the shit hard. It’s also not the first time I’ve worked with Oddisee. Peep Port Authority for my Low Budget All Stars track.

DX: You have another song on this project, “The Veteran” with Grand Daddy I.U. You, N.O.R.E. and Ice-T have been instrumental in reminding Rap fans about I.U., who the history books may miss out on. Tell us about how you produced a producer, and the song, and how it fits within these audio “adventures”?
Marco Polo: This is all started because of Shylow reaching out to [Grand Daddy] I.U. for a verse on his upcoming album. I.U. agreed to do the verse, and I ended up recording it at my spot which led to me playing him beats. Since then, we’ve been mad cool. He sends me drums and breaks all the time; [I] love that guy. We recorded “The Veteran” right after Port Authority was completed or it would have been on that for sure. [I] love the song regardless. DJ Linx [is] on the scratches too!
DX: Fifteen years ago, Evil Dee and Da Beatminerz made two classic albums in Smif-N-Wessun’s Dah Shinin’ and Black Moon’s Enta Da Stage. They were audio auteurs, but those projects have distinct sounds. Working within the Duck Down family today, what kind of parallels can you draw from that and what you did in consecutive years helping brand Torae and Ruste Juxx, while keeping both’s individuality as emcees?
Marco Polo: I don’t really think that deeply about albums. It’s a simple formula for me. I pick the best beats for a certain artists sound or style. Every emcee has a specialty. Torae and [Ruste] Juxx both have that aggression that complements my newer style of production perfectly. Shylow and I always pick what beats should go to what artist as soon as it’s made. A bangin’ beat and a great artist doesn’t automically equal a classic song. [It] has to make sense.

DX: Can you speak about what inspired this? Had you heard the music or only of the title at the time of creation?
Marco Polo: I definitely think the title Shy came up, The Stupendous Adventures of Marco Polo, inspired Mike to go in fun/comedic direction. I have never worked with an artist whose first drafts have literally become the final cover. Mike is two-for-two with that. The eXXecution, now Stupendous.  He fuckin’ gets it, everytime!
Michael Del Mundo: At the time, Marco just flipped me the title [“The Stupendous Adventures of Marco Polo”], and it sounded really wild and crazy – kinda like some [Fear and Loathing in Las Vegas] theme. So that’s what first came to mind. When we first talked about the artwork for the album, Marco was throwing ideas to do up a collage of pics of his travels. The plan was really to do up a quick collage design piece, but after The eXXecution artwork was done up, Marco basically gave the go-ahead to do my own thing on it. So I was like, I gotta do something like Fear and Loathing-meets-True Romance. Just like The eXXecution artwork, a lot of the inspiration is move-related.

DX: From epic Rap covers from Ice-T, Smif-N-Wessun, A Tribe Called Quest, to some really uninteresting modern Rap art and photography, how imparative do you think it is to keeping the commerce alive and the culture fun?

Michael Del Mundo: Super important! Like anything, the cover is what draws you in to the product. It’s all about the law of attraction.

Marco Polo: I think having a great cover is extremely important. It solidifies your hard work on an album to have a visual representation. To this day, catchy covers is what leads me to purchase certain albums on vinyl with no prior info of an artist. Music collectors love great artwork. I spend too much time on these albums to slack on the cover.

DX: So each image means something?
Michael Del Mundo: Being that I’m also from the Toronto, the beaver is definitely sentimental. Also being able to draw the Duck Down dude is quite the pleasure. I’ve been a fan of Duck Down since Enta the Stage so I had to throw Mr. Duck Down in there.
Marco Polo: The cover has many specific images that mean something to me. We got the crazy beaver, which is a Canadian reference. I have my brother from another, Shylow, in the back taking pictures looking like a muthafuckin’ jolly-ass Santa Claus just happy to be along for the ride. Of course, the Duck Down [mascot] dude! All my albums on the dash and flying in the air, DVP sign on the highway which is Toronto all day…

The shit is perfect.

DX: Michael – what’s your relationship to Marvel comics in Canada? Have you been responsible for any recent artwork there?
Micheal Del Mundo: Yeah I’ve been working with Marvel for a bit. I do cover work for them. Recently, I’ve worked on Spiderman, Iron Man, S.W.O.R.D., and Marvel Zombies. It’s an awesome gig!

The tracklisting for The Stupendous Adventures of Marco Polo is as follows: