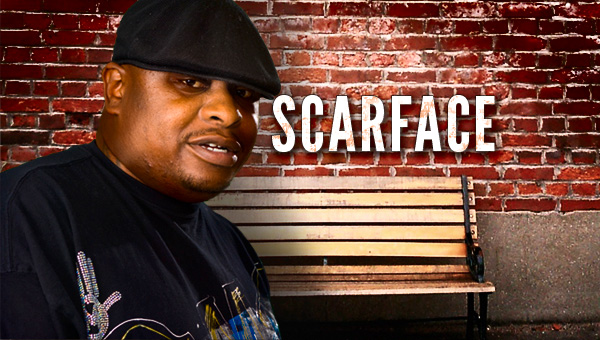 In anticipation of the May 4th release of Dopeman Music, pioneering southern emcee Scarface spoke to HipHopDX late Tuesday (April 20th) about his forthcoming mixtape prelude to his next full-length, The Habit (and why ‘Face considers The Habit his proper follow-up to his classic 2002 offering, The Fix).

As an appetizer to next week’s posting of that detailed discussion with DX, we present an excerpt from our Q&A with ‘Face that won’t make it to the final edit of his feature interview due to space issues. Equally as eye-popping as the rest of his conversation on Tuesday, in the excerpt below Scarface explains why he is remaking some of KRS-One’s seminal work as part of Boogie Down Productions, 1987’s Criminal Minded. The day after the passing of his collaborator for 1998’s “Betrayal,” ‘Face also bid a fond farewell to Guru (and revealed how the tag team of DJ Premier and Guru was clearly destined to be, as the emcee/deejay tandem of Premo and Scarface nearly happened instead).

HipHopDX: I need to ask you about something a little birdie told me recently: is it true that Scarface is remaking Boogie Down Production’s classic Criminal Minded album?
Scarface: Not the whole album, but I’m making some [of it]…

DX: So [you’re saying] just a few songs [from the album]…?
Scarface: I’m thinking so. Um…I haven’t really came to the conclusion yet of what I’m gonna do with it, but I know for a fact that I’m remaking “9mm Goes Bang,” along with “Poetry” and shit like that. I just feel like – And it’s not for a personal gain, it’s a respect thing. I’m [paying respect by remaking] [KRS-One‘s] whole fucking shit. I feel like he deserves that compliment. Like muthafuckas forget where it came from, man. I remember growing up in junior high school, and like my first couple years that I spent in high school, I fucking had that rhyme scheme. I wrote my rhymes like that [mumbles cadence from “Poetry”]. I was that!

DX: And I understand these songs are gonna be for like a soundtrack for a Boogie Down Productions biopic?
Scarface: Possibly. Now that part we haven’t worked out. I’m selfish now – a muthafucka just can’t take it. [Laughs] I mean, I’ma do the muthafuckas and he can have whatever – I don’t care what he use it for, man. But I’m gonna do that muthafucka ‘cause to me, man, like Kris look at me – Every time Kris see me he go, “Ohhhhhh” like he just seen a fuckin’ ghost, right.

DX: [Laughs].
Scarface: For real. “Ohhhhhh.” If you look on YouTube [there’s] a classic fuckin’ “Ohhhhhh” on YouTube from Kris, man. He’s like, “Ohhhhhh shit” like he just seen a monster or something. And that’s how I feel when I see him though like, “Man, you fuckin’ Kris Parker dude, get the fuck outta here.” Like, he my all-time favorite, dude – one of my all-time favorites.

DX: So is that how this idea came about, y’all just ran into each other and started choppin’ it up or…?
Scarface: [Inaudible] and I was playing – I called him and asked him would it be cool if I used “9mm Goes Bang,” and he said, “Cool.” Then he said, “I’m gonna even do the hook.” And I was like, “Fuck it, c’mon wit’ it.” Then he started going on about doing some other stuff with the [Criminal Minded album] as well. But, mainly we focused and talked about doing “9mm Goes Bang.”

DX: Okay your first comment cut out on me there, you’re saying that you called him asking to remake the song or just sample it?
Scarface: Remake it. I wanted to remake it in its entirety…

DX: Are you planning on like a line-for-line remake? Are you spittin’ all of Kris’ original lyrics?
Scarface: You God damn right. I mean, how do you fuck up a classic?

DX: [Laughs] People don’t know Kris as a gangsta rapper. [Laughs].
Scarface: That muthafuckin’ Kris was a muthafucka! “The money and the sensemi’ was lyin all around…put their pistols down to take a cut / Me jumped out the kitchen, went ‘buck! buck! buck!’”

DX: So when you gonna get in the booth and bang these [song remakes] out?
Scarface: Man, I’m currently…I just signed an independent distribution deal through a major [label].

DX: Wow.
Scarface: I know, right? Like, I’m the new indie Rap label that the world’s been looking for.

DX: Who’s the major [distributing your label]?
Scarface: Hey…the check ain’t cleared yet. Once the check clears, I’ll make the announcement, but until the check clear it’s not etched in stone, you feel me? But, the signatures have been signed off on.

DX: Okay, I’m just trying to get a feel for how major we’re talking.
Scarface: It’s different than Deep, yeah, without question. I’m just doing a…I just did a mixtape with Deep, [Dopeman Music]. I wouldn’t say that – Like, Deep is gonna always be my outlet for mixtapes…

DX: And other Facemob [Music] material?
Scarface: Yeah all the Facemob shit.

DX: One more question on the Criminal Minded front: I don’t know if this would even be something y’all’d wanna do, but are you gonna get back with [album producer] Ced Gee of Ultramagnetic to do the beats again or you got ideas for other producers you wanna [have] remake the tracks?
Scarface: Wait a minute now…you said some shit I ain’t never heard [before].

DX: Ced Gee, Ultramagnetic MC’s.
Scarface: He did that shit?!

DX: Well it’s on Wikipedia actually, if you go and type in the Criminal Minded album. [Laughs] Kris and them, I think it was all collaborative [between] Kris, Scott La Rock and Ced Gee.
Scarface: Wow, that’s pretty sick. Now that, I didn’t know.

DX: So I mean, you gonna like try to go back to that sound, or you wanna bring in like your own producers, or do shit yourself, or…?
Scarface: I mean, shit, I’m gonna just ride to where it goes.

DX: Kris.
Scarface: Oh he did?

DX: Yeah, it was just set to like a modern Premo beat.
Scarface: Nice.

DX: Now on a somewhat related note, something I need to ask you about too… You were on “Betrayal” from the classic Moment Of Truth album so I wanna get your thoughts on Guru’s passing.

Scarface: I think everybody has a check-in, and everybody has a check-out date. And what you do in between the time you check-in and the time you check-out is totally left up to you. [Guru] chose to be an innovator in music. He chose to be something special in music, in Hip Hop. Like, he chose to be the voice that we’ll never forget. As far as him on a personal level, I only knew him through hangin’ out – and I did the “Betrayal” record with him. But, as far as his contribution while he was alive to the craft, [it’s] unmatched. I wish him a safe journey into his next life, and I wish his family the absolute best… I’m saddened to lose a friend, but at the same time I’m thankful that God kept his word. Because, if you don’t know anything else about life, and life’s promise, you know that at the end of the day you have to say goodbye. No one is gonna live forever, and to be able to accept and respect the order is a sign of a good person. We have to respect the order. Is there any person in this world that you know of that’s lived forever, besides like Larry King?

DX: [Laughs.] No, no, no.
Scarface: You know is there anybody that’s lived longer than George Burns? I mean he’s dead now, right? [The star of Oh God] is dead.

DX: You talking about Solar?
Scarface: Solar, yeah. Nobody could do nothing about his time. I’m just thankful for the time that we had him. I’m thankful for that. I’m thankful I got a chance to meet him. A memorable Guru moment: us in a club in New York City, and him drunk… If he was [43 when he passed], I think he may have been 30-something when I met him, and I was still in my twenties or whatever. But when he got tangled, got fucked up, he was 12! [Laughs] [When] he got fucked up he was a kid! I mean he really had fun. When I saw him [after that] in New York I always saw him on some Brooklyn shit. Wasn’t he from Brooklyn?

DX: He was from Boston actually. Boston, Mass.
Scarface: No shit?

DX: And there’s a Texas connection to Gang Starr ‘cause of Premo, you know, [Preme] being a Texan.
Scarface: Yeah Premo from [near Houston in Prairie View, Texas]. Premo’s people live in P.V. Premo used to work at the record store a looong time ago.

DX: Hey, well I appreciate those thoughts, man. I know it’s, like you said, you didn’t know [Guru] that well, but I knew that you had [something to share]. Because you guys worked together I knew that you had something to contribute…
Scarface: Yeah, I thought he was a brilliant artist, and I loved when he was fucked up…’cause he really, really showed his ass.

DX: [Laughs] I don’t know if they can put that on the tombstone but… [Laughs.]
Scarface: Well, I’m telling you when that guy was drunk he was the class clown. Rest in peace.