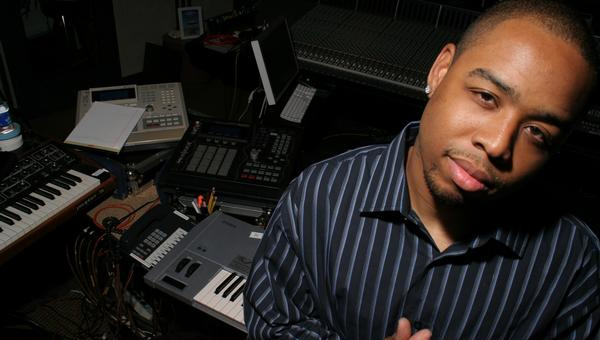 It’s a spectacular revelation to stumble across a producer who’s just as happy to make the music, as the fans are happy to receive it. Terrace Martin is the guy behind the boards working the late shift to bring creative melodies to the forefront. “I want to be different and try to figure out a way to touch people, that’s pretty much it. I just try and stay hella creative and stay super different to where I can be satisfied and the public can be also. That’s mainly what goes through my mind when I go to the studio. All I need is a good Pro Tool’s engineer, a veggie burger, and some water and I’m good. I don’t need no girls, homies, no drink, and no weed in there with me. I just need a studio to create and get this music out of there. I’m kind of old fashioned when it comes to recording like ‘If you’re not on the song, than why are you in the studio?'”

Having digitally released 808’s & Sax Breaks through his Stampede Management late last year, Martin also told DX about his reasons for leaving Warner Brothers Records, where many believed he had found a proper home in recent years. “No, I’m not with Warner anymore. It was very much so based on creative differences. They had changed the whole staff up at Warner. I kept getting passed around and passed around until the point where me and my team felt like we would be better off out of the deal. But it’s no hard feelings; I love everybody over there. For now I’m going to keep it independent because I love having my independence. I still work with other labels and I still have a song deal at Warner, but based on the music that I’m doing I’d rather just keep it independent and release it online.”  That afforementioned EP is a Jazz-inspired instrumental cover collection of Kanye West’s 2008 melancholy album.

With a wide Jazz background, Martin seems to find the niche of giving Hip Hop a second chance to be special. He treats music as an investment and with nothing ventured nothing can be gained. He’s not just pressing the record button, but as a musician, he plays the alto saxophone like most of us brush our teeth. However, the impetus for mastering the instrumental may have been carnal. “I always use to see the saxophone around as a kid because my uncle played it. When I was like 12 I went to spend the summer with my father in Harlem. One night he was playing at this Jazz club and this beautiful woman came up to him and asked if I was his son to which he replied yes. She turned to me and said what instrument do you play; do you play drums like your father? I told her no that I didn’t play any instruments and she replied well if you ever start you should play the saxophone. I asked her why and she told me because it you play the sax you will be able to make love to your woman just by playing for her.”

While many fans associate Martin with Snoop Dogg and his Doggystyle Records affiliates, the prodigy has also worked with Diddy and Stevie Wonder. Drawing influence from many places, Terrace pointed to Quincy Jones in particular – someone who he has been able to work alongside. “Quincy is definitely my favorite producer of all time. He’s worked with everybody from Ray Charles to Dizzy Gillespie. Working with him was a dream come true. When you work with Quincy, he lets you be you a lot of artist that I’ve worked with try and make you be them… It was amazing and the best experience of my life.”

Fresh on the heels of 808’s & Jazz Breaks, Terrace Martin is back at it with one-half of Tha Dogg Pound for a full collaborative album. “I’m actually producing Streetlight, which is Kurupt’s new album. He’s back and brand new again so we’re all excited about it. I executive produced the whole album it will come out on April, 20, which is the national smoke day. So all of the smokers look for that.”