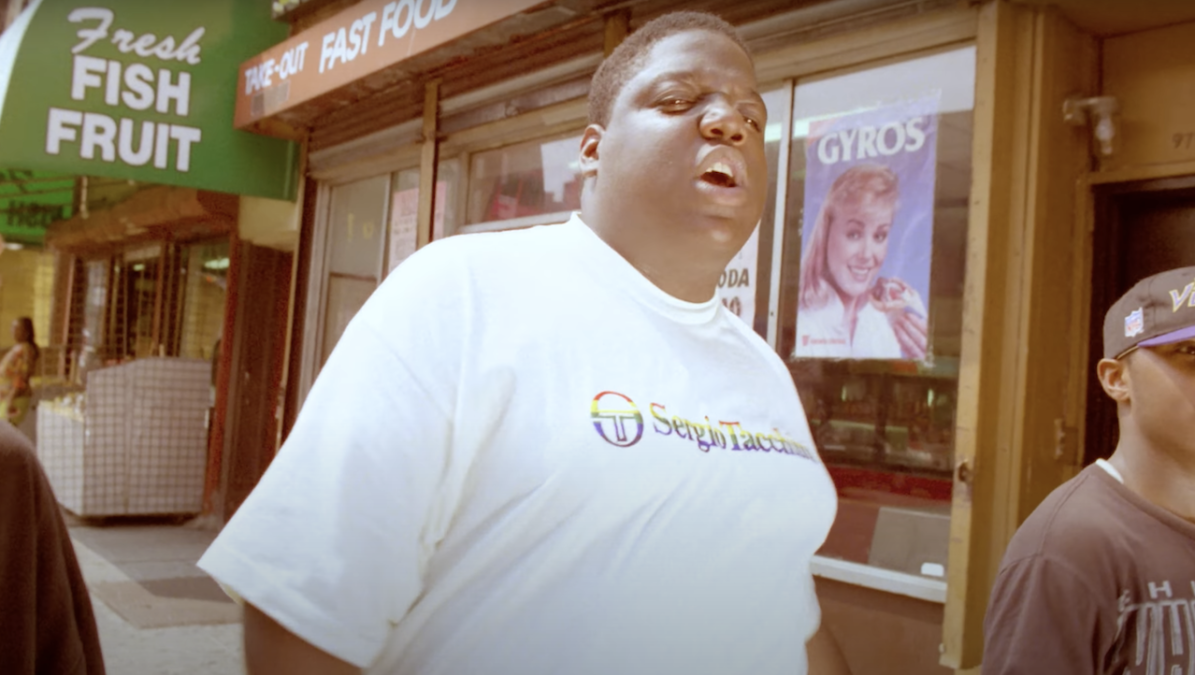 Biggie Smalls has been immortalized on the cover of a new limited edition Deadpool variant comic in belated celebration of what would have been his 50th birthday.

Marvel Comics revealed the cover on Wednesday (November 2), the same day the Deadpool (2002) #1 went on sale. The artistic tribute was created by artist Ken Lashley in partnership with hustl., a sports and entertainment agency which specializes in developing one-of-a-kind, limited edition collectibles.

B.I.G.’s first appearance on a Marvel cover finds the fallen Brooklyn legend sitting on a throne in Times Square, with Deadpool looking back at him over his shoulder.

is Biggie stealing my thunder?

The intricate artwork also incorporates a carpet reminiscent of the Coogi sweater pattern, a boombox, and photos of Biggie and Deadpool replicated on the Times Square screens.

“Biggie and Hip Hop turned 50 this year, so we at hustl. were absolutely thrilled to work with his team and Marvel to create this variant as our way of paying tribute to one of the greatest and influential hip hop icons of all time,” hustl. COO Keri Harris shared in a statement. “Next month, we will follow this up with another all-time great, which we cannot wait to share with pop culture fans.”

According to Marvel.com, while Biggie covers the new Deadpool variant, he is not included in the plot line.

The story written by Alyssa Wong and Martin Coccolo follows Wade Wilson’s antihero alter ego attempting to infiltrate an elite group of assassins known at the Atelier. In order to be let into the fold, Deadpool is tasked with killing one of the Marvel Universe’s most famous villains within 48 hours.

Deadpool (2002) #1 is available at online at The Haul while supplies last.

This is not the first time Marvel has featured Hip Hop artists on variant covers alongside some of their biggest characters. Birdman previously appeared on a limited edition cover of ‘The Amazing Spider-Man’ issue No. 11, while Eminem covered  the ‘Mighty Avengers #3’ variant cover the previous year.

In 2015, Marvel launched a series of images that found a variety of characters recreating iconic Hip Hop album covers. Revisiting the concept the following year, the collection grew to include over 80 reimagined covers including a Deadpool rendition of Wale’s Attention Deficit; two Nas tributes, with a Miles Morales remake of Illmatic and a Spiderman version of Life Is Good; and Riri Williams taking on Missy Elliott’s Under Construction.

Even Biggie was included in the tribute, which found Ant-Man recreating the Ready To Die cover.

Marvel’s then editor-in-chief Axel Alonso said the collaboration was inspired by the common narrative between Hip Hop and comics, Screen Rant reported.

“It’s about two creative art forms shouting out to each other,” Alonso said. “Hip hop is the backbeat for any number of people who are writing, drawing, and editing these comic books.”