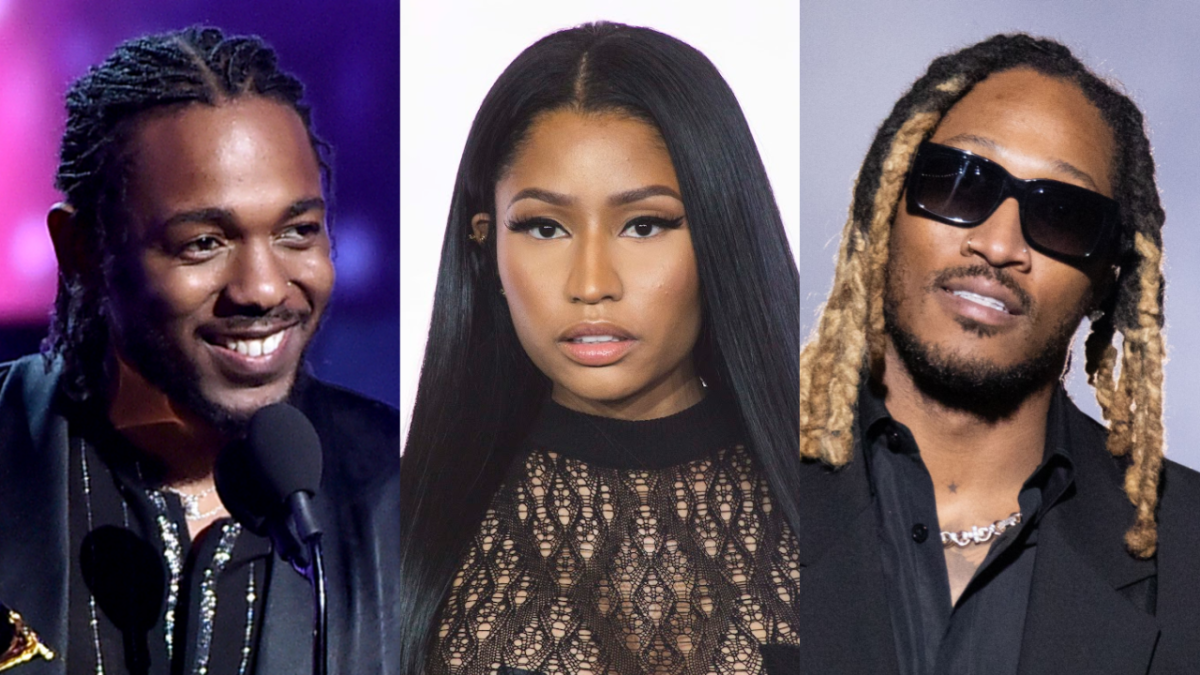 Kendrick Lamar, Nicki Minaj and Future were among the Hip Hop stars who added to their respective trophy collections at the 2022 American Music Awards.

The annual awards show took place at the Microsoft Theater in Los Angeles, California on Sunday night (November 20), where some of the past year’s top achievements in music were recognized, as voted for by fans.

Future’s I Never Liked You, Gunna’s DS4Ever, Lil Durk’s 7220 and Polo G’s Hall of Fame 2.0 were also in contention for the latter.

Meanwhile, Nicki Minaj was crowned Favorite Female Hip Hop Artist, fending off competition from Cardi B, GloRilla, Latto and Megan Thee Stallion, while Future’s “Wait For U” collaboration with Drake and Tems came out on top in the Favorite Hip Hop Song category.

Elsewhere, Taylor Swift walked away as this year’s most decorated artist after cleaning up in six categories, including Artist of the Year, Favorite Female Pop Album (Red [Taylor’s Version]) and Favorite Music Video (“All Too Well: The Short Film”).

The 2022 AMAs were hosted by Wayne Brady, while performances came from an all-star cast including GloRilla, Lil Baby, J.I.D, Ari Lennox, Stevie Wonder and more.

GloRilla brought out Cardi B as a surprise guest for a fiery rendition of their “Tomorrow 2” collaboration, while Lil Baby graced the stage to deliver a medley of “In a Minute” and “California Breeze,” from his latest album It’s Only Me.

Atlanta rhymer J.I.D joined Imagine Dragons for a performance of their hit collaboration “Enemy,” before fellow Dreamville representative Ari Lennox sang “We Are the World” alongside Stevie Wonder, Smokey Robinson and others as part of a tribute to Lionel Richie, the recipient of this year’s Icon Award.

Kendrick Lamar and Future could both grow their trophy collections even further at the 2023 Grammy Awards next February, where they’re up for multiple awards each.

K. Dot has eight nominations — second most behind Beyoncé’s nine — including in the coveted Album of the Year, Record of the Year and Song of the Year categories for Mr. Morale & The Big Steppers and “The Heart Part 5,” respectively.

Hendrix has six nods across the rap categories thanks to I Never Liked You and “Wait For U,” as well as his appearances on Gunna’s “Pushin P” and DJ Khaled’s “Beautiful.”

Despite scoring a hit single with “Super Freaky Girl” and kicking up a fuss before the nominees were announced, Nicki Minaj has zero nominations at the 2023 Grammy Awards.