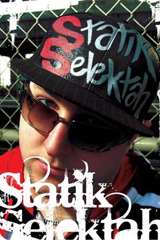 Statik Selektah is very selective. The Boston-bred deejay-turned-producer has upheld the forgotten theory that “if it sucks, don’t play it” along with “if it’s dope, it doesn’t matter.” Besides touring with A Tribe Called Quest and G-Unit, the radio personality has flooded the streets with top-shelf mixtapes that have broken records in the mainstream and underground alike.

Now with debut album Spell My Name Right, Statik takes his diverse tastes and blends them together for 21 tracks of unique collaborations, high and low profile emcees and hard-knocking beats from the mixtape mastermind. With 12,000 units shipping, Statik Selektah is putting up impressive numbers as the album drops. He tells HipHopDX about his Hip Hop history research, transitioning into production and the methodology to his tape-rewinding collaborations.

HipHopDX: What let you know that now was the time to test the waters as far as an album goes?

Statik Selektah: Really, the mixtape game is messed up. Whenever I do mixtapes, I try to make them like albums anyway. I think I