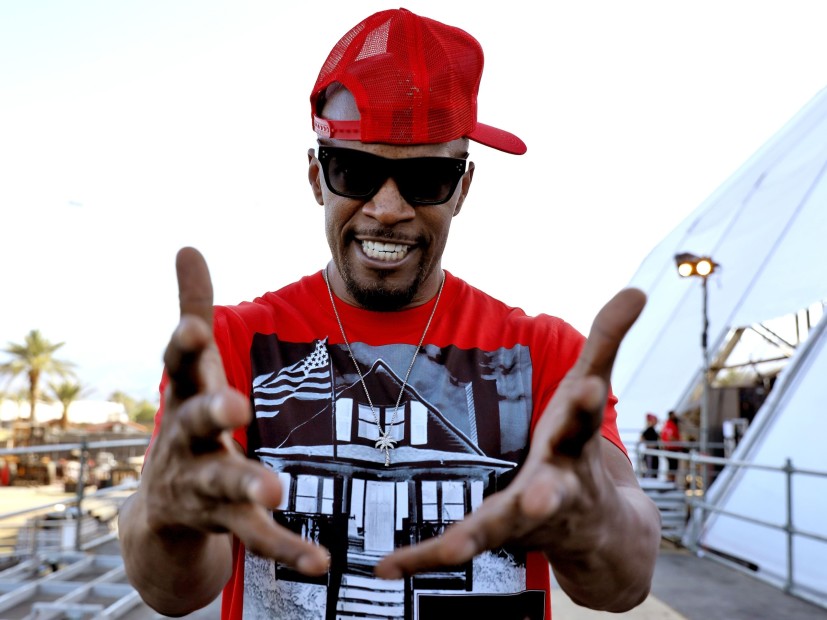 For Jamie Foxx, Hosting The 2018 BET Awards Was His Calling

Which is why hosting the 2018 BET Awards made perfect sense, especially to him.

During the seemingly lone day that escaped Los Angeles’ very real June Gloom malarky, the 50-year-old Foxx opened up to a select handful of journalists to discuss his decision to be center stage for Sunday night’s (June 24) grand gala of Black Excellence. (And by select handful, it’s just Devin and Cameron Lazerine, owners of Rap-Up, and me.)

“It’s sort of like doing stand up. There’s always going to be people in the audience that you know, because I’ve known these guys, I know almost everybody that’s in the audience,” Foxx admits, downplaying any nerves involved with such a highly visible enlistment.

“So, there may be a moment of just, DJ Khaled’s been working out, show us the … There’s things that you can just jump to. But I think in this one, it’s pretty straightforward. I’m not here to host, I’m here to celebrate, and the reason that I wanted to get in on this is because I thought this was the greatest year for it.”

Come with us, 'cause none of that nonsense is happening here. Let the 2018 #BETAwards hosted by @iamJamieFoxx revitalize your spirit TOMORROW at 8/7c.

And what a (calendar) year it’s been since 2017’s event. Foxx cites blockbuster films like Black Panther, Get Out and Jumanji to the rise of superstars like Cardi B as a prime reason to celebrate more than ever (“it’s toast as opposed to roast,” he says of his intended jokes) and his recruitment is 100 percent his doing.

“I called them,” he admits when asked if he needing a ton of coaxing to take the gig. “I called them because I was like, ‘Oh, this is time.’ And plus, I want to get some stuff off … going back to doing stand-up comedy. So, it was like I just wanna … as a comic who’s been doing it for a long time, you look for a moment to get your, ‘Oh, let me get in here and throw this and see what this will be like and let people see with the mic.’ So for me, it’s refreshing. It’s energizing. So, I called them and I was like, ‘Yo, I know y’all looking at everybody to host but I wanna be a part of that.'”

Foxx continues, “When you have certain shows where there’s really not a lot of things it makes it hard on the host. But I mean, how many great jokes and great acknowledgements are there in just Black Panther? The fact that people think that Wakanda is a real place.

“Of all the hosting that I’ve done in the past, I mean 30 years of hosting, some are different. Some you have to go away and really come up with a monologue. But with this, it’s musical. So, your music is going speak you know for … And, it’s basically, when I went into BET, I already had the three-minute monologue.

From Grammy Awards to a huge Oscar win for 2004’s biopic Ray, Foxx’s still-thriving career is already decorated enough for him to claim legend status for the rest of his days. Yet, he still vividly remembers when his name didn’t hold much weight in Tinseltown and he had to hustle just like your favorite Instagram comedian.

“L.A. will remind you [of not being famous.],” he recalls. “L.A. will remind you that you famous and then you ain’t as hot as you think you are. L.A. got all the shit you need to give you what you … I remember being in line at the club, not famous. That was the part that was like, ‘Damn! Come on, we trying to get in, it’s 1:58! Bitch close at 2:00!’ I can’t tell you how many times I get right to the, ‘It’s over man.’  Damn! Them muthafuckas was getting it too! Denzel Washington, Magic Johnson, all them muthafuckas.”

And then there was a dose of reality that even stand-up wasn’t a given even with a bit of celebrity to boot.

“I remember I got on In Living Color and thought I was the shit,” he says. “I start telling my jokes differently, telling rich jokes. Got that Range Rover, anybody else? Niggas is like, ‘’What?’

“I remember reminding yourself not to get too lax. I walked out of the club and I heard the whole club going crazy. I open the door., ‘Who the fuck is that?’ I just got upstaged. Who could that possibly be?” It was a young Chris Tucker who was young. It looked like … He was doing jokes like this … He pulled that comedy sword out like this and went and all the head went up and caught them in the bag. I was like, ‘God, I can’t get back to that.'”

?@iamjamiefoxx: Tomorrow night it is on!!!! This is the biggest year for us in cinema music and philanthropy !!! They say we could do international box office!!! We killed it #blackpanther #girlstrip #getout #jumangi Let’s toast to us and our accomplishments!!! Because I’m not here to host I’m here to celebrate !!!!! @michaelbjordan ?????@betawards Sunday at 8. #backonmyfunnyshit #bethost #blackexcellence #blackexcellencetelevised #betawards

It was then Foxx took it upon himself to perform jokes for U.S. military troops in Okinawa and vowed never to let his head swell to the point he couldn’t fit in the door.

With upcoming and inevitable winning projects like Todd McFarlane’s Spawn, his own slapstick comedy All-Star Weekend, potentially a new album (“I still gotta get that classic album,” he admits) and of course, the 2018 BET Awards, fans will look forward to seeing Foxx continue to do what he does best — flourish.