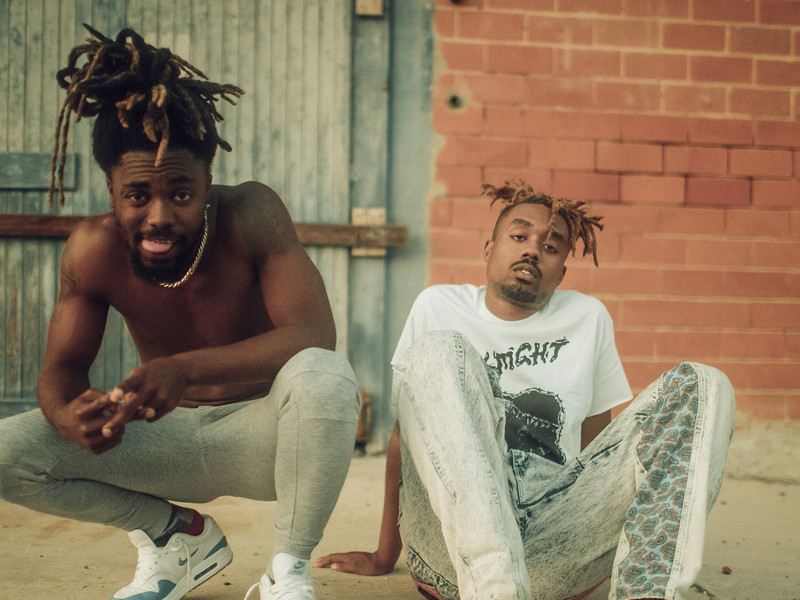 EarthGang Explain How They Got Signed By J. Cole, "Rags" EP & Upcoming Projects

Last week, HipHopDX presented the first part of our interview with Dreamville’s new artists EarthGang. After detailing their career journey in Part 1, Doctur Dot and Johnny Venus move the conversation to the present to talk about the big change in their lives.

EarthGang recount how they linked up with J. Cole and share insight about their recently released Rags EP. The duo also gives fans a preview of what’s to come, which includes a few more EPs and their first album for Dreamville.

HipHopDX: Do y’all remember when J. Cole first got notice of the Spillage Village crew?

Johnny Venus: Yeah. I remember the first time [our manager] Barry even mentioned Dreamville. We ain’t believe him. Like Barry, this crazy. That nigga be saying some crazy shit but that shit be happening, yo!

So I remember the first time he said something about that shit. I was like, “Yeah, ok. Whatever bro.” We’re going to go on this Ab-Soul tour, put all our savings into this and see how that comes about. But on tour, we met [Cole] up in New York. It was a crazy show. We seen him right afterwards, and he was like “Yo, y’all niggas killed that shit.” And it was our first time really communicating with him. He was chilling upstairs and then after that, we just kept in touch.

People think shit happens overnight. Nah bro, we put in work. We put in thought process and dedication into this. So we got a chance to really work with him, smoke with him, laugh with him, kick it with him; just talk about regular life shit and then the process continued to form organically, and we built it up to something. That’s how we like to do shit, man. It’s always gotta be organic and the feeling about it, and it’s gradually gotta grow.

DX: So the world finds out y’all signed  recently, but J.I.D signed earlier this year and made his debut. Was this something in the pipeline or did this come about very recently?

Doctur Dot: Everything’s all planned, man. Everything’s very strategized. Like he said, we’ve been fucking with Cole for a while. He came to our show and he reached out to us. He reached out to EarthGang back in 2013, 2014. Now before that shit, we was still at the crib. We was still working jobs. And I remember that nigga Barry called and he was like, “Yeah, Cole fucking with y’all. He’s trying to start some shit called Dreamville.” And [I’m] like, “What the fuck is a Dreamville, nigga?”

Who was popping in 2014? I can’t imagine what we were thinking at that time. And Dreamville wasn’t with Interscope yet. There was a whole bunch of things, but we was like, “What the fuck is Dreamville?” We’d never heard of it. And ironically, we met Bas shortly after that.

Venus: Right before we went on the Ab-Soul tour.

Dot: Yeah, yeah. Shortly after that we was meeting Bas and thinking, “Okay, this is the Dreamville shit the nigga was talking about.” We still wasn’t sold on that shit, and then the relationship made more sense.

Venus: I remember when Cole came down to our second crib in Atlanta. I think he had a show, but he came to the crib and the whole squad low-key came in there. That’s kind of where that clip came from when we signed.

We came to the crib right after the show, and he was like, “Yo, I’m ’bout to pull up.” And we like “Oh shit, this nigga’s really here.” We playing music for him, talking, chatting, whatever. That was really the first sit-down with him before we even went up to The Sheltuh. That was really the first moment where we got to sit down with him, play records for him and build up that rapport. That shit was amazing.

DX: So when you when do you start Rags?

So that’s when we started to pull these pieces together, assemble the collection, assemble the X-Men, assemble the puzzle. It’s like “Yeah, let’s do this, let’s put these together.” That’s why it’s kind of like amazing when people be like… The growth process and how some of these songs were recorded last year, but we went back in and tied them all together and stuff. It’s still amazing to us and that’s why I love life. I love having these records roll out. You never know what people gonna vibe to. You never know what people gonna love until you put that shit out.

Dot: What’s crazy about it, it’s so funny. Like niggas always saying, “Whatcha did, whatcha doing?” I know people want to talk about what they heard, but to us, to the artist, we’re always thinking the last thing we actually did. We like, “Yo, that shit I was just doing, wait till y’all hear that!” That’s where my head be. When people tell me about shit on Rags, and I be like, “Yeah, that’s great. I appreciate it.” But by the time y’all hear that shit, I’m down so many other records. When we decide the ones from Rags we’re going to perform, I be having to go back and play them.

DX: Just listening to Rags, it does seem like a very good intro for anybody that hasn’t heard of y’all. It’s kind of like an appetizer to say, “This is what we do, this is the way we use live instrumentation.” It’s kind of soulful too and there are lots of great lyrics. Obviously, you got J.I.D on there, but talk to me about the Mick Jenkins collab.

Venus: He pulled up on our crib, man. His momma dropped him off. He was down there visiting her. She pulled up — he was in a minivan — and dropped my man’s off. He was like, “Yo, I’m about to come.” So we kicked it and my man Hollywood JB. Shout out to Hollywood JB, Spillage Village. Man, what happened: he produced a lot, so he like just kind of finished a track and just pulled that shit up and Mick wrote his verse right there. We all was writing right there. We came up with the hook and everything right there.

Dot: That was an organic-ass song. He came through the crib. His momma was like, “Yo, he safe over here?” And we like, “Yeah.” [laughs] And then she pulled off and he came in. Mind you, my man’s like 6’5. Big ol’ nigga, he could probably beat up most people if he tried.

So it’s cool. We kicking it, we smoking and we just kind of had the beat on loop while we was talking anyway. We just had the shit playing ‘cause JB was always making something. He’s always doing something, so we just listened to it while we talking and shit and just catching up. And then next thing you know, we all coming up with different melodies and shit and we putting verses down. It was a super organic song. We went back over it and had this dude Cleva Keys play the key solo on there.

Dot: My attention span is too little to be boring or redundant, man. I don’t care how hype it is or if it’s the coolest nigga on earth. If it’s boring, if it’s redundant, if I feel like I get it too quick, then I’m over it. We always try to have different … we got so many versions of our shit. We always have different arrangements and shit and different ways to try it, so the live instruments add to the fact that it’s … it adds to the surprise.

DX: So, going forward, you were speaking about more projects on the way. You don’t have to spoil anything, but what’s in the pipeline.

Venus: It’s all good, fans know it. Robots is coming soon. We got Royalty after that. These are two EPs we are dropping. Then we got our album, Mirror Land, coming right after it. We keeping ‘em coming. We know we’ve been off the grid and recording while we’ve been in cave mode — Tom Hanks in Castaway mode — for about two years.

So, we want to present what we’ve been working on to the fans. We want them to take this and be a part of this journey with us, step by step. We’re picking up more fans every train stop. Robots is coming in October. It’s going to be ridiculous. We already got some crazy-ass videos for that shit. Can’t wait for Royalty to drop. Mirror Land’s going to be crazy, man. It’s going to blow your fucking mind, yo.

Venus: It’s going to be wild!

Dot: Essentially, these EPs are like a deconstructed album. What I’m interested to see is how many people play ’em all back to back and play the story through and see … Those kind of conversations are my favorite. Those are the people that pick out the details and interpret shit their own way. It’s my favorite part of doing this shit ‘cause I don’t never tell someone they’re wrong. I think that’s dope. I ain’t think about it that way. That’s my favorite part.

Venus: Speaking of details, shout out to my man DC Young Fly for being on the interludes and all that shit. Shoutout to my man Chris though for making these interludes. We been working. We definitely want to keep that … We piecing them together. We keeping the same ideas and content. Same stuff and we just add a little more here, watch and do a little experiment. We mad scientists, yo.