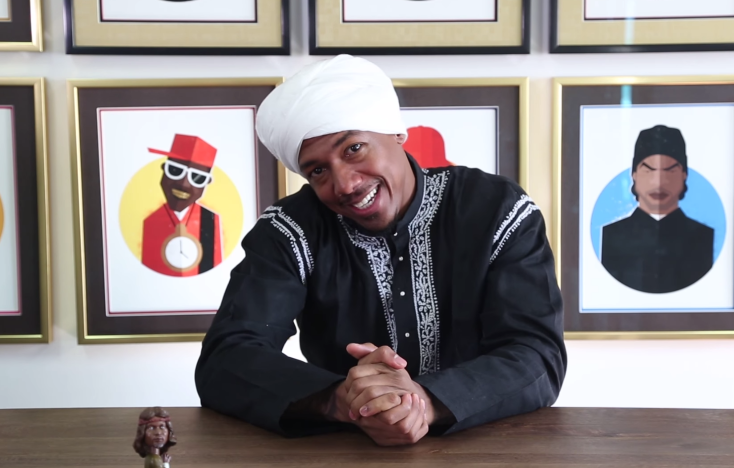 Nick Cannon says he’s investing in time travel. A fitting joke for the 35-year-old Jack of all trades, master of many. Especially since he’s constantly involving himself in endeavors that simply pad his bank account. Within the last year, he’s been named “Chief Creative Officer” for Radioshack, launched a new line of NCredible headphones, spearheaded yet of another season of MTV’s Wild ‘N Out, acted a fool on BET’s Real Husbands of Hollywood and hosted a little show on NBC known as America’s Got Talent.

For Cannon, unleashing time travel onto the world would not only prove to be yet another lucrative opportunity, it would explain how he’s able to be in so many places at once. In between taking classes at Howard University (yes, he’s now a student with actual homework), the rapper/actor made his way to HipHopDX’s headquarters and offered up a couple of chapters from his hustler’s playbook.

On Simply Being A Celebrity

Aw man, I don’t care about that stuff. You’ll never hear me complain. The popularity of being celebrities is what we asked for. I don’t think there’s ever been a time in my life where I’ve ever turned down a picture or an autograph because I’m just a people person. I love people; I love to interact with individuals, so even if I’m not in the greatest mood, I understand that the people and the fans are what make this all possible.

It can get in the way when you’re trying to find a connection with someone but because I’m so busy trying to work on myself right now, I have several friends and associates and people that I’m interested in; people that I may not be so interested in but at the end of the day, I’m not going to stop living my life because you know someone’s story says this or that. And the people who know me and love me understand what it is.

I haven’t made any commitments to anyone and I also don’t feel like that I’m in a space to where I would have to explain myself unless we chose to have that conversation because I don’t question other people about what they’re doing and who they’re with in all aspects. So today, I’m in a very sovereign place to where you could just be like, “Yo it is what it is.” Like it’s so good to not have to hide or be dishonest and people aren’t used to that especially in this industry they’re used to like covering up the story or publicists stopping you like “No, no! Don’t ask that question!” Why??? Are you hiding something? Ask me any question you want to and I’m going to answer it.

Why He’s Wearing A Turban

Obviously, I’ve always been over the top and eccentric in my style of dress and everything that I’ve done but I’ve also been — for all my life — a very extremely spiritual person and it is a certain time where I feel is a need to express those vibrations.

I mean we are constantly growing constantly evolving and I jump deep into it when I feel like my soul is asking for it and when it comes to your attire, fashion is all about making a statement and right now with what [the black] community is going through, I think they need to be some different statements. But ultimately, you know we’ve been disenfranchised for so long and people have been conditioned and programmed to believe that us to have a certain type of flow type; a type of look or almost to be “lesser than” is the norm. So when they see somebody in royal garb or they see somebody rocking a crown, they feel like they question it but I mean I’ve never been one to care what people think about me so I’m going to represent for the kings.

The Real Reason He Went Back To School

It’s in my nature to be an entrepreneur. I call myself an “entrepretainer.” Because I even came in the game not necessarily trying to be in front of the camera but more understanding the business. You know I always looked up to people like Russell [Simmons] and Puff [Daddy] early on because you know in high school, I wasn’t really trying to be a rapper I was trying to get with the record label. I was selling CDs from out at the trunk of my mom’s car when I was 15. Even though I was doing stand-up when I came into the game, my first job in Hollywood for real was a staff writer. To always figure out where the other checks are is what I’m focused on. And I understand music and being in front of the camera is what generates the energy but I’m trying to figure out how it works behind the scenes. So even going back and getting my degrees and the proper stuff, it’s more like “let me really master this business” in a real way. I don’t necessarily want a lawyer telling me what the contract says. I want to read it and set it up the right way. I need to understand the terms in the document in why it’s written this way. And those are the things that I feel like it’s there for all of us to grab. I always say I’m trying to turn these acorns into oak trees. So you give me something small, I’ma make it big.

Honestly, I probably made a few moves differently than the most. For one, I started extremely young and so you know, it’s hard for people to take you seriously at a young age. Even though I was the youngest staff writer in television history; youngest executive producer ever; youngest television chairman and executive ever; people always still thought it was a vanity play. And even the approach that I took to be more easygoing, friendly and more homogenized — to put it in a safe term — I appealed to the masses to where I wasn’t necessarily trying to be like, “Oh, I’m this ‘Hip Hop dude'” or this street smart cat. Even though that’s an element of my life, I chose to be on the number one show on television that’s in 15 million homes twice a week, so there’s a certain perspective and persona that comes with that. So if you see me as a nice friendly guy you’re not really thinking about my business mindset or all the artists that I have helped get their careers going. All the different actors and comedians that I put on. And I’m also never one to really pat myself on the back.

I’m already two decades strong and I feel like I’m just getting started.

Check back in later on in the week for part two of HipHopDX’s exclusive Nick Cannon Conversations.