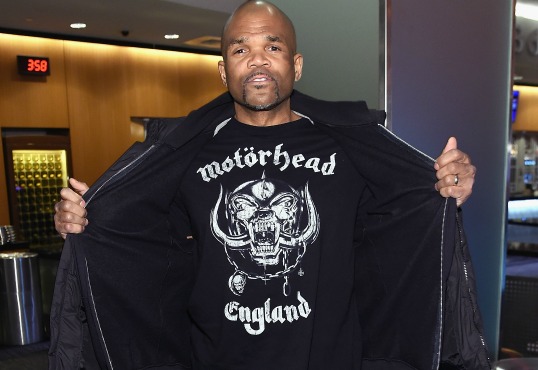 Does Run-DMC Have The First Classic Album? Darryl McDaniels Weighs In

Words like “classic” and “legend” get passed all too easy in Hip Hop debates on the Internet (just take a look at the latest Facebook rap game) but the test of time tells no lies.

Run-DMC, the Kings from Queens, had their legacy widely respected from both rock and rap publications, as they rewrote the G-code with every new single, album and music video they released throughout the 1980s. Today, the group’s name is synonymous with a myriad of cultural appreciation such as fashion (adidas® Shell Toe; leather jackets), remembrance (R.I.P. to Jam Master Jay and the basic art of deejaying) and quintessential rhymes (“I won’t stop rockin’ till I retire!”).

Darry McDaniels recently found his way back into the news when he opened up about his battle with depression that almost cost him his life — by his own doing. Since those dark days nearly two decades ago, he has been a beacon for peace and light and is currently promoting his new memoir, Ten Ways Not to Commit Suicide, whose title is self-explanatory.

When chopping it up with HipHopDX, DMC got extremely animated just mentally reliving the days when his crew was on top of the rap game as it was being formed underneath their adidas, culturally and commercially.

Read along as DMC ponders on the possibility of creating the blueprint of all blueprints when it comes to the rap game. A true legend.

DMC: Do I feel like I made the first classic album?

DMC: Wow! I think Raising Hell is more classic than our first one. The first album would’ve been doper if “Here We Go (Live At The Funhouse)” was on there. Then I would consider it classic because then it would have that classic four sixteen, Cold Crush score, Fantastic Five routine thing on there. I guess it’s a classic because having “Sucker MC’s” on it. “Sucker MC’s” was like a live cassette tape of MC’s in the park you know or up at Harlem World or something.

HipHopDX: It just created a lot of history.

DMC: It was the catalyst of…even though we’re old school, it was the catalyst from the true school, into the old next metamorphosis of what Hip Hop was going to become with Public Enemy, and De La Soul, and Kool G Rap, and Eric B. and Rakim and them. It changed… It’s definitely classic because we have been involved from the Sugarhill era. That’s the significance of that album.

HipHopDX: Absolutely. I have to agree. I can go back to it and still get that vibe, that feeling to when you guys created it and see why people gravitated to it.

DMC: It’s funny that you say that because when I do my lectures in high schools or middle schools, I tell the kids you can’t get it twisted; all school is in a time period. It’s a consciousness, it’s a feeling! These kids you know. When I read comments on YouTube, and a kid wrote I’m 12-years-old, and he’s listening to “Rock Box” and he’s like ‘I hate all Hip Hop now! Why wasn’t I alive? Why couldn’t this be coming out now!’ Like oh wow! It’s funny you say that. That’s what a classic means. When you say classic rock, classic rock doesn’t mean old rock n’ roll. Classic rock means the rock n’ roll that will be always forever better than everything that comes out after it for eternity. Same thing with the old school. You could throw “Peter Piper” on right now and it will buzz, it will have that same energy that it had 30-years-ago.

It’s funny because there was this young guy at my gym that works behind the counter at my gym and he heard of Run-DMC but I guess he never listened to it. One day, I’ve been going to the gym for two-three years but one day, I come in, and this kid who’s probably still in high school, 17, 16 or 17, he comes running up to me saying ‘Oh my god! I knew you was who they said you was but I never knew what you did! Man when I heard that “Peter Piper” dog, that’s the best record I ever heard!’ I was like wow! I’m laughing ‘cause I made that record 29-years-ago. It’s funny you say that because that’s what music is supposed to do. In the year 2080, when you throw on that “Rock Box” song, or you throw on that “Peter Piper” song, what was created in that studio that day we created will be there eternally. Even to the point where even Travis Barker who I’ve worked with and he’s working with me on my music for my new stuff, when I met him he came up to me and said “Yo D, most people jumped on the bandwagon with ‘Walk This Way,’ but I was there since “‘Rock Box.'” Man when I heard that I knew I wanted to be a rock star. I was like dad you got to get me some drums and I want to put a band together.’ I was like, wow!

HipHopDX: That is incredible!

DMC: And that’s the beautiful thing! It was always about the feeling that you get when you hear that great rap song or that great Hip Hop song.

HipHopDX: Definitely. That’s why I was so surprised and that’s why I wanted to holler at you. I know everybody goes through it — you know depression and dark times — but I was surprised to see how immense you had actually went into it to the part where you were actually to the point where you were talking about suicide because Run-DMC is the hardest, non-gangsta Hip Hop act ever.

HipHopDX: You guys never rapped about blasting people or anything, ain’t no one snatching y’all’s chain. How did you get that low?

DMC: It physically sent a message when I lost my voice. But before that, and it wasn’t until I went to therapy and rehab. Therapy is something that men think is all for sissies. But to black men? Talking about therapy and doing something that is making you vulnerable and exposing yourself? I came up with this saying now that when I speak about therapy women applaud me and get excited. When I start speaking about therapy I get funny looks from dudes and stuff like that. With men, especially black men, they don’t realize that therapy is gangsta! It powers you, it makes you the most powerful force on the face of the earth. What had happened was my feelings and my emotions that were depressing me started manifesting me when I started losing my voice. First thing that happened to me was I lost my voice. So I’m dealing with that.

The very thing that I thought was the complete purpose of my existence is now being taking away from me. To put the icing on the cake, Jam Master Jay gets shot and killed. Now, Run-DMC is over. I was losing my voice, Jam Master Jay got shot and killed, and everybody left. That’s what happened. Nobody did nothing to me. Here’s what happened; I lost my voice, Jay got shot and killed, and everybody left. Then right after that, I found out that I was adopted because my father died. That’s what was going through. Once I decided to get clean and sober and go to therapy, I was able to identify with this feeling and then go back to when you know when did you first start feeling like that? For me, the depression probably first manifested itself maybe during Tougher Than Leather, and then the Back from Hell years. But I had no time to identify it.

Tune in this Friday for part two of the interview where DMC breaks down his breaking point and why comic books matter to him.