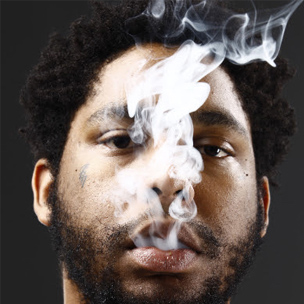 Key! Is At The Center Of Atlanta Hip Hop, But Does He Care?

Dubbed by AllHipHop as “The Dark Horse of ATL,” Key! represents a preliminary shift in Atlanta Hip Hop. Formerly of the Two-9 collective, the 23-year-old rapper has been seen as essential to the area’s emerging alternative scene. Then there are his contributions to two of 2014’s most viral singles in Father’s “Look at Wrist” and OG Maco’s “U Guessed It.”  For someone described by many as an artistic loner, he sure has some heavy connects. Despite relationships with everyone from ILoveMakonnen to Sonny Digital and co-signs going as high up as Wiz Khalifa, Fatman Key could care less.

The extreme nonchalantness in Key!’s attitude could be considered apart of his appeal in an era of Hip Hop where one is only as good as who they are attached to. Clearly, that’s also worked in his favor musically thanks to a nice stream of releases this year in No One Is Ready 2, 808Keys, Give Em Hell (with OG Maco) and most recently, the Fki collaborative project FKeyi. For someone so under the radar, Key! has left his mark on everything everyone loves about the heavily buzzed “New Atlanta.” He completely understands that notion as well.

Key! takes time out of his tour schedule to talk being the center of Atlanta’s alternative scene, hipsters and what his father made him listen to as a child.

Key! Is A Complex Personality

HipHopDX: Speaking with Fader, you mentioned that your collaborative FKeyi with Fki would make you a bunch of money. Did it happen?

Key!: Yeah, it did. I’m on the road right now. It’s cool and tiring. I done seen everything. There’re a whole bunch a different states aint been to. My favorite city I’ve been to so far is Miami performing in a living room.

DX: In a living room?

Key!: It was Joshton Peas’ event. I was nervous at first then it got cool when more people started coming in. He had it seem like Floyd Mayweather had me come perform or something. It was beautiful.

DX: We really enjoyed the “Trap Money” collaboration with ManManSavage released at the summer’s end. How do you decide between doing one-off tracks or full on projects with peers?

Key!: I haven’t done a project with ManMan but that’s my lil brother. It just depends on who it is. It’s just a vibe or something natural and not a planned out thing. I haven’t done too many collaborative projects with rappers. I like collaborating with producers because they’re easier because I’ve normally wanted to work with them.

DX: “Give Em Hell” has you calling your mother the “Queen of Atlanta” after giving your RIP. How did your relationship with her influence your creativity and professionally?

Key!: I don’t know. I really don’t want to talk about that.

DX: Yeah, my mother passed last year of cancer so I understand. Did you find yourself channeling feelings about that into your music?

Key!: That happened a while ago so it’s natural.

Key! Reveals Why He Makes Music

DX: Featured on the Give Em Hell mixtape with OG Maco, the track along with “U Guessed It” don’t feature you two in either one’s video. Is that a decision you regret looking back?

Key!: Naw. At the end of the day, everything is perfect. He’s doing him and I’m doing me.

DX: In the Complex feature done in September you admitted your living situation and that you didn’t have a car. Do you think Atlanta Hip Hop is truly moving away from the flashy trap lifestyle themes to more common everyday folks narratives?

DX: Are you getting closer to what you want?

Key!: Yeah, I’m about to get it when I make it back home.

DX: What’s the source of your transparency musically?

Key!: Cause that’s my music. It’s my life. That’s my craft and my journal, it’s not suppose to be hidden. I don’t make music just to sound cool. It’s a stress reliever.

Key! Is The Only One Who Defines Key!

DX: You sounded very critical of Atlanta’s hipster rap movement during an interview with Fader. Wheres the source of that frustration with the “lets do it again” type artists that you feel are emerging?

Key!: They just looking for a quick come-up and don’t appreciate it when they do get it. I don’t know. I know some people who get where they’re going, they flop and be mad at the world. But I be like you got it in two seconds, you didn’t know what to do with it. Then there are some people who work their whole life and haven’t made it yet. When they do make it, they’ll appreciate it more.

DX: Is there anyone out of Atlanta that you feel is putting in work or you enjoy?

DX: You seem to fit between Atlanta’s mainstream and alternative Hip-Hop scene. Do you see them both as one in the same?

DX: Do you consider yourself almost the center of what people are calling “New Atlanta in regards to the amount of people you’ve worked with in the area?”

Key!: Naw, I don’t put myself in the “New Atlanta” category. I’m an artist everyone runs to to boost themselves.

DX: With that in mind, do you feel under appreciated in your contribution to Atlanta’s Hip-Hop scene as a whole?

Key!: I don’t, that shit gives me checks.

DX: Jeezy and T.I. recently announced a joint project. Does that excite you as an ATLian?

Key!: Naw, not really. I don’t even listen to either one of them no mo. I don’t be listening to shit except my music. Not to sound like a dickhead but back when they first started that shit would have probably been fucking Grammy nominated or something.

DX: From your point of view, how did both MCs shape Atlanta’s creative scope in terms of Hip-Hop?

Key!: They were just making good music just like how we is now. I don’t know. When T.I. was popping, I was young like in middle or high school. I wasn’t paying no attention to it. Jeezy was a big trap artist like he was classic, just like Rick Ross is today.

DX: What were you musically into back then?

Key!: I was listening to, but not by choice, like neo-soul and underground artist like Goodie Mob and shit. My dad use to listen to that shit and I was frustrated at that shit.

DX: Looking back, has that helped you in the way you approach music?

Key!: Yeah, in my way of thinking. As a grown man, I wasn’t raised on dumb shit or pointless music. Like I said, music is natural to me. I can’t overthink shit or I won’t be able to do it. I don’t like getting too deep. I don’t even question where things come from anymore.

Key! Wants To Introduce You To “Millionaire Key!”

DX: Do you think the diversity present in the Atlanta Hip Hop scene is a blessing or a curse?

Key!: I think it’s good for the city. It gives a sense of competition where things aren’t boring. It’s new types of venues and parties for the young people to go to. It ain’t the same ol’ shit where folks get shot up at. It’s a lot of hipster events in Atlanta now because that scene is getting bigger.

DX: How have you been able to broaden your scope within the scene?

Key!: Just taking my time and keeping myself on the road. We book our own shows and stuff. It’s not me separating myself from Atlanta, I just haven’t been home in a while because I’m working.

DX: What do you miss most about Atlanta while on the road?

Key!: In Atlanta I get to wild out and no-one hears about it. I would talk about it but it would be illegal.

Key!: I’m about to get me an apartment and go record.

DX: For a new project?

Key!: I’m working on a few projects but I’m going to keep them under wraps until next year. Expect major looks. It’s going to be a millionaire Key! next year.

DX: Have any veterans of the scene reached out to you? If not, are you looking forward to that time?

Key!: I don’t make myself open to everybody. If I want to work with someone, I normally look for them myself. I’m not that friendly. You don’t have to be nice to everybody. Some people like working with everybody but I know my worth.

DX: One of the things I noticed was how much you enjoy making your own music and listening to it. When exactly did you reach that point in confidence?

Key!: It probably happened more recently but it should have happened a long time ago. I’m an artist and if I worry about everyone else and what they’re doing then I forget about me.