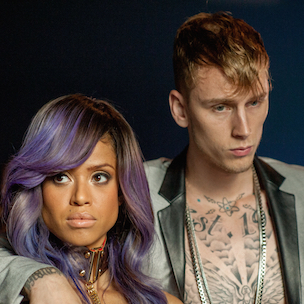 Machine Gun Kelly Co-Stars In "Beyond The Lights;" Says Albums Would Sell If Artists Made Better Music

Machine Gun Kelly’s government name is Richard Colson Baker, and the oft-cited punk rapper is moving into film. Why he would is obvious: declining album sales, rising access to artists, and the fractured major label system get’s harder to navigate by the hour. He’s also an artist. And he finds himself spreading his wings into different categories. Of course, it’s nice to have a role where you can basically play yourself with a twist as he does in 2014s Beyond The Lights written and directed by Gina Prince-Bythewood. It also helps when the topic you’re covering is one you know really, really well: music industry machinations, the media, and staying true to yourself.

Somehow, the Cleveland kid has managed to do all three. He’s kept it local, working with imprint Empire Recordings on his last album Black Flag, and, since his 2011 signing with Bad Boy, shifting his sound into whatever the hell he wants it to be.

He’s made the rapid-fire Hip Hop he’s come to be known for as well as electo-pop, like on “Good Time” featuring himself and Lorine Chia, and straight up EDM with Steve Aiko.

Of course, MGK’s never been afraid to speak his mind. When queried as to why he thought there’ve been no platinum plaques in Hip Hop this year he had this to say:

“Maybe it just wasn’t platinum worthy music this year. I don’t know. I mean, people are fucking buying music. The albums would sell if there was an artist you could love.”

That sort of candor is refreshing, and that’s what he’s always brought to his raps and now to film. He had other things on his mind as well, though. As such, the Cleveland spitter also spoke on working with his gorgeous co-star Gugu Mbatha-Raw, Lebron James bringing jobs back to Cleveland, and whose fault it is that record sales are declining.

DX: Beyond the lights is your first A-level movie role. What was it like on set? And how has rapping helped out with the acting?

Machine Gun Kelly: I think rapping aided more so in terms of charisma, being comfortable in front of a camera. The role wasn’t too far from who I actually am so it wasn’t too complicated even though it was my first film. The hours were long and the director was very specific about what she wanted. So that was the difference between rapping and acting, you’re playing a character that someone wrote and controls and you have to make them happy rather than doing it as for yourself.

DX: Right. I mean the film was how the music industry can kind of warp personalities into something that they’re really not. When you were interacting with the leading lady, did you ever channel anything that really happened to you and take that emotion into the role?

Machine Gun Kelly: To be honest, I think I was just living a fantasy while I was on set. I haven’t really been in a relationship since high school. I’ve been living this extremely fast life, different girl-different night type life for over five years now. So my job on set was to be dedicated to this one girl in the movie, and to really develop feelings… Even though my character was faking the feelings at first, he really does have this deeper lover for the girl. It was just cool because that’s not how I live my normal life, and I got to live this fantasy of meeting this gorgeous girl that was mine, she’s a superstar. Everyone has that fantasy of dating a celebrity. I just channeled the fantasy.

DX: The film was a very standard love story, but it was definitely moving. Do you think the characters were well rounded?

Machine Gun Kelly: Yeah I think they were very well rounded. I think it shows what happened to people as they come into the industry.  I think that’s an important thing to realize because as fans or people looking from the outside, we create that monster and I don’t think people get to see that. But they’re just people man. Celebrities are just people too, and I think that’s one of the messages from the film as well.

DX: Do you guys actually check Twitter and things of that nature to see what’s going on on the fan side?

Machine Gun Kelly: I do, man. And it’s messed up because I think you always end up keeping an eye on the negative stuff more than the positive.

MGK Comments On Lebron’s Return & Perceptions In The Music Industry

DX: To switch gears a little bit, Cleveland is having a hell of a few months with Lebron coming back and everything. How do you feel about him being back in town?

Machine Gun Kelly: I had made those comments that I made when he left on behalf of the city because that’s exactly how the city felt. And now the city’s happy. I’m happy. I’m excited for any new money to come to Cleveland, and anyway to better our community. It’s definitely something that is a factor in helping our city.

DX: Did you think he would eventually come back?

Machine Gun Kelly: I didn’t. But I didn’t realize how important someone like that was until he actually left. I saw friends of mine’s parents lose their jobs. I think it’s crazy how an economy can be so dependent on a sport or a player. But when you’re in a city like ours, it’s so blue collar and there’s not much going on. So when he came back, you just saw this instant glow around the city. So I’m glad it happen.

DX: To bring it back to the film a little bit, you mentioned how the music industry can change people’s perception of people. Have you experienced something like that?

Machine Gun Kelly: I think my whole career has been music industry backlash. That’s why I stay the fuck out of it.

DX: People have this idea of celebrities, and kind of put them on a pedestal to give them more power or influence than they should. Do you feel like you’ve been put into that place as well?

Machine Gun Kelly: I definitely do, and I feel like we are put into that place when people approach you with cameras all day and treat you like a zoo animal rather than be polite. I think this generation has become spoiled and lost the meaning of what it means to be a fan. So that’s why I take little baby steps into coaching my generation how to be a fan again. That’s one of the things we have as human beings left; the excitement of being in awe of someone’s talent. Now it’s not even about talent, it’s about image, it’s about who’ll kiss your ass more. And that wasn’t what it was ever about. Artists don’t owe you anything more than great music and great performances.

So I do little things like refusing to take pictures with people unless they’re taking it on a Polaroid or Kodak. Because that means that you’ll go through all that effort to develop the photo, to have that picture of you and you’re favorite artist, as opposed to taking a picture of me on your phone and posting it, and never really having to pay attention to it. I don’t think these kids are taking those pictures are framing them or keeping them in a room. Do you really love the artist, or you just wasting their time by being a dick who just wants a picture and you don’t even know 3 songs.

DX: Do you think that people are buying fewer records because they can stream, or do you think people aren’t necessarily appreciating music right now?

Machine Gun Kelly: I think people aren’t appreciating music right now but I think that’s a lot on the artists out there. Right now, we’re paying DJs 3 or 4 times more than bands to play, festivals are booking DJ headliners instead of booking bands. That kind of takes away the art of it, because there’re no lyrics in these songs. They’re stripping down the music part of it with using different instruments…I don’t know, it can be viewed different ways. I don’t think it’s lost though. I think buying music will always be relevant as long as there’s something worth buying.

DX: We’ve been having this conversation lately because there have been no platinum albums this year. I was wondering if you’ve been thinking about that and do you think we are living in a sort of post-platinum era at this point?

Machine Gun Kelly: Maybe it just wasn’t platinum worthy music this year. I don’t know. I mean, people are fucking buying music. The albums would sell if there was an artist you could love. But I’m not too impressed with too many artists as an artist, you’re more in love with the songs, and that’s not enough for me to buy an album.

DX: You were recently on Steve Aoki’s “Free To Madness.” Can you talk about what it was like working with Steve?

Machine Gun Kelly: It was funny, because he called me like, “I’m doing an album and I want to get you on it. I want to get like a punk rock energy to EDM.” I ended up meeting him at his house, but he actually had to leave to Europe though like in the middle of making the beat and shit like that. So at his house, I was outside, but my ride wasn’t there yet, so I actually wrote the entire song on Steve Aoki’s curb, while he was leaving to the airport and I was waiting for my ride. And we re-recorded the song like five times. Because we recorded so long ago, and the sounds in EDM were changing to rapidly, that we had to keep changing the fuckin beat to match what was going on at the time. They it finally came.

DX: You have a film in post production called Punk is Dead. I wanted to know how you got involved?

Machine Gun Kelly: So Punk’s Not Dead was one of those cult classics when I was a kid. I was huge when on that movie. I got word that another one was being made. Like a sequel, but based off the next generation of those characters. I had called the director, and I had my agents set up a meeting with me and the director, and I told him like, “Yo, that there’s no fucking possible way I’m not getting this role I’d do whatever I have to do. We made it happen, and that was actually the 3rd film I did. I have a 2nd film that’s a horror movie that’s gonna be coming out next year as well.