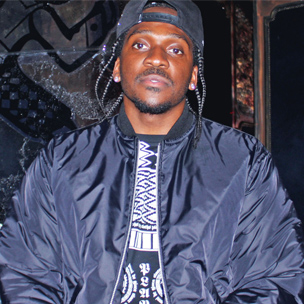 Springtime in New York City was a misnomer for mid-April as a baby snowstorm hit hard in the midst of the city’s downtown Tribeca neighborhood at the Tribeca Rooftop bar. Bacardi was hosting a #RepYourFlavor VIP event, showcasing their new Mango Fusion flavor for a handful of sneaker heads, tattoo aficionados, and music industry so-and-sos. Somewhere in that mix fits Pusha T, who showed up with micro-braids that fell like a mane, and barely a smile unless he was discussing Pharrell Williams’ part in his upcoming King Push project. The Clipse veteran has remained solidly consistent as a soloist, following his departure from his brotherly duo with No Malice (2009’s Til The Casket Drops marked the end of an era for all Clipse fans worldwide). Push delivered solo projects, while simultaneously aligning with Kanye West’s G.O.O.D. Music imprint, offering his much needed “EGHCK!” on the crew’s tracks.

As we witness an arguably weird time for Hip Hop—where the “young man’s game” mantra hangs overhead for some veteran acts — Pusha T isn’t fazed by it. His evolutionary stance with his craft is taking him far—further than anyone ever imagined, since the “coke Rap” life expectancy is only until the last line is blown. Pusha T is no longer that dude though. He’s the guy who can still rhyme like he’s slinging rocks, but can sit at an event with hipsters knowing he’s their god. What a unique position to be in: to have the respect of real rap, trendy rap, and progressive rap. Perhaps that’s why they call him King.

HipHopDX: What has the process been like getting into King Push?

Pusha T: For King Push, I’ve been taking my time with it. I’m not rushing it, and I’m not forcing it. Everybody knows I took like a month off of touring and everything to go to Miami and get with Pharrell and Chad. I got back on tour, and I’ve been taking beats. Shout out to Needlz, shout out to Nottz…there’s other producers who have been submitting things and coming up with some hot stuff. I just left L.A. I was out there meeting with ‘Ye about the King Push album, listening to beats with him and trying to get everything right.

I’m taking my time. King Push is a proclamation of where I feel that I am in Rap. I feel I’m at a king level—a “crown me” level of Rap. I feel like My Name Is My Name really proved that, and I’m not gonna rush it. I’m just gonna put it together properly, so when it drops, it will be everything that it’s supposed to be.

DX: So many artists that have been in Hip Hop for decades struggle with relevance. What about your process, who you are and what you represent has kept that from happening to you?

Pusha T: Well I think it’s about consistency. Everybody knows I make street Hip Hop, and that’s a lane I’ve really grabbed a hold of. I’ve really not tried to let anyone take that from me. It’s articulate, lyrical, metaphors; it’s still fundamental Hip Hop. But it paints that picture. I’ve watched people try to paint it, and they do a good job, but I think it’s still something that I do differently than everybody else.

DX: How was it getting back in the studio with Pharrell?

Pusha T: Oh, it was awesome man. We linked up for “S.N.I.T.C.H.” as well from My Name Is My Name, and I was really happy with the outcome of that. The energy’s always good with us. I’m making music with one of my best friends—the person who brought me into the game—it’s never a losing situation.

DX: It feels like you bring the Hip Hop back out of Pharrell. He travels through Pop music…

Pusha T: Yeah, he knows that’s really the only thing that I want to hear. He knows there’s a certain thing I want to make, and Pharrell knows he has to go there when it comes to that.

DX: Are you tired of being asked about the Clipse reunion?

Pusha T: You know, I’m cool. I’m thankful that people still want it, and I’m ready whenever my brother is ready. P and ‘Ye are both on deck, so it’s just whenever my brother’s ready to do it, and we can come to an agreement, a compromise and a timeline. I’m down…I’m with it.

DX: From the moment you started until right now, what do you think has been the biggest change in Hip Hop?

Pusha T: I feel like it used to be a lot more about credibility. I feel like Hip Hop has sort of lost a little bit of the code: reality codes and street codes. People are just not holding that in account as much anymore. At the end of the day, the music’s good, and I love where we are.

DX: Is it weird that you see coke Rap becoming a type of popular mainstream thing?

Pusha T: Yeah. I was just talking to CNN about coke Rap. And I was like, “Man, that’s so funny, because I know who made that term up.” The person who made that term up was like a blogger who loves Pusha T and Malice for articulate Rap and metaphors and things like that. But to coin it “coke Rap”—to love me for what you love me for and coin it that—is annoying. But it is what it is. They make these subcultures and genres. They didn’t call it coke Rap when Melle Mel was rhyming about the streets and so on and so forth. So it’s whatever.

DX: Well the idea of cocaine went from moving weight to something people stuff in their makeup compact at dance parties…

Pusha T: Yeah, that’s reality. It’s not called, “coke EDM” either. They don’t do that at all.

DX: Exactly. But speaking of EDM, when OutKast performed at Coachella last weekend, people said the EDM audience wasn’t feeling the legendary reunion of OutKast that was years in the making. You got love on those stages. What is it about being able to perform for so many different audiences and still being able to speak to them?

Pusha T: I consider myself blessed to be able to talk to such a wide variety of people. I wasn’t at Coachella, but OutKast is one of my favorite groups. I find it hard for anybody not to be into what they’re doing. But I don’t know. I wasn’t there. Maybe the crowd was a crowd that was not into Hip Hop.

DX: So in between creating King Push, what’s next for Pusha T?

Pusha T: That’s really all I’m working on right now. I’m focused on King Push, and I’m probably gonna do every festival this summer…every European festival. I’m doing a European tour and a Canada tour. We just out here.

DX: Do you find that the energy is different when you’re sharing a building with EDM and Indie-Rock acts?

Pusha T: Well I like the energy because these festivals are places where people pick and choose what stage they go to. So anybody standing in front of my stage is there for me.

DX: Why do you think Hip Hop specific festivals are no longer the move?

Pusha T: I’m really not sure. My biggest thing as a Hip Hop artist, is I want to see who’s going to be the Rolling Stones of Hip Hop when it comes to touring and stuff. I hate to hear that any festival is on the decline—especially for this genre of music. To me, that’s gonna be the win for the genre.