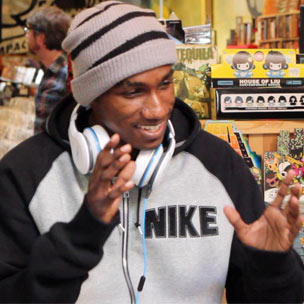 Hopsin Compares "Sag My Pants" To 50 Cent's "How To Rob," Recalls Rhyming With Mystikal At BET Cypher

In this interview with HipHopDX in Atlanta’s Criminal Records during A3C 2012, Hopsin discussions the connection between his “Sag Yo Pants” and 50 Cent’s “How To Rob,” Funk Volume, rhyming with Mystikal, and the status of his long-awaited follow up, Knock Madness.

HipHopDX: Is this your first A3C?

Hopsin: Yes it is. Very first one, so I have no idea what to expect.

DX: It’s been a good year for you, right?

Hopsin: Yes. It’s been a very good year. I haven’t put any music out, but it’s been a good year.

DX: I think there is a part of that that’s a testament to all the work you’ve put in before you got to this point, right? You get your reps in and then those reps carry you when you’re [working to get to the next stage].

Hopsin: Yeah, that’s kind of what’s happening right now. And I prefer quality over quantity. I do drop stuff slow but I try to make sure it’s [a good quality].

DX: You were originally signed to Ruthless Records. Now you have started your own independent label.

DX: How is it running – or at least being the flagship artist – for a label? Is it any different than being on Ruthless from a creative standpoint?

Hopsin: It’s completely different. When I was on Ruthless [Records], they tried to tell me what records I should focus on making. Now I can do what I want. They tried to take the artist out of me and tell me to do what other people were doing. Now I can do whatever I want to do exactly the way I want. Every artist on Funk Volume [Records] does it that way, so it’s really comfortable. There’s no complaints. Every artist can do whatever they want to do. That’s the main difference. We can be ourselves. We don’t have to try to be like them. We can just do us.

DX: The “Sag My Pants” joint. To me, that reminds me of 50 Cent’s “How To Rob.” 50 Cent dropped “How To Rob” and he called out all the things he didn’t like that were happening. To a degree, you kind of do the same thing on that track. Was that a direct inspiration?

Hopsin: 50 Cent is a big inspiration and I do like the song “How To Rob.” The type of emcee that I grew up as and the world of emceeing that I grew up in was to just call [out] that stuff that you don’t like. So I spoke on a lot of the things I didn’t like about the industry and I didn’t hold back. That’s the kind of emcee that I am. If I see something that I dislike…I mean, I just speak what I feel. That’s all it is. It’s not that I dislike stuff. It’s just what I’m feeling and I talk about stuff.

DX: You run with such a level of positivity, too. Like the “Ill Mind [Of Hopsin]” series, for example. Especially this last one that dropped, [“Ill Mind Of Hopsin 5”]. That one was extremely poignant and speaks on the broader issue of just being a positive person; being true to who you are.

Hopsin: Yeah. I had to make that song because I live on this Earth and am surrounded by people who are making it kind of hard for me to even live on this planet because everybody is all brainwashed and stupid. I’ve been put in this position for a reason so I might as well use my powers for good and try to shed some light. No other artist is doing it, and if they try, they’re not doing it in a way that’s [relatable]. I had to do it in a way that sounds like I’m actually still one of them. No rapper is doing it that. I just spoke my heart. That’s what everybody’s been seeing. I’ve had that conversation with so many people before that song was created – friends, and people I meet at shows, wherever. A lot of people feel that way so I just put it on a song and talk about all those things that I see going on. [I wanted] to actually put it in their face and let them know that they should stop fucking up and do something positive.

DX: Hip Hop’s always been a real recognize real kind of environment. That’s how we like to feel. Are you ever surprised by the amount of acclaim that you’ve received? You’ve got the XXL Freshmen cover. You’ve got multiple videos with multimillions of views. I assume you’re getting hit by all kinds of different artists to direct their videos.

Hopsin: I understand why it’s happening. It’s kind of weird because I don’t see myself as that big of a deal in my own eyes. But to other people they’re like, ‘Oh, it’s Hopsin,” or this and that. I’m not too interested in working with other people. My goal is no longer to try to become a big rapper that’s rapping to prove that I’m better than anybody. I just want to help people and spread my message. I don’t care if an artist is dope or if they like my video or made this popular song or whatever. The benefits are now more like self benefits. All this Rap talk, I’m not driven by that. I’m done with that stage in my life.

DX: When did that [shift] happen? Did that happen as a result of the Ruthless situation?

Hopsin: The Ruthless situation, I was raw. I was in that mindset where I wanted to be big. I wanted to get revenge. I wanted to benefit myself. I didn’t know the truth about record labels and all the B.S. Now, I just see the power that I have over a lot of youngsters so I’ve got to keep it positive. I don’t care about being famous. I just care about changing people’s lives. It happened over time.

DX: I grew up in the 1980s and ’90s and videos used to be the thing. We were talking to King Chip earlier and he described it like sometimes [he] wouldn’t go outside because you were waiting to see this video. It was that type of feeling. All my favorite videos were by Busta Rhymes and Missy Elliott. When I watch your videos, I get that feeling. These are like magnanimous concepts that you’re putting out there.

Hopsin: Those were the times when Hip Hop was fun and entertaining. It was just super creative. Everybody was doing something different. Somebody’s doing this. Somebody’s doing that. Somebody’s doing that. Now it’s just one lane where [it’s] girls, smoking weed, cars, and money and all that. Those elements have been in Hip Hop all the time, but they didn’t glorify them the way they are doing now. There was a lot of other stuff. Now when you see it, it’s just stupid. Every artist is just on repeat. It’s the same person all over again. Super tattoos. Dreadlocks. Sunglasses. Whatever. It’s just the same guy over and over. Same sound. Same type of beats. Same message. It’s like what is this? This is stupid. That’s why I say I don’t want to do that anymore because it’s retarded.

But back in the day, I was definitely into the videos. I used to stay in to watch a video or whatever. Couldn’t wait to watch the little TV behind the scenes for the video release…

DX: [MTV’s] Making Of The Video. You’re bringing it back!

Hopsin Discusses The Lost Art Of The Freestyle Cypher

DX: Funk Volume is filling that void. What’s it like within your organization and working with the artists on your label?

Hopsin: It’s dope because everybody came from that emcee foundation. We all have slightly different styles, but we all came from the super emcee foundation where we know how to rap; we know how to do different type of styles. There are styles that we take from one another. We can all sit back and do freestyle cyphers. A lot of rappers can’t do that. If you tell them to freestyle, they’re like, “Nah, man.” They try to come in with something that they wrote in the studio. We all just like the art form of Hip Hop in general. We all know how to really rap. We all know how to really rap. You can approach us and try to call us out and you’ll see that we all know how to really rap. It’s cool to have a team like that because we’re not just in one little lane over here – some Swag Rap or some lyrical emcee diabolical metaphorical Rap. We just do a lot of things. I want others to see that so the new generation of rappers that come after us can have a big variety to choose from instead of, “Let me rap about hoes and whatever with stupid metaphors and let me try to do that.” There’s so many different styles to choose from that you don’t just have to take that one lane. There’s so many options to choose from to express yourself. We just want to show that to the world.

DX: What did you think of that BET Cypher? Who do you think had the best verse in that cypher?

Hopsin: In the one that I was in specifically?

DX: The one that you were in specifically. Did it feel competitive?

Hopsin: It’s not really competition. Everybody came with it. They just did what they do. There’s different types of rappers, you know. I have my style. Mac Miller had his. ScHoolboy Q had his. And, what’s his name…

Hopsin: He had his style. It wasn’t meant to be a competition. We just did what we do.

DX: Was it cool rocking with Mystikal?

Hopsin: Yeah. It was very entertaining seeing Mystikal get down in person. If you watch the cypher, you see us all just laughing. Not laughing like he’s retarded. Laughing like, “Man, this is so cool finally seeing him in real life!” His energy is crazy and kind of intimidating, too. You see us kind of cracking a smile when he was doing it. He had super big energy. He came prepared, I’ll tell you that. He’s a real cool dude. Super, super cool.

Hopsin: I don’t know right now. I’ll let you guys know. If you follow me, you will know soon. As of right now, I’m just on tour and then I’m going to go home and enjoy the holidays with my family.

Hopsin: Still working on it. Every time I update something, I never mean it. It’s not because the label’s going, “You can’t put it out.”

DX: It sounds like it’s probably what you said earlier about when you put something out, you want to make sure it’s quality. You’ve got an audience. You’ve got kids watching you.

Hopsin: Yeah. I am a perfectionist. But when it comes out, you’ll know it’s out. I promise you.