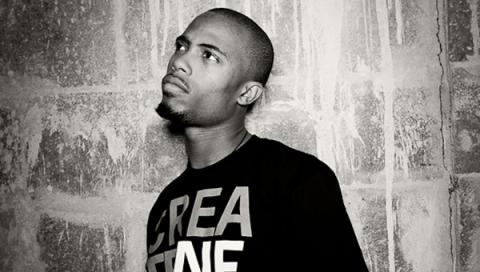 B.o.B: Out Of This World

We love labels. Not just critics and/or bloggers, but even you too, dear reader. When the market is oversaturated with a million aspiring MySpace emcees rhyming into their laptops, sometimes it’s nice to have an idea of what to expect before you click that link. And then an artist like B.o.B comes along, and you’re not quite sure what to think.

The phrase “breath of fresh air” has been used to the point of becoming a cliche. But when you see Bobby Ray rap, sing, produce and play live instruments on the mixtapes he seems to effortlessly keep churning out, then the praise is understandable. At a time when the demand for more material from B.o.B is higher than ever, it’s ironic that he needs a label. And if you’ve looked at any SoundScan figures within the last decade or so, labels really need more artists like B.o.B. Unfortunately for fans, things were halted as the artist who defies being labeled tried to figure a way to work things out with the label that had the best means to execute his plan…or so we were told.

Billboard reported rumors of a refused 360 deal. Unsanctioned mixtapes were released, videos were pulled from YouTube and things got ugly. Few people will know what happened behind closed doors. But when the dust settled, B.o.B emerged with a new mixtape, a May 25 release date and a viral video of his boss, Julie Greenwald, championing his cause. Do you remember the last time a label president hit YouTube to assure people that an artist was not being held hostage?

During a stop on his promotional tour, B.o.B explained the delays, his musical background, and why he hopes to become the rare artist who can ditch the philosophy of “Man Versus Machine” for one that works for himself and his label.

HipHopDX: You’ve mentioned bloggers and critics before in a few songs. There’s a large portion of the Web that helps you get your music to more people versus the side that just criticizes. How do you balance that out?
B.o.B: I think it balances itself out naturally, because I benefit from all of it. The hate is great, ‘cause it puts food on my plate. I eat it like steak, and it’s fuel for me. I really don’t see it though…I don’t see a lot of it. I guess I just don’t focus on a lot of it. I kind of keep my eye and ear to the street a little bit just to see. But, as far as good comments and bad comments, I take it all the same really. A lot of people just say stuff to say it.

HipHopDX: On the May 25th mixtape you have a song with Asher Roth called “Fuck The Money.” Do you feel that between all the opportunities for overexposure the industry is set up to burn new artists like yourselves out?
B.o.B: I feel like sometimes, yeah, the industry can let greed, power and ego get in the way and push an artist to exhaustion. It’s not the actual artist that’s being exhausted. They just push it so much on the consumer that [people] say, “Jesus Christ, we don’t want any more of this. We’re just so sick of it.”

And it’s not even so much about talent, you know? It’s really just about breaking the monotony. If everybody sounded like me, I would get sick of it. It’s like, God I already don’t like listening to myself as it is. I hear my music all the time. Monotony is just boring, and I feel like there should be more of a balance.

HipHopDX: You produced Citty’s “I’m The Cookie Man” at age 14. How does someone that young get a beat placed for what turned out to be a pretty big regional single?
B.o.B: Getting a beat placed at that age? You obviously have to be connected. You have to have a good team of people. First off, you have to have a good song. As a producer nowadays, because everybody has their own beats, you have to be more flexible. You have to find a balance between the beats you want to put on mixtapes or songs that artists will release and beats that you keep to actually sell. You have to understand what you’re dealing with and the politics of it. I was fortunate enough to grasp that when I was 15.

HipHopDX: Were you playing live instruments before then? If not, what led you from the beat machine to the instruments?
B.o.B: Really, I was messing around with live instruments before that. I played the trumpet and the piano when I was a kid. I played the French Horn when I was in high school. I learned the piano, because without that you can’t do anything as a producer. I picked up the guitar recently, and I started tinkering with the cello just a little bit.

HipHopDX: That’s a lot of instruments. So when you first get a beat or make it yourself, how does your songwriting process change between writing, singing or playing an instrument?
B.o.B: You pretty much have to look at the process the same. No matter what the approach is—if I was gonna sing, snap, clap, stomp, slap a guitar, or just do a beat machine—you’ve gotta put yourself into that music. It’s like the beat is the puppet and you’re the puppeteer. You just manipulate it.

HipHopDX: Okay. Let’s switch gears and get to this upcoming album. The last issue of Billboard talks about how you and Atlantic struggled to agree on the deal. You said you were still learning to lose your ego. Was there any specific event that made that necessary?
B.o.B: The ego is that voice in your head that goes, “I’m not doing that! I’m B.o.B. I’m Bobby Ray. That’s not what I do. That’s not my style.” And you’ve gotta compromise. You’ve got to meet them half way. That’s something that I had to learn. At the same time, you’ve got to have integrity.

It depends on what you want to do as an artist. Some artists are in it straight for the money—bam, get the moolah and get out. Nothing’s wrong with that, but that’s not what I want to do. Because of that, I can’t just do everything the label wants me to do. I’m not just about money. [Labels] are just about money. It’s just about the dollar…that’s it. With me, it’s not just about that. When I approach a situation, I’m not just thinking of how I can benefit myself. I’m thinking of how I can benefit multiple people. That’s where the mentality differs, and that’s where I had to compromise in terms of working with the label. They’re like a necessary evil.

HipHopDX: The clothing label LRG is one of the big reasons you’re in town. They’ve sponsored a couple of your mixtapes, and we’re in a store surrounded by LRG gear. How did that partnership come about?
B.o.B: I actually have some LRG on now [laughs].

HipHopDX: Naturally.
B.o.B: Why are you not surprised that I have on LRG? They’ve been supporting me since the beginning. Back when I was bummy and didn’t have any clothes, they sent me some clothes. They made sure I was fresh and LRG’d up. We’ve both just grown as a team. It’s a really good chemistry in terms of style and fashion.

HipHopDX: One partnership that people didn’t expect to produce such good chemistry was you collaborating with Rivers Cuomo of Weezer…
B.o.B: How’d you hear that? Nah, I’m just joking [laughs]. I’m excited to see how people will respond to the music and what type of impact it will have when they hear it. The type of collaboration we did isn’t what you’d typically expect, but I feel like it’s a good song.

HipHopDX: Did you check out his song with Lil Wayne and Jermaine Dupri?
B.o.B: I actually haven’t heard that, but I need to now that you mention it. I didn’t know that he did that.

HipHopDX: So I take it you’re a fan from the days of “Buddy Holly?”
B.o.B: I actually love “Buddy Holly.” Some people don’t like that song, but I love that song [sings chorus]. I ain’t gonna sing the whole thing…

HipHopDX: People are fronting. Everybody likes “Buddy Holly.”
B.o.B: I know, that’s what I was saying! I heard somebody say they didn’t like it, and I was like, “I love that song. It’s the shit!”

HipHopDX: Do you think your generation is more open to those types of collaborations and fusing elements from different genres like Rock into their music?
B.o.B: Definitely. I feel great to be in the generation I’m in right now. It’s exciting, it’s new, and you’ve got a lot of artists who are not following the rules at all. People are blurring the lines of all the genres and pretty much doing what they wanna do.

It’s good because it’s at an underground level. That means a label, a system, or anything else does not govern it. It’s pretty much whatever the people like and whatever the Internet wants to hear. Typically, when the underground hits the mainstream, that’s when it loses its essence. Then it becomes manufactured and processed. But I love underground music, because it’s just raw.

HipHopDX: You’re signed to Atlantic through Jim Jonsin and T.I. Have you got a chance to see or work with Tip since he was released from prison?
B.o.B: Yeah, I actually worked with Tip on some stuff from my album and some stuff from his album. We came up with a banger—might I add that. He seems like he’s really focused now that he’s out, and he seems like he’s got something to prove. I’m excited to see what he’s gonna do, and I’m excited to see what the songs we made are gonna do.