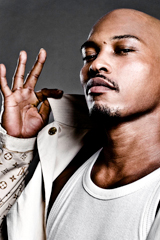 Fans of early ’90s hardcore Hip Hop might appreciate how it is to hear Sticky Fingaz laugh. As the face of Onyx – literally, Kirk Jones was a rugged child who would grimace, spit at the video lens and bark lyrics that had millions getting riled up.

Fifteen years later – but not entirely removed, Sticky is suddenly a major player in Hollywood, who seems to empathize with the networks and studios’ decision-making, while still remaining an artist through it all. On the release of Blade: The Complete Series coming to DVD, a time-capsule of Sticky‘s one season, top-rated program on Spike, the multi-talent spoke to HipHopDX.

With his Major Independence company blossoming with Sticky‘s directorial debut, A Day In The Life combining his passions of then and now in this cinematic piece that features exclusively rapped dialog. With a soundtrack leading the way for the Lion’s Gate-backed film, Sticky Fingaz is nestled in Tinseltown with a lot more creative control than your average rapper. He explains his methodology, his views on a year of Blade, and how he might update one of his controversial rap classics nearly a decade later.

HipHopDX: Do you think that Blade was pioneering in the sense of taking something from film and continuing it on television?