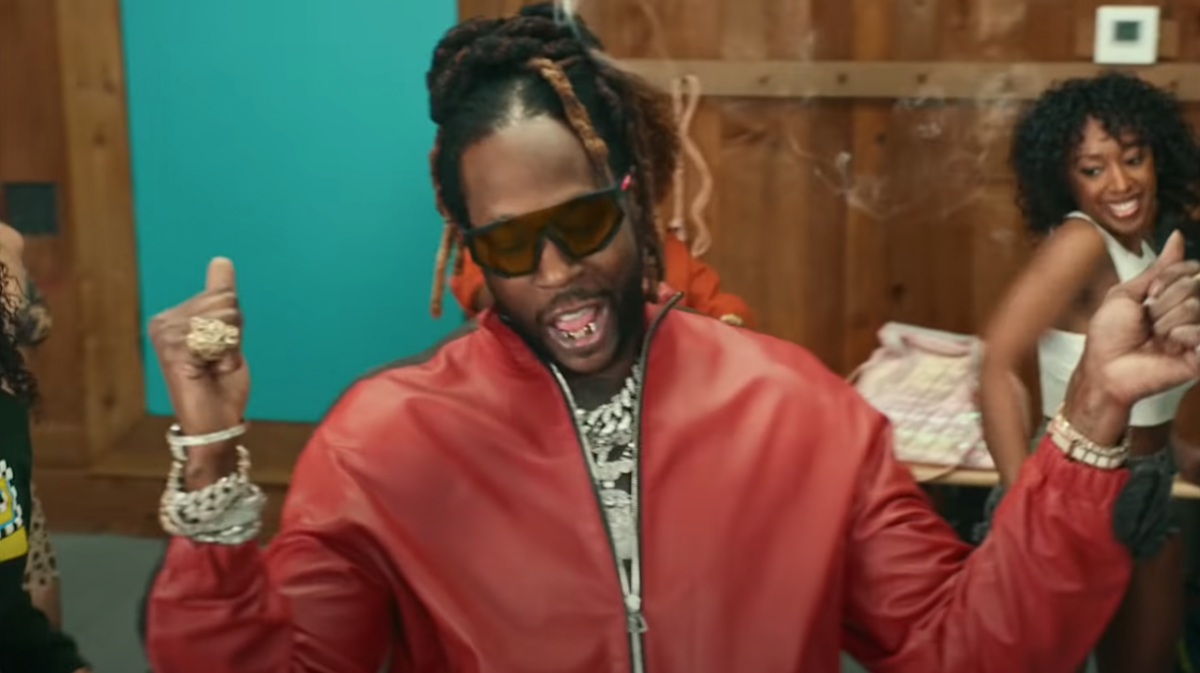 Over the years, 2 Chainz has said some ludicrous things in his raps, but his penchant for using graphic imagery and food metaphors to describe sex acts showcases a different — one could dare say romantic — side to the Drench God.

In light of Tity Boi’s latest release, Dope Don’t Sell Itself, here are some of the more provocative lyrics the “Neighbors Know My Name” rapper has spit over the years. Hopefully, you can find one or two to present to your Valentine this year.

The first track off of 2 Chainz’ 2012 debut is a provocative opener with Tity Boi dropping bars about how he swaps women with his friends like a game of “hot potato,” and how he buys him and his girl matching Armani before he “puts it in her tummy.” All the while, Weezy is rapping a hook about how he detests period sex.

“I was in there just messing around and I come back to hear it’s [the] #1 [track] on his [album],” Weezy said in an interview with MTV after he received some slight blowback for the hook. “Please don’t judge me from that – my bar game is way higher than that, man.”

The track itself is admittedly raunchy, but there remains one bar from the Drench God so grotesque it’s worth noting in its entirety. “Known to act a donkey on the camel-toe,” Chainz raps. “Then take the camel-toe and turn it into casserole.” 2 Chainz is a master of combining food with sexual wordplay, but could this imagery be a step too far?

The lyric “let’s make a sex tape and put it on Netflix” became a mantra for 2 Chainz following the track’s release in 2013, and he revealed in an interview with MTV later that year that he fully intended to release a sex tape on Netflix, saying the tape would be comprised of recycled “collages” from over the years.

“Yeah. That’s my thing,” he said. “That’s going to be my thing…I’m going to work on this sex tape for a year. I ain’t gonna put it out for like five years.”

However, in a 2019 follow-up with GQ, Tity Boi confirmed that ambition went out the window once he got married to Kesha Ward, but did say the streaming platform’s CEO had heard the song.

“I met the CEO of Netflix and he told me he appreciated the song and everything,” he said. “So that’s cool, full circle and everything.”

The B.O.A.T.S. II: Me Time single is perfect for a 2 Chainz Valentine’s Day playlist and includes memorable moments such as when 2 Chainz called 69 “a favor for a favor,” and described how he “fucked her on a pile of clothes. Now she a closet freak.”

Appearing in the third verse of Juicy J’s blunt coitus anthem “Having Sex,” 2 Chainz filled up his time with so many memorable bars about spreading his seed. “B-b-b-bust a nut on her, and that’s babysittin,” he raps at one point. “Skeeted on her chest and that’s a fuckin necklace” he raps later. Or there’s when Tity Boi kicks off his verse by hollering for no reason, “I don’t give a fi-nuck, put it in her gi-nuts!” a line that is sure to make anyone’s Valentine swoon.

“You In Luv With Her”

In his first collab with Atlanta’s YFN Lucci, the duo swap bars about certain qualities they appreciate in women, but in the third verse off this Daniel Son: Necklace Don deep cut, Chainz also takes a moment to show his support for sex workers. “If you tryna sell me that pussy then you a prostitute, cool!” he raps. He also expresses throughout verse 3 that he remains the “undefeated” champion of sex games and that his girl can perform oral sex even when she’s got “cottonmouth,” which is an image only 2 Chainz can conjure up.

The Latto-featured track “Quarantine Thick” was released at the height of the pandemic on 2020’s So Help Me God, and throughout the song 2 Chainz works to give a playful twist on the “quarantine 15,” presenting the weight gain as an empowerment anthem.

“I wanted to bring light to the situation, you know?” Chainz said of the single in a 2020 interview. “We was dealing with a lot of protests and inequality so I wanted to talk about something else that we were going through which was quarantining and eating crazy shit and gaining weight.”

With that said, Chainz still uses the track to sprinkle a boast about his unique skill set in the bedroom. Revealing that he’s from “where a nut will cost you 80 bucks,” he goes on to rap “I had that pussy pissin’ once I hit that kitty,” which is a 2 Chainz lyric so ludicrous, only Tity Boi could make it sound good.

Hailing from 2 Chainz and Lil Wayne’s collaborative effort Collegrove, “Bounce” finds both rappers trading vicious bars just for the sake of competition. As par for the course, both legends find time to drop some uniquely boastful lyrics about their sexual prowess throughout the song. But the crowning image comes when the Drench God spits, “I kiss ya lady, eat her pussy, then kiss the baby / Get situated, get keys off table, then leave her 80,” a braggadocious bar that’s as ostentatious as it is hilarious.

Enlisting the help of veteran bedroom-tune curator Chris Brown, Tity Boi uses the thick dubstep wobbles of “Countdown” to simply state in multiple ways how the time for sex is nigh. But it’s the track’s second verse where 2 Chainz really lets loose. “24/7, 365, when I’m in them thighs I memorize what I did when I’m inside / That in and out, that up and down, that side to side / I spray paint them walls, I vandalize,” Chainz raps, leaving little room for imagination. He then again showcases his uncanny ability at interloping sexual innuendos with eating. “Crab legs by candlelight, I break ‘em open like I break you open,” he raps.

This romantic 2011 Codeine Cowboy cut found 2 Chainz yearning for a connection deeper than sex with his latest fling. After he dumps his ex and “takes that ass out like gar-bage,” he aims to take his new love interest “to a pinnacle,” rapping in detail about how he puts “one leg up followed by the other,” and then compliments his girl’s intelligence in a way only 2 Chainz can. “Good head on her, you can learn a lot from her,” he raps.

Back when Mike Posner still classified himself as a casanova pop star, the duo made “In Town,” a 2012 bedroom anthem that is as provocative as it is sensual. “Baby I just landed, you gon’ pick me up,” Chainz raps on the first verse. “Heard you like to squirt, I might lick it up.” While the track is filled with quotable material, the kicker comes when 2 Chainz compares his girl to spinach fondue. “Dippin’ it like fondue, spinach dip, cheese stick,” he raps. “Appetizers, entrees, it’s you in that lingerie.”

Another track that paints — as an understanding and giving lover, the rap star teamed up with R&B loverboy Jacquees To close out his latest album Dope Don’t Sell Itself, 2 Chainz and fellow ATLien — R&B loverboy Jacquees, proved their understanding as giving lovers. Tity Boi again meshes food-related items with sex for hilarious results. “Take my shoes of and shawty gon’ chew me, talkin’ like Trident,” he raps. Elsewhere he warns that his girl might injure him. “Slap that ass too hard, I might fracture my wrist,” he spits.

If your significant other (or potential one-night stand) has the sense of humor to appreciate these lyrics, they just might be a keeper.