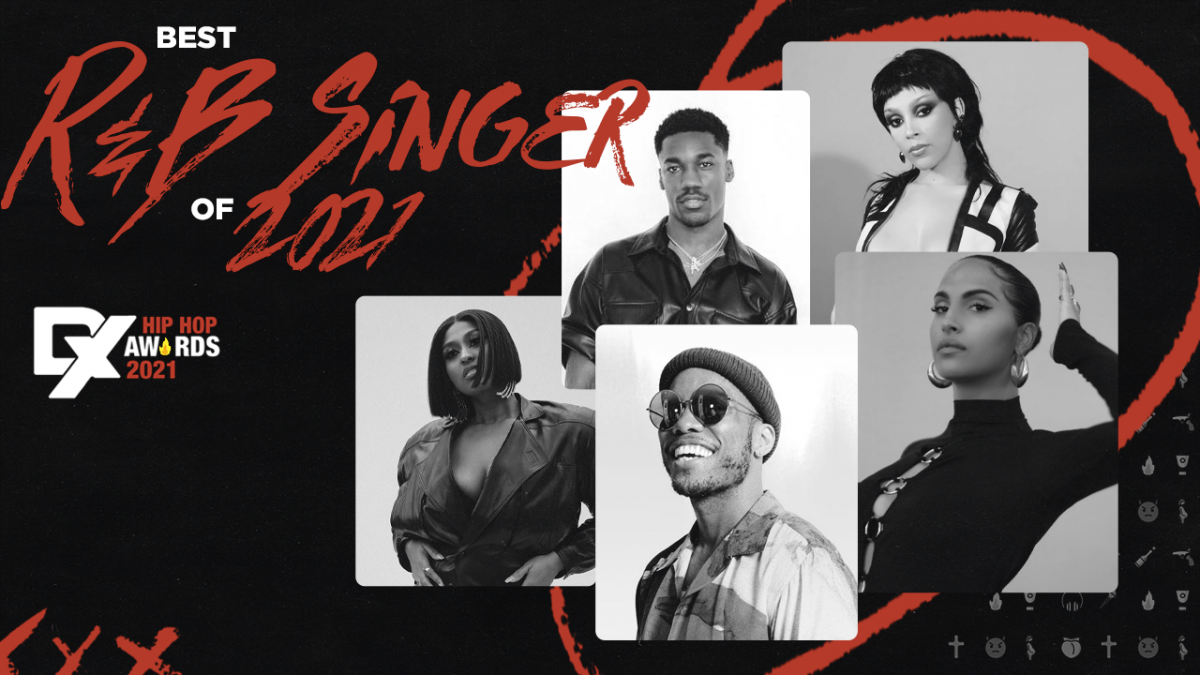 Debates about the vitality of R&B will continue to rage on, but in reality it’s clear that the genre’s standing in music is solidified. Where purists long for the days of R&B singers crooning in the rain with their shirts off, the current crop of stars have bucked tradition, utilizing a dizzying mix of styles to take the art to new heights. In another year where life became increasingly difficult, a few R&B stars soundtracked moments of emotional turmoil and celebrations of love and freedom with outstanding balance.

The nominees for Best R&B Singers of 2021 exuded comfort through their musings, granted listeners an outlet for their pain, and gifted the world songs and albums that have true staying power past the shortened attention spans of their fans.

Without further ado, here are HipHopDX’s picks for the Best R&B Singers Of 2021.

The Iranian-Swedish singer-songwriter solidified her status as a master of the break-up album in 2021. Coming off her smash record, Ugh, those feels again, Snoh capitalized off the momentum with her third studio album, Temporary Highs in the Violet Skies. It was another confessional masterpiece, with Snoh wielding her vulnerability to share vital lessons that she’s picked up following the painful and messy end of relationships. There’s only one artist that needs to be playing when you’re crying in the shower post-breakup and it’s Snoh. Peaking at No. 24 on the Billboard 200, and earning nominations for Best R&B album and Best R&B performance with “Lost You” at the 2022 Grammy Awards, Snoh combined her tender voice with beautiful songwriting to create audio comfort food. She also lent her vocal talents to the likes of English rapper Dave and Giveon on standout tracks “Law of Attraction” and “Last Time,” furthering her reputation as a hired gun for emotional intensity. For her beautiful voice, captivating charisma, brilliant songwriting and top notch features, Snoh Aalegra proved to be the queen in a strong crop of the best r&b artists in the game. However one feels about Silk Sonic and their nostalgia-fueled soul stylings, it’s impossible to ignore the starpower of Anderson .Paak in 2021. As one-half of the most captivating mainstream duo of the year, he oozed personality and matched Bruno Mars’ energy at every turn. The singles from An Evening With Silk Sonic elevated his commercial success to new heights previously unseen by Anderson. “Leave the Door Open” was in the running for biggest song of the year, peaking at No. 1 on the Billboard 100, going 2x platinum in the United States, and earning four Grammy nominations including Record of the Year and Song of the Year. If that wasn’t enough, “Smokin Out the Window” also peaked in the top ten on the Billboard charts. There was an undeniable magnetism surrounding every track Anderson touched in 2021. Doja Cat might be considered teflon at this point. Surviving vicious online rumors and one of the funniest tweets in the history of social media, the Los Angeles-based artist packed a busy 2021 with outstanding releases and features despite the outside noise. It began at the top of the year with her feature on Saweetie’s “Best Friend” and Ariana Grande’s “34+35” remix dropping within a week of each other. Through these tracks and her otherworldly collaboration “Kiss Me More” with SZA, she ruled TikTok’s algorithm with an iron fist. Her album Planet Her blurs the lines between R&B and Hip Hop as  she handles singing and rapping duties with ease, outrapping most of her peers in the process. The album peaked at No. 2 on the Billboard 200 as she collected chart placements and award nominations like infinity stones, staking her claim for most powerful artist on American soil. The Los Angeles-based singer burst onto the scene in 2020 with his special performance on Drake’s “Chicago Freestyle,” which was so good that it fooled listeners into thinking that it was Sampha upon first listen. His only 2021 release capitalized on the fervor surrounding his golden voice, compiling two EPs into one project, When It’s All Said and Done…Take Time, which peaked at No. 5 on the Billboard 200. But his biggest moments came as a featured artist, both on Justin Bieber’s megahit “Peaches” and Drake’s “In The Bible.” Hitching his trailer to these commercial giants once again did wonders for his notoriety, as his voice is likely to become  coveted for future hook responsibilities. He’s become a go-to when talking about some of the best r&b artists. Unequivocally, 2021 should be a considered a banner year for Jazmine Sullivan. The Philadelphia-born star released her first album in six years, Heaux Tales, and maintained an impressive run of commercial and critical success. She unleashed a daunting concept album, waxing poetic on topics such as sexual empowerment and the ideals of feminity with unabashed fervor. Her voice still holds the same weight as it did when she burst onto the scene in 2008, making it clear that she’s unlocked the key to longevity and refuses to share. Heaux Tales won Best Album of the Year at this year’s BET and Soul Train Awards, and is nominated for Best R&B album at the 64th Grammy Awards. The album charted like crazy, peaking at No. 4 on the Billboard 200 off the strength of powerful storytelling and transcendent singles, including the Grammy nominated “Pick Up Your Feelings,” the clear highlight from the album. The veteran continues her streak as one of the best r&b artists two decades running.

It’s been said before, but PinkPantheress did not make a bad song all of 2021. The British university student unleashed her transcendent form of bedroom, drum and bass music upon the world through delightful snippets on her TikTok page. Each track on her debut mixtape to hell with it resonated with the Gen Z sensibilities of emotionality and sensitivity, while also utilizing the pristine sounds of early 2000s UK garage to complete a delicious concoction.

Capitalizing off of a fantastic 2020 marked by a great debut album and a feature on the global, smash hit “Esssence,” Tems made it clear that she’s here to stay. Her EP If Orange Was a Place was a masterclass of emotional expression, exhibiting brave vulnerability in such a small space. She also showed on Drake’s Certified Lover Boy, carrying the Canadian on her back with her performance on “Fountains.”

Even without releasing a full-length project in 2021, the Columbia, Md. native remained at the forefront of the genre through several expertly executed moments. His high profile linkups with Tyler, the Creator, Drake, and the Neptunes captivated the masses. But his Dropbox loosies, including the standout “Circles,” and singles “Mercedes” and “Show U Off” displayed his penchant for tenderness and oddity, making each new track an intriguing must-listen. He’s become an in-demand feature and one of the best r&b artists out.