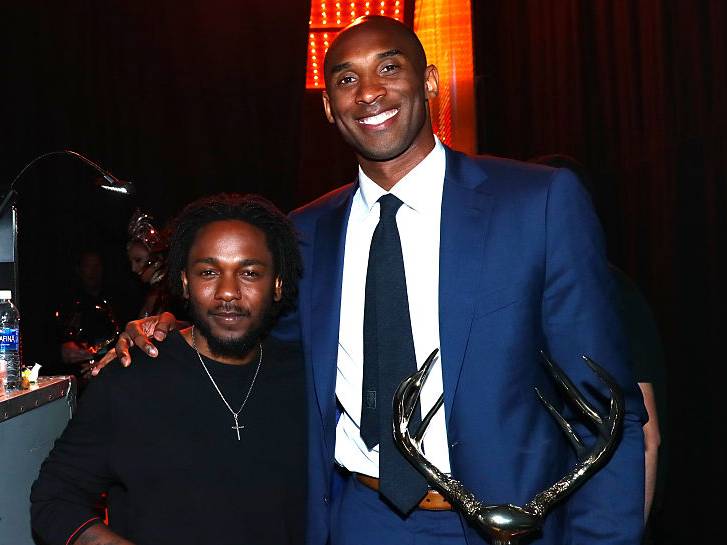 He not only inspired millions to play ball, but hundreds of artists to reference his likeness in their lyrics as well to better tell their stories.

Bryant was an aspiring rapper himself too near the early aughts, but he ended up mastering basketball instead of bars.

The five-time champion’s connections to the Hip Hop community were multifold throughout his life.

Bryant’s first connection to the Hip Hop community took place in 1996 when he was a high school basketball prodigy at Lower Merion High School in Philadelphia.

He befriended rappers in school, going as far as forming the startup group CHEIZAW, but the ensemble never really materialized throughout the years.

Then, like many before him, Bryant needed a date for the prom. In what was perhaps the first sign of killer confidence of his yet-to-be-developed career, Bryant courted platinum-performing R&B singer Brandy to chaperone him as his date for the high school formal dance on May 24, 1996. Thirty-three days later, the kid who had his No. 33 high school jersey retired was drafted by the Hornets and then traded the same night to the Lakers.

Brandy and Bryant both said they were nothing more than friends. Brandy was courtside cheering for Bryant as a rookie during the 1997 All-Star Game Slam Dunk Contest, which he won. Bryant later returned the support by appearing in an episode of Brandy’s television show Moesha.

All Eyez For Tupac

According to platinum songwriter Delray Richardson, Bryant and Tupac Shakur met each other in Los Angeles on August 11, 1996 at the House Of Blues.

The night was marked by a now mythical concert from LL Cool J and Outkast. A little over a month later, Tupac was gunned down and never got to see Bryant play in the NBA.

Bryant rode a lot of pine for the first couple of seasons on the Lakers bench as the Shaquille O’Neal-lead Lakers failed to make the NBA Finals in their first three years together. Then came the addition of coach Phil Jackson, and suddenly, the Lakers operated at the peak of their powers and avoided languishing by winning three consecutive NBA titles from 2000, 2001 and 2002.

Turns out, the NBA’s fourth all-time leading scorer was winning off the court during this era as well.

In 1999, during the making of Snoop Dogg’s Hip Hop trio “Tha Eastsidaz” music video shoot for the song “G’d Up,” Bryant met Vanessa. Soon after they were engaged, then eventually married.

Kobe didn’t waltz into Snoop’s set my accident. At the time, much rival teammate Shaq did before him, he was actively trying to kick off a side career as a rapper.

For one three-month stretch in New Jersey for the summer of 1998, Bryant lived in the mansion of Steve Stoute, the legendary record executive who helped kickstart the careers of Will Smith and Nas. Stoute later signed Bryant (and CHEIZAW) to Sony Entertainment.

In January 2000, Bryant debuted the self-titled single “K.O.B.E.” featuring model Tyra Banks. It was supposed to highlight the album Visions. Although “K.O.B.E.” had lustful lines like: “Uh, what I live for? Basketball, beats and broads, from Italy to the U.S., yes, it’s raw,” the opus never gained steam.

Bryant and Banks even took the stage during NBA All-Star Weekend to perform the song.

By the end of the year, Sony dropped Bryant from its roster, and neither party divulged details as to what exactly went amiss.

Bryant never relished the role of a supporting basketball actor, which was largely the reason he and Shaq had a rift throughout the years before eventually splitting.

In the studio, it was a whole different ball game. Bryant mostly had an unfulfilled music career, but he still lent his voice via verses, like once for a remix of Brian McKnight’s “Hold Me” in 1997 and another in 1999 for Destiny Child’s remix of “Say My Name.”

He also brought 50 Cent, Nas and Broady Boy under one roof for the song “Thug Poet.”

Not before, however, Bryant performed on stage in the House of Blues during a launch party celebration for the since-ceased company.

In 1998, Bryant appeared on “3 X Dope” for Shaq’s Respect album, but Bryant’s name wasn’t included in the credits.

Shorty after his passing, Shaq shared a post and a separate song on Instagram saying “my favorite Kobe moment was this night when we went to the studio with DJ Clark Kent and you blessed me with this 16.”

In 2011, long after his music career was all but over, Bryant left the mic at home and instead simply appeared in Chinese rapper Jay Chou’s music video. The duo even filmed a Chinese Sprite commercial together, as Bryant scratches the strings of his guitar.

Speaking of guitars, who can forget his lip-synching performance in a commercial for the video game Guitar Hero.

Bryant was a big boon for brands again shortly after he rehabilitated his image after sexual assault charges in 2003. He struck deals with a slew of sponsors and was the face for many companies, most notably Nike.

In a 2011 commercial, Kobe urged Kanye West to find even more success. The duo also spent time together in the studio years later, and Ye sat courtside for many of Bryant’s games, including his final 60-point swan song before retiring in 2016.

What Could Have Been

The second stage of Bryant’s life was barely beginning, most notably as a storyteller.

Then it suddenly came to a fatal stop.

Many believed Bryant was destined to have a performance in entertainment through his founded Granity Studios that would compete with his on-court accolades. He was already winning Academy Awards, investing in start-ups and leading vision for companies like Body Armor.

One can only now imagine he would’ve given the music industry another attempt in some capacity.

His competitive spirit possibly couldn’t allow for history to say he was never commercially successful in Hip Hop.