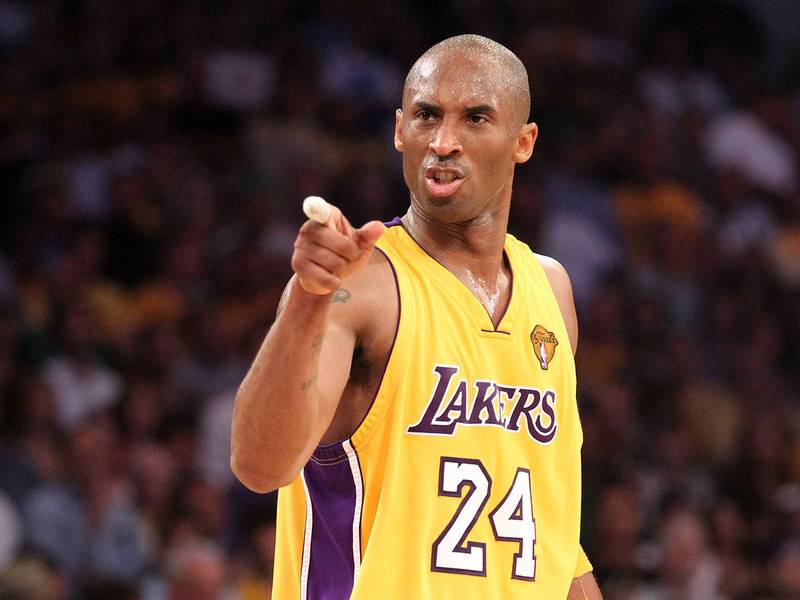 The late Kobe Bryant inspired an entire generation of basketball players, but he also influenced lots of rappers to spit bars and write rhymes like he swished buckets and dished dimes.

The five-time NBA champion had a passion for rocking the mic too, even wetting his whistle in the studio in a mostly forgotten rap career. He delivered the self-titled “K.O.B.E.” featuring Tyra Banks in 2000 with lustful lines like, “Uh, what I live for? Basketball, beats and broads, from Italy to the U.S., yes, it’s raw.”

Realizing that his fadeaway jumper was more proficient than his rhymes, Bryant focused on hoops and became a legendary player before he tragically passed away at the age of 41.

Black Mamba rap references in Hip Hop are aplenty, providing lots of options when it comes to selecting the best Kobe-inspired rhymes. So, here are 24 of the best references to Los Angeles Lakers legend.

“My mansion sittin’ on 40 acres
Who da neighbors?
Kobe Bryant from the Lakers
Now that’s paper.”

“You wanna get acquainted with me, you wanna know me
From three-point range with a Glock, I shoot better than Kobe.”

“I had dreams of the league, one day I’d play Kobe
Or walk up to Puff and he would really know me.”

“We hit the spot to chill with the Fuji Grill
She ordered the Kobe beef like Shaquille O’Neal.”

“I gotta keep my game tight like Kobe on game night
Like taking from a girl don’t know no better, I know that ain’t right.”

“Cleveland or Boston
Glad we playin’ Boston, put they ass in a coffin
Watch Kobe Bryant off em in the finals so often
Always on fire, keep em’ chunkin’ and coughin.'”

“Whether it’s the yay or the 9-to-5
The pills or the chronic, we hustle to stay alive
And if you ain’t Reggie Bush runnin’ a rock
You better be good as Kobe slangin’ a jump shot.”

“And this is what you all been waitin’ for
I’m the lost angel knockin’ on Satan’s door
What the fuck y’all take me for?
I love you ’cause you hate me more
I’m Kobe on the Lakers floor, except I give you 84
Shake you like Haiti’s floor.”

“Who you know did it like Kob’? 60 to go
That’s some cold shit, call it 60 below
I mean, he play like he got ice in his veins
Shoot it in ya face from far, man, that boy gotta be nice at the range
I talked with him twice at the games, once at the Trade it All video
I’d say we had a nice little exchange of words
He said, ‘You gotta come and spice up the games,’ say word?”

“Kobe ’bout to lose a hundred fifty Ms
Kobe my nigga, I hate it had to be him
Bitch, you wasn’t with me shootin’ in the gym.”

“You need to step off, take ya tennis shoes somewhere
And your sweatsuits and ya Kobe Bryant outfit, and go join the Lakers, square!”

“I ball, I ball, like Kobe in the fall
Put trophies on wall, rather trophies on my mantle.”

“I’m way too gold for this beef, feel like I’m Kobe, yeah
This right here is astronomical.”

“Now me and Kobe doin’ shots the night before the game
Still drop 40 with liquor in my system.”

“They try to take me out the game but I’s alive
It’s like a old Negro spiritual, but I mastered Toby
With a splash of Monster Kody, shoot faster than Kobe, nigga
You bastards know me, the one and only.”

“All these thots on Christian Mingle
Almost what got Tristan single
If you don’t ball like him or Kobe
Guarantee that bitch gonna leave you.”

“Where my ring and my confetti
I’m Kobe Bryant ready
Pink Rose and chronic smelly while I’m stumbling out the telly.”

“Versace my pinky, a brick on my Rollie
That Cali Ferrari, I’m feeling like Kobe.”

“My dollars was down, she left me for some Euros
Took my whole flavor, I call her Coke Zero
We were co-MVP’s like Kobe and Shaq
Left me for the Heat, we were winning back to back.”

“Chillin’ with the Laker, on the floor, fourth quarter
Four minute on the clock, Black Mamba with the ball”

“How it feel to wake up and be the shit, and the urine?
Naaaaa-na-naaaaa
Tryna get that Kobe number, one over Jordan.”

“And when it comes down to the recording
I must be LeBron James if he’s Jordan
No, I won rings for my performance
I’m more Kobe Bryant of an artist.”