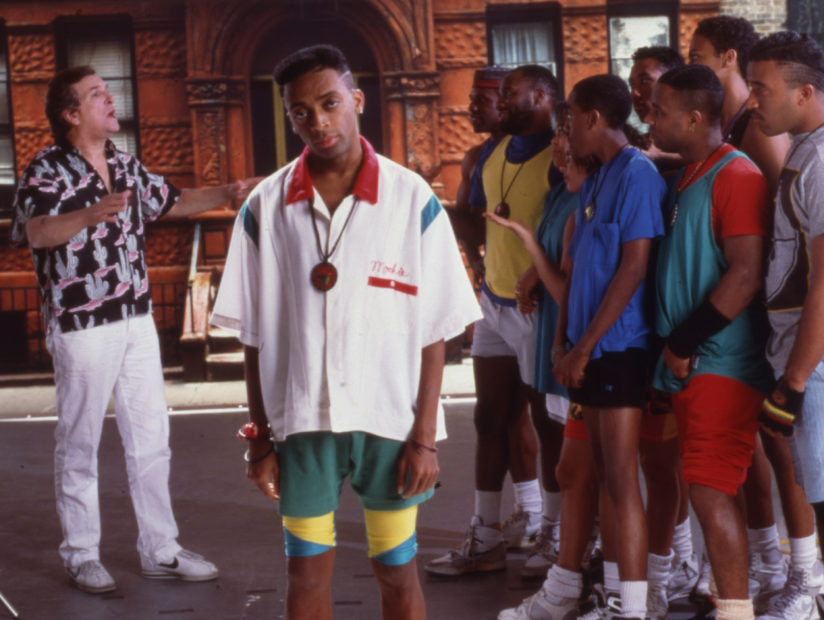 When Spike Lee finally won his elusive Oscar at the 91st Academy Awards on Sunday (February 24), it was an unequivocal win for Hip Hop, too.

The outpouring of pride on social media was apparent from Hip Hop legends including
DJ Premier, Chuck D, Busta Rhymes, and Swizz Beatz as the iconic film director nabbed a trophy for Best Adapted Screenplay of his masterpiece BlacKkKlansmen.

DJ Premier congratulated Lee and mentioned in his Instagram post that Gang Starr got their “first big check” in the music business and major record deal because of him.

In addition, Lee paid homage to his Hip Hop roots on Oscar night as he rocked patent gold Jordan 3s and the memorable “Love” and “Hate” four-finger gold rings. Each of these accessories were glaring nods to his roles as Michael Jordan’s original sneaker pitchman Mars Blackmon — also same character in his 1986 debut film She’s Gotta Have It — as well as the boombox-toting character Radio Raheem from Lee’s 1989 touchstone Do The Right Thing, respectively.

All fans and viewers and fans of Lee’s know that most revered films from the 80s and 90s have had a rap banger as their original soundtrack’s lead single. To celebrate the victory, we compiled the seven best rap singles from Lee’s film soundtracks.

Public Enemy – “He Got Game”

From the He Got Game Original Soundtrack

NBA Hall of Famer Ray Allen will always be remembered to moviegoers as “Jesus Shuttlesworth” because of his leading role opposite Denzel Washington in Lee’s 1998 basketball film He Got Game.

It takes place in (surprise!) Brooklyn’s Coney Island section, and Lee appointed his most storied collaborators Public Enemy to handle the lead single duties for the track that shared the movie’s title. Instead, P.E. went an extra mile to create an entire album for the film.

From The Best Man Original Soundtrack

The Roots began their “next movement” into the new millennium as one of rap’s top acts who put neo-soul at the nexus of urban radio and MTV when the latter was relevant to music fans.

When Spike Lee produced his 1999 romantic-comedy film The Best Man, the movie soundtrack’s lead single “What U Want” was assigned to none other than the Philly collective.

The track was also released on The Root’s live album The Roots: Come Alive that same year, but most people who saw The Best Man have it etched in their memory The track.

Black Thought reenacts the film’s premise of an African-American couple in love yet tensely at odds and unsure about jumping the broom together and being paired for life in matrimony.

From the Malcolm X Original Soundtrack

Arrested Development broke out as Afrocentric bohemians with their formidable 1992 debut single “Tennessee” to becoming one of pop music’s biggest acts that same year.

For Spike Lee’s seminal biographical film Malcolm X, he had Speech and his crew to provide the film soundtrack’s lead single “Revolution.”

The song fulfilled Arrested Development’s profile with clashing yet euphonic tribal drums, a looped baritone African choir chant, and straightforward recurring yelps throughout the song including “Revolution!” for its chorus.

Speech rapped with his melodious style over the resounding percussion grooves to counterbalance his lyrics of protest.

The song’s video exhibited African dancers and diaspora while sitting in a greenspace to suggest the group’s affinity with nature and them in a classroom to stress the importance of education. Also, there were several clips from the film cut into the video to accentuate its powerful message.

Lee has been a day one jazz torchbearer as trumpeter and composer Terence Blanchard has scored most of his films, including getting an Academy Award nomination for BlacKkKlansmen for Best Original Score.

For five minutes, Gang Starr’s late MC Guru provides an indelible lesson by poetically weaving through a laundry list of jazz impresarios and their stylistic sounds to span the evolution of jazz from it ragtime era of the early 20th century to bebop to fusion to modern jazz.

The song would become DJ Premier’s definitive production sound as he sampled a driving acoustic bassline, punchy drums and horns that sounded funkier, seductive and more danceable than the original records they were derived from.

“The 90s will be the decade of a jazz thing,” Guru said in the song’s final lyric. That line put the stamp on Gang Starr’s signature sound along with jazz rap and neo-soul acts thereafter.

From the Clockers Original Soundtrack

Spike Lee made an extension from his film Crooklyn to an updated portrayal of a mid-90s pre-gentrified Brooklyn with his first crime saga Clockers.

Similar to the track “Crooklyn,” Lee continued that track’s formula by assigning the hottest New York rap producer of the moment in 1995 and three Brooklyn MCs to create “Return of the Crooklyn Dodgers” to sell the film.

In contrast to “Crooklyn,” the Clockers soundtrack’s lead single was more melodic per Preemo’s East Coast style boom-bap production with orchestral cello hums and chiming bells to create an earworm for rap fans. Plus, Chubb Rock, O.C., and Jeru The Damaja represented BK in style with their hot takes on the residential demographics, drug trafficking, murder, corrupt cops and police brutality that grips their hometown.

Like the title of Brooklyn-born lyricists Skyzoo and Talib Kweli’s 2012 single “Spike Lee Was My Hero,” this movie and its lead single added to Spike’s most resolute “joints” on the silver screen and in every rap head’s stereo.

From the Crooklyn Original Soundtrack

The borough of Brooklyn, New York has countless dedication rap tunes since the 80s such as “Brooklyn’s In The House” by Super Lover Cee and Casanova Rudd, “Brooklyn Bounce” by Daddy-O and “The Place Where We Dwell” by Gang Starr.

However, none of them match the underground grit and resounding, jazzy swing of “Crooklyn” that shared the title for Spike Lee’s 1994 semi-autobiographical film.

The movie was a tale of the director’s childhood being reared in Brooklyn during the 70s. The track “Crooklyn” was produced by Q-Tip, who laced it with his signature touch of A Tribe Called Quest’s pounding duple snare drums, thunderous low-end and a four-note piano groove splashed on top to make anybody get sweaty on the dancefloor.

Similar to the film’s theme, the song’s video and Brooklyn natives Special Ed, Buckshot of Black Moon and Masta Ace take listeners down memory lane with clips from the film, old school and afro-filled Soul Train episodes and lighthearted tales of growing up in the ghetto. As the MCs romanticize about their beloved hometown, they juxtapose the dangers of living there in the present day.

From Do The Right Thing Original Soundtrack

In 1989, Spike Lee told Public Enemy frontman Chuck D that he needed an anthem for his magnum opus Do The Right Thing. And P.E. damn sure didn’t fall short of that standard.

Their enduring single “Fight The Power” transcends the film as one of Hip Hop’s most powerful battle cries and the crown jewel of Public Enemy’s 30-plus year catalog.

Lee directed the song’s outstanding visual in the movie’s setting of the Bedford-Stuyvesant section of Brooklyn. It emulated the March On Washington in 1963 where Dr. Martin Luther King gave his “I Have A Dream” speech, and Malcolm X’s towering image alongside the P.E. logo on the stage underscored the militant Black Power salute with thousands of fists pumped in the air, ready to start a riot like the film’s climactic scene.

The song was originally supposed to be Spike’s suggested rap version of the African-American national anthem “Lift Evr’y Voice And Sing.” But we are so glad P.E. detracted from that idea and won that argument over Spike.