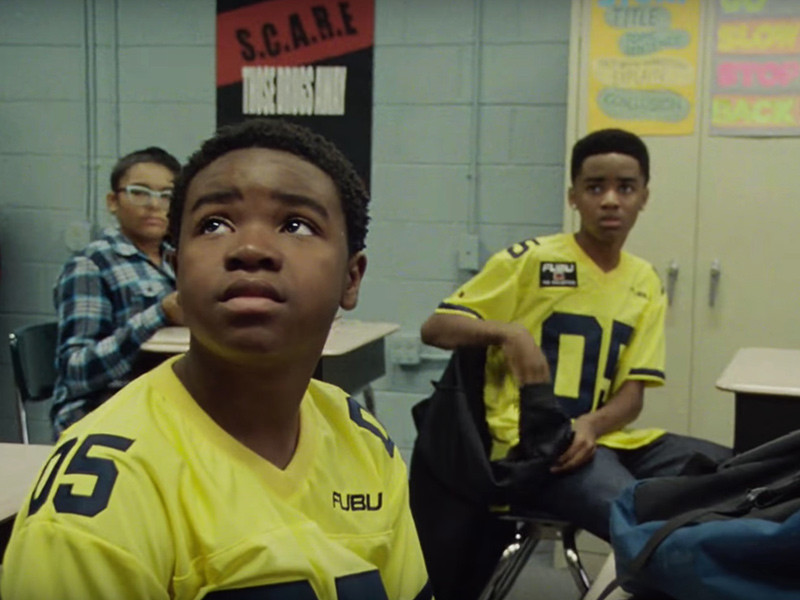 As we learned from the “FUBU” episode of Atlanta Robbin’ Season, Alfred’s been looking out for Earn for a long time — and it’s clearer having watched them as kids that it was mostly a one-sided situation. There’s a history of Alfred stepping in to save Earn and then causing negative results for both of them, and it goes all the way back to the late ’90s.

In this episode we saw one of the early and most consequential examples of this, as told through the lens of middle school, that period of life most of us can agree really sucked. And we watched as Alfred took responsibility for providing cover for Earn, and sticking with him when he needed backup over the authenticity of his new (fake) FUBU shirt. It certainly added context to last week’s “North Of The Border” episode, in which Alfred decided he was tired of having Earn’s back to the point of basically carrying him.

We got a few cultural cues, including the Aquemini poster above Earn’s bed and Alfred’s Dragonball Z reference, that this was around 1998, the time when OutKast, Goodie Mob and Atlanta mayor Bill Campbell reigned supreme. But regardless of the year, this episode definitely looked and felt like sixth through eighth grade, from the school’s bland brick buildings to the awkward looks of pre-assimilation on the kids’ faces.

It was a study of the time when all most of us wanted was to fit in as we began to understand society’s inequities. As we saw throughout this relatively shorter episode (we’ve gotten used to 40 minutes or so ever since “Teddy Perkins”), this period can be foundational to our adult understanding of how we value each other, and our treatment of people in the same places we were then, and where we find ourselves today. It’ll be interesting to see where this idea goes, if anywhere, in next week’s season finale, but it feels connected to something that’s coming.

I remember middle school’s feeling of being constantly denied pride, and trying to avoid certain personalities, just for the reward of holding on to a little bit of self-worth over a 7-hour day. I loved that the bullies’ “Fee-Bee” jokes weren’t even funny, but that it didn’t matter because as older, stronger boys, they were in a position of power, at least in terms of giving Earn a pass or turning him into a walking joke. The male cooks behind the lunch line made sure to eyeball Earn’s fake jersey and smirk at it too. Even the substitute teacher Mr. Ailey (who it turns out is my cousin Walter K. Jordan, who I knew was an actor, but had no idea he would show up in an episode of Atlanta), isn’t spared Chris’ insults, or his own insecurity about being made fun of in front of heartless children.

Bullying, self-esteem, herd mentality, and just getting through the day when you can feel the world beginning to turn on you are unfortunately just part of the general struggle of adolescence. Everybody’s hurting, and one by one the kids are being robbed of their innocence. And sorry to have to point this out, but this is a predominantly black show based in a predominantly black city, and yes, the experience for black children is even worse.

This episode went into all of that, as well as the pressure black kids feel to avoid existing at the absolute bottom of the food chain for ‘tweens. And one of the first things you learn in middle school is the importance of looking the part. I thought the shirt Earn wore while shopping with his mom was cool — it was a denim button-down with faded, multi-colored horizontal stripes that I’d quickly rock today. Of course now I’m also a grown man who feels much more like Earn’s white friend in terms of shirt-recycling. But I certainly remember the power of brands, especially on kids between the ages of 10 and 12.

Even the white kid’s shirt (by the way, was that a young version of Dave, the radio station intern from Season 1’s first episode?) was quietly a signal of class separation. Sure, it seemed like he didn’t care, but here in Atlanta, when you see someone wearing a shirt branded with The Salty Dog Café’s logo, it’s actually a status symbol. The restaurant is located in Hilton Head, South Carolina, and in ATL you’re more likely to see its apparel worn by wealthier frat-boy types than African-American youth, since it kinda says, “My family can afford to take me on pricey vacations in cities that were kinda stolen from Gullah-Geechee people, but you know… no big deal.”

Also, did you notice the other symbol in the background of the lunchroom while Earn was eating? If you looked to your far left, you could see that back then, before 2003, a public school would still fly the Confederate battle flag. It was embedded into the state flag of Georgia; even now Georgia’s flag is a play on the “stars and bars.” In that frame, Earn was sitting between symbols of America and the racist history of the South, trying to make sense of it all. And when you’re stuck between a rock and a hard place, and you’re still a kid, you’re forced to learn how to adapt if you want to survive.

We as viewers could see the nature of things better than Earn, maybe even before his classmates began questioning the authenticity of his yellow FUBU jersey. Devin, a classmate, arrives at his desk just after Earn, wearing a similar jersey but with different features, and the faux pas kicks off a schoolwide scandal that locks both of the temporary fashion twins into a one-day battle for self-preservation. Earn goes from being seen favorably by all of his friends to being ridiculed as everyone tries to figure out if they’re going to gang up on him or Devin. That includes Chris, the class clown (definitely this episode’s biggest jerk, who even laughed at the tragic news of Devin’s suicide at the end), and Erica, the girl who’s not yet sure Earn’s FUBU is fugazi, and therefore whether or not she likes him.

Full disclosure: I laughed at Erica’s friend’s third note about what kind of dudes she doesn’t date. But I also felt the loss of childhood purity when I watched “FUBU” a second time, paying closer attention to Devin for signs of pain. The glance he gave Earn from across the room, after Earn pulled the thread and created a small hole in his Jersey, looks totally different when you go back and watch it again. First it seemed like Devin knew he now had the upper hand. But he never even mentioned it, which made it clear it was more of a connection to his fellow weirdo, whose strategic fashion statement had miserably backfired.

Once Alfred stepped in to be the definitive judge of FUBU brand substantiation, we saw the true nature of people. The friend who needed to copy Earn’s math homework, but wasn’t even sure he should be sitting by him at lunch, came around instantly, as did Erica. All it took was the right person, Alfred in this case, to speak up for him. And it was a sign of Alfred’s early understanding of how the world works, and also his indifferent approach to dealing with it. “Confidence is the key,” he tells Earn at the lockers. The counsel of Alfred and Earn’s mothers at the end of “FUBU” captured the reality of the episode’s message: “You are a black man in America. When you meet people, you need to look good. Your clothes are important.”

Rounding out the episode was Denisha, the young lady who couldn’t stay awake in science class and gave the teacher what could easily be reported as a menacing stare. The next day, just after the announcement from the principal that Devin committed suicide the previous night, Denisha walked in full of nerve-wracking energy, shooting her hand up when the same teacher asked for a volunteer to read from her book. Earn noticed, and turned slightly toward Denisha, and seemed to know that something wasn’t normal. My guess is Adderall. Who knows if it was the teacher of Denisha’s parents who recommended the prescription, but we all got to see how quickly a decision can be made to put kids on drugs.

Atlanta was precisely on point with middle school’s terrible lack of empathy, from Alfred’s locker thievery (again, Robbin’ Season) and selling stolen goods back to original owners (not to mention his shaming of snitches), to Earn’s willingness to let Devin take the fake FUBU fall, even though Devin’s was obviously the authentic jersey. When we see Devin getting heckled as he climbs on the bus, and Earn watching as the scene slowly fades to black, we see something between relief and guilt on his face. Back in the middle school days, if you could avoid mob any escape from the bottom was welcome, even if it meant someone else got pulled down.

Donald Glover directed this episode, and did an excellent job of recreating a bluesy visual vibe through movement and light, from the way kids interacted throughout the hallways, to the ugly fluorescent radiation of the classrooms’ lamps. He also used music of the ‘90s to express early-teen angst, specifically “Give Me One Reason” by Tracy Chapman, “Passing Me By” by Tha Pharcyde, and “If I Ruled The World” by Nas and Lauryn Hill.

“FUBU” was an unexpected reminder of all those early signs of judgment surrounding us back then, and how it doesn’t necessarily go away when you grow up. We already know where Alfred and Earn have gone from here, but this episode was a great setup for where they go as Robbin’ Season comes to an end.