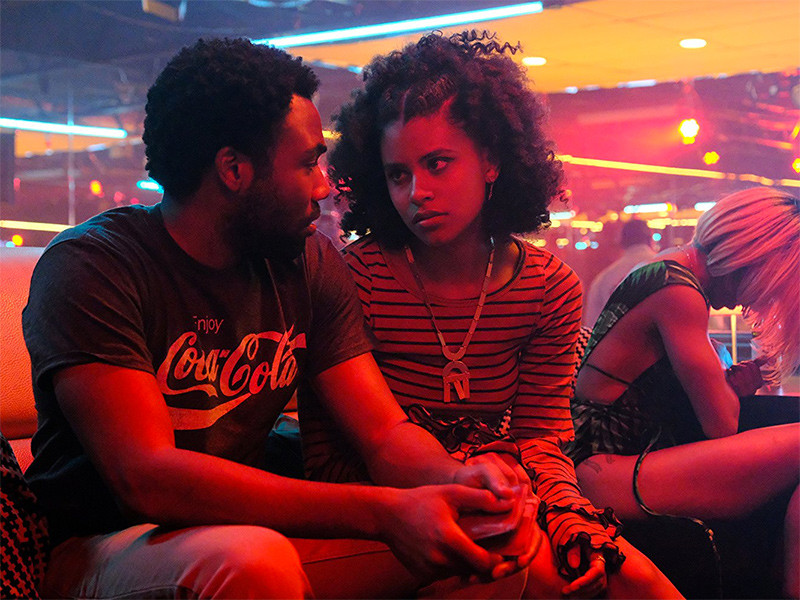 Every major city has a vice that the rest of the world has at least heard about. In Atlanta, that vice is the strip club. Atlanta went in last night, and somehow we all came out a little smarter.

What makes “Money Bag Shawty” special is that it looks at all the ways black spending power is treated and tricked back into the system in Atlanta and cities like it. Tourists who’ve heard the songs and memorized the landmarks are ready to spend, along with regular locals who like feeling wealth and its illusion of self-worth, even if only for one night or weekend. And there are plenty of people willing to help Earn rid himself of the financial windfall he and Alfred received from their dealings with Fresh after last week’s “Sportin’ Waves” episode. But we see that even though money is supposed to be an equalizer, sometimes it’s still looked on with suspicion when the hand that passes it contains ratios of melanin higher than half.

This week gave us the return of Van, who is as beautiful and vivacious as we remember her from Season 1, and who serves as a constant reminder that Earn may be an underdog we love, but he’s also dumb for not locking her down. But it’s interesting that after striking out all over town, they finally end up going to Onyx, Atlanta’s popular strip club in the Cheshire Bridge red light district. The fact that it’s no big deal that Earn, Van, Alfred and Darius all hit the club together is a very real observation of how Atlanta’s dating culture has historically worked. This city has been averse to slut-shaming strippers for generations (just visit Clermont Lounge for proof), and women not only tolerate their significant others visiting these spots – they’re quite comfortable tagging along. The fact that Van never tripped about the surrounding scene at Onyx was very much true to ATL.

Also, let’s state the obvious: there was only so much longer Atlanta could front like it wasn’t going to take us to one of the city’s famous “shoe-modeling establishments.” If you’re going to knock this episode for finally making the show seem somewhat predictable, this is your moment. But I’d argue that it seems more like you can now tell the show has a larger plan, and tonight was the beginning of what could be the emerging road map for a series that plays out more like a Kendrick Lamar album than, say, Black-ish. I wouldn’t say we now have a sense of predictability, because Atlanta feels like it could eff around and somehow send the whole cast skiing next week and somehow pull it off. But with something so closely tied with historical local identity, we can look back and begin seeing a pattern of how the show sees its responsibility to include real landmarks and activities that represent the actual Atlanta that a lot of residents and visitors know is there but might be afraid to look around at with open eyes.

These guys are rappers, after all. Why the hell wouldn’t they be in a strip club in Atlanta? Strip club culture is deeply embedded in Southern rap, and Atlanta culture. In other breaking news, water is wet, and Atlanta traffic is bad.

Yet this episode still finds ways to make hilarious strip club observations that seem familiar even to lapdance teetotalers, but aren’t easy for mainstream international publications to pick up, no matter how often they’ve tried in the past. Years ago, I edited a free publication that covered Atlanta strip clubs and was distributed around town, sometimes in those bins right next to Creative Loafing and other free weekly rags now gone with the wind. I got to know the environment pretty well, from the locker rooms and DJ booths to secret rooms the general public probably never knew about. I also dated a young lady at Spelman who became an exotic dancer, so I got a very early look at what goes on behind the scenes. Let’s just say it’s grimy, in ways much worse than a five-second lapdance.

But having that experience taught me one incredibly important point that I’m happy to see Atlanta dig into: If you go to a strip club in Atlanta, you should expect to be robbed. And I don’t mean by the robbin’ crew setup outside Blue Flame or those guys across from Babes on Fulton Industrial have been looking at you for what Big Boi of Outkast might say is “too long.” I mean by the entire cast of characters you meet from the moment you step foot in the door. These places are businesses, and they are part of an industry designed to take as much money out of the pockets of customers as possible, and they are exceedingly successful at doing it, because people buy into the experience. Atlanta doesn’t have casinos, but it has strip clubs, which work very similarly. Whether we spend the money out of insecurity or we approach them for experiential value – maybe throwing money in the air is a celebration we’re willing to pay for in kind. Or maybe it’s just as simple as Alfred says while leaning on the club’s couches: “Money is an idea, man.” But I love that this show kept it very real about the true nature of the booty club: once you’re in there, the roles reverse. It will be you, not the lovely and talented lady on the pole, who will wake up the next morning realizing how many dollar bills you peeled off your bottom (line) last night.

Speaking of dollar bills, the moment when the theater lady didn’t take Earn’s $100 was also uncomfortably familiar, as well as her acceptance of the same bill from a white corporate type, whose quick willingness to escalate made the moment feel like a “Stand Your Ground” event, particularly the white guy’s creepy, careless smile. Like the movie Get Out, Atlanta has moments where fear and comedy combine for an eeriness that you can’t mimic if you haven’t lived it. And one person we know hasn’t lived it is the crying Christian mommy blogger from the show’s opening scene who’s heard Paper Boi’s song and took offense. It’s a parody of the viral video posted by a similarly emotional mother reacting to a Vince Staples song she heard on the radio, and how Hip Hop culture smartly uses adversity and controversy to its own marketing and promotional benefit.

Of course everyone is talking about Michael Vick’s show-ending cameo, and not everybody gets the relevance, but when you have a show full of perennial, ahem, underdogs, striving through random hustles in a way that’s as entertaining and insightful as Atlanta, you can get someone like Vick to make a respectfully self-deprecating appearance, and the intended audience will appreciate it.

Sure, at the end of the show, Earn is once again down on his luck, having been robbed this episode of a little more optimism and a lot more money, but he’s still got his lady and his friends, and they’re all still showing us true life, in all its unpredictable humor, in a truly magic city.