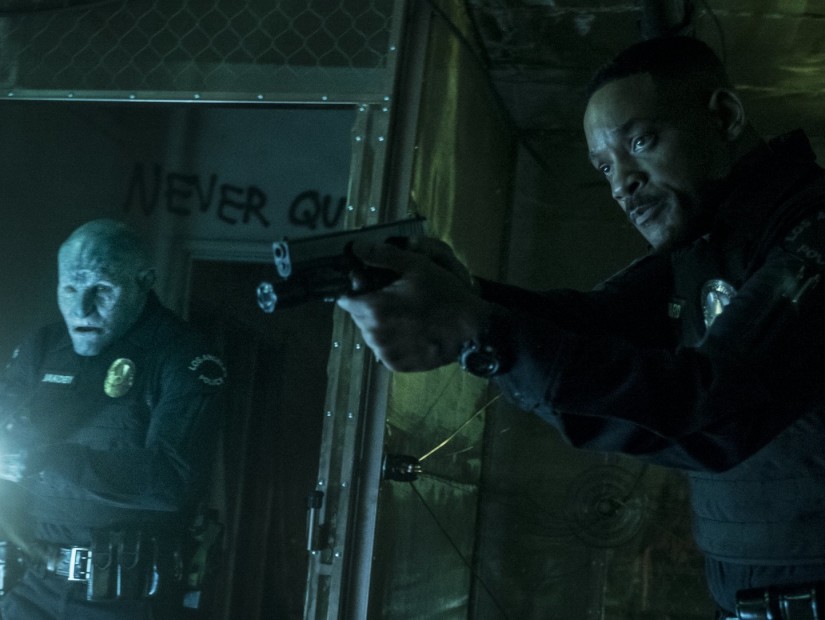 Review: Will Smith’s “Bright” Is Never Fun But Piles On The Sci-Fi Shootouts

Despite a lot of unfulfilled plot changes, its inexplicable dystopian settle where Middle Earth meets South Central, there is a lot of good fluidity seeping from Netflix’s newest golden child, Bright’s core center.

The sci-fi cinematic thriller places Will Smith at the center of its emotional fixtures and leaves the veteran A-lister an intriguing — if not forgettable — starring performance. His character, LAPD officer Daryl Ward, is often withdrawn, blunt and stern, and never fully allows for Smith to take advantage of the charismatic charm which has earned him millions and won over millions of audience members along the years.

It’s not as if the script allowed for such diversity in acting dynamics. Written by Max Landis (Victor Frankenstein) and directed by Smith’s Suicide Squad commander David Ayer, the film often finds itself too deep in its end-of-world urgency that it doesn’t allow for its talented cast to ever delve into any real chemistry. Ayer enters the Bright universe with a filmography predominately rooted in cop dramas; which often focus on the crooked under dealings a percent can endure. And Bright feels like a hodgepodge of most of them, namely Keanu Reeves’ 2008 antihero flick, Street Kings where a targeted bullet isn’t just meant for the bad guys.

The underlying theme of racism (or this case speciesism?) is Bright’s biggest redeeming quality for the film incorporates a world where orcs, fairies, Black people, elves, and magic are expected to coexist without the disturbing the peace. Longtime character Joel Edgerton adds humility to such an odd world as Ward’s partner, Nick Jakoby, an orc rookie beat cop whose presence in the LAPD looks to break down layers of bigotry but also gives off feelers that he may have been responsible for Ward getting shot months prior to where the movie crash-lands its opening.

Will Smith’s Movies Ranked From Worst To First

From there, incorporations of Mexican street gangs, a badass trio of evil elves (led by Swedish actress Noomi Rapace who shines with deftly emotionless performance) reminiscent of the ruthless Agents from The Matrix trilogies, an unpredictable magic wand and the token “human key” (played by Australian actress Lucy Fry) all vie for top-billing camera time. It truly is a jumbled rollout but choice curse words and an endless supply of shootout scenes won’t allow viewers to claim boredom.

Not to be overlooked but cinematographer Roman Vasyanov and the rest of the production time earn points for the movies color codes, especially when it comes to the rich and dazzling colors that are used to personify all magical elements. The score-and-soundtrack combo also proves useful in assisting with the various intense scenes, thanks to superfluous rap ‘n roll hybrids all the same. Netflix’s generous budget obviously helps matters but the shortsightedness of releasing such a dark, brooding thriller over the holiday season won’t earn Bright any legacy points down the line.

Truth be told, with its cast talents, special effects and hunger for gunfire, Bright could have been a classic video game but settles in just for an O.K. movie. With rumors of a sequel already being circulated, it will serve as a suitable clay mold to build into something greater if everybody can stay on the same script page.