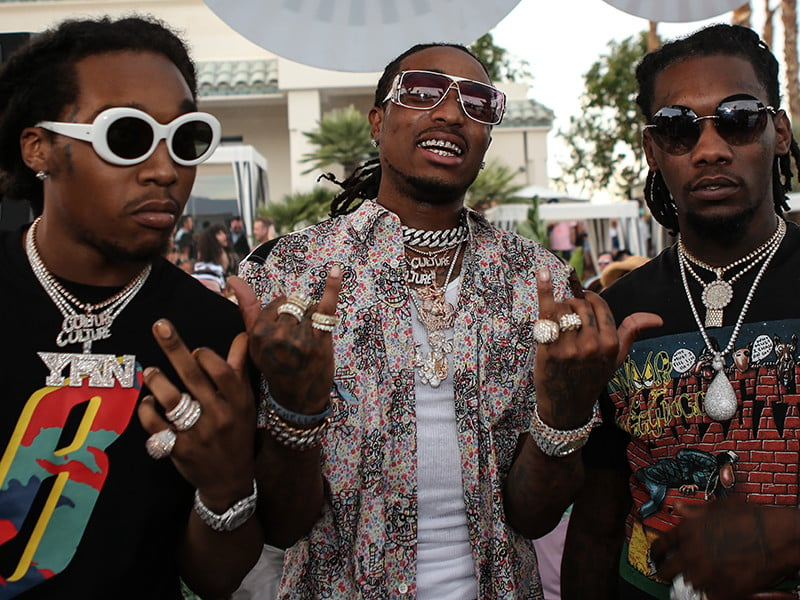 With every new pop feature they secure, the Migos edge closer to superstardom. Calvin Harris, Sean Paul, Katy Perry — everyone wants a taste of this Nawfside magic. Even as Quavo, Offset and Takeoff explore solo opportunities, they move as one unit. The trio exudes charisma and their chemistry is undeniable. Their freestyles are mesmerizing, functioning as if they share a single consciousness, and even their sense of fashion is distinct, yet equally impressive across the board.

But one roadblock they’ve yet to overcome, is people not being able to distinguish between the three of them. There’s an argument that there are some racist undertones to these consistent mix-ups, but Pigeons & Planes just did some street interviews on the topic and even so-called fans had trouble telling them apart. So let’s give people the benefit of the doubt and just assume not everyone’s been rocking with the group since the days of impromptu homemade music videos in front of their iconic fish tank.

Since multiple media outlets and the fans themselves have misidentified these strikingly unique rappers, we’re here to hopefully clear things up moving forward — for the sake of the culture.

Born April 2, 1991, Quavious Marshall is the oldest of the three. He’s also Offset’s cousin and Takeoff’s uncle (yes, you read that right).  All three were born in Lawrenceville, Ga. and were often under the care of Quavo’s mother. Quavo went by “Crunk Boy” in the eighth grade, relentlessly passing out CDs of his early work around middle school, despite Offset being his only true fan. In return, he even wrote Offset a verse or two, trying to encourage his cousin to pick up the mic, before all three of the boys formed what would be known as “Polo Club” (because, you know, Polos used to be in style).

During his time in high school (before he dropped out in senior year to pursue music full time), he went from backup to starting quarterback for the Berkmar High School Patriots, throwing three touchdowns during the Homecoming game — coincidentally, the team’s only win that season. Here he is, just a few months ago, swishing a football from like 30 yards away in a frustratingly nonchalant manner:

The running gag is to compare his looks to those of fellow Georgia native Jacquees, but he’s about a good eight inches taller (no offense to the Rich Gang crooner — these are just numbers!). Although they all rock a blinding assortment of jewelry, Quavo’s go-to accessories as of late seem to be his diamond grills and a couple of CULTURE necklaces alongside distinct Yoda and Ratatouille chains. He proudly reps a “YRN” tattoo above his left eyebrow and is practically guaranteed to be sporting a pair of flashy sunglasses, whether they be Versace, vintage Bugatti, or a pair of 9FIVE flip glasses (in 24K gold, of course).

With his stacked resume of feature appearances, chances are you’ve heard him even if you didn’t know it. He’s the one on Drake’s “Portland,” Post Malone’s “Congratulations,” Meek Mill’s “The Difference,” T.I.’s “Black Man,” Young Thug’s “F Cancer” and many more.

Younger than Quavo by about eight months, Offset was born Kiari Cephus on December 14, 1991. Due to multiple run-ins with the law, circumstance has painted him as the bad boy of the group. He’s been absent for many crucial moments during the group’s rise to stardom (including the whole “dab” craze), leaving Quavo, the eldest of the three, as the de facto face of the act. But ever since his return to the scene in December 2015, Offset has been on a tear and has quickly established himself as the next household name from Migos.

Menacing rap skills and vibrant fashion sense aside, he also used to have b-boy aspirations. Those dance moves in “Bad and Boujee” were no fluke…

Offset’s got “Blessed” inked above his right eye, a cross (issnota knife) on his left cheek, and an Eiffel Tower tattoo accompanied by a vertically stacked “YRN” tat on the far side of his right cheek. Having gone through a whole spectrum of colors and styles in the past, Set’s hairstyles are definitely the boldest. Nowadays, you can see him growing out his dreads so he could boldly rock Princess Leia-type buns at the Met Gala. He’s literally got an “Offset” chain, and he usually rocks at least one CULTURE chain — but his trademark neckpiece is the “Rain Drop” — inspired by the lyrics to their #1 single, “Bad and Boujee.” (Designed, of course, by Elliot Avianne of Avianne & Co Jewelers). He’s also likely to be sporting a whole slew of choker chains and vintage Bugatti 508 frames.

As for how to recognize his verses, he has more of a throaty, baritone growl and typically gets introduced with an “Offset” adlib before he jumps into a track.

Finally, the youngest — and most overlooked — of the three. Born Kirshnik Ball on June 18, 1994, Takeoff has always seemed comfortable taking the backseat to his relatives. People seem to forget that up until Offset whipped up “Bad and Boujee,” the biggest Migos hit to date had been “Fight Night” — a song anchored by Takeoff’s anthemic hook. He’s always picked up the slack whenever Offset’s been caught up in legal issues. On wax, if Quavo is the melodic soul and Offset the streetwise bard, Takeoff is the loose cannon. If “Call Casting” and “Bad and Boujee” are Quavo and Offset’s concoctions respectively, the modern day dope boy anthem, “T-Shirt,” would collapse without Takeoff’s defiant hook and verse.

With the most unique voice and an affinity for double-time tongue twisters, his lack of marketability can only be attributed to his lack of eccentricities outside of the booth. Always cool, calm and collected, with a pair of shades typically masking his eyes, the youngest Migos member might often come off as the most mature.

Since he’s not as visibly inked up as the other two, Takeoff’s long, overflowing dreads are probably his most distinguishing characteristic. He seems to have a taste for colossal pinky rings and impressive, gold-faced Breitling watches. While he used to loyally rock QC (their label, Quality Control) or YRN chains that displayed all three of their likeness, he recently copped one of the most ridiculous pieces the rap game’s ever seen: